Thor Hanson is the author of the new book Hurricane Lizards and Plastic Squid: The Fraught and Fascinating Biology of Climate Change. His other books include The Triumph of Seeds. A conservation biologist, he lives in Washington state.

Q: What inspired you to write Hurricane Lizards and Plastic Squid?

A: The iconic image of a polar bear stranded on a shrinking iceberg has become shorthand for how climate change impacts plants and animals. In a sense, you could say I wrote this book to get beyond the polar bear!

I wanted to explore the flood of fascinating studies showing how species of all kinds are doing everything they can to cope - moving, adapting, even evolving in ways we can observe and measure.

Researching this book convinced me that curiosity is a powerful and necessary tool in the effort to combat climate change. After all, it’s hard to solve a problem if you aren’t even interested in it.

Q: In the book, you write, "When faced with a climate challenge, species don't simply give up--they do all that they can to adjust." What are some examples that particularly struck you in terms of species' adjustments to climate change?

A: Story after story boils down to flexibility. The species that can adjust and improvise have a real advantage over those with only one way of doing things.

I’ve been inspired by rapid, climate-driven changes in feeding habits for everything from tiny arctic seabirds to the brown bears of Alaska’s Kodiak Island. 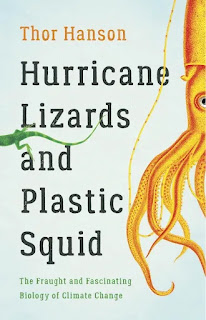 I’m amazed at how butterfly fish on coral reefs can fundamentally change their behavior, switching overnight from aggressive and territorial to meek and passive depending on the health of the corals they feed upon.

And simply the number of species on the move is astounding. Over 30,000 range shifts have already been recorded, for everything from birds and whales to things we normally think of as stationary - barnacles, trees, mushrooms, and more.

Some stories are alarming, and some situations dire, but never do we find nature standing by. The biology of the climate crisis is dynamic, fascinating, and always active.

Q: What do you think humans can learn from other species about how to handle changes in our climate, and what do you see looking ahead?

A: Understanding the biology of climate change does not make scientists worry less about the crisis, but it does help us to worry smart.

Resources for research, policy, and conservation are all scarce, so it’s vital that we know which species are more resilient to rapid change, and which are most at risk. Emotional capital is also limited; we also benefit at a personal level when we know where to focus our concern.

A: The title was chosen to evoke two compelling stories from the book that really capture the breadth and speed of nature’s response to climate change.

The “hurricane lizards” are a species native to islands in the Caribbean that have evolved larger toe pads and stronger front legs to hold on to branches during strong hurricanes. And biologists measured a significant step in that change during a single field season - survival of the fittest in action!

“Plastic squid” refers to the Humboldt squid population in the Gulf of California that utterly transformed their lifestyle to cope during marine heat waves - eating different foods, maturing twice as fast, living half as long, and reaching only half their former size.

All of those changes happened immediately, an inherent flexibility to change their habits and bodies that biologists refer to as “plasticity."

A: I’m hard at work on a new book, and also making an ongoing series of ultra short (<1 minute) natural history films for the PBS show Nature to share with their large social media following.

A: We should emulate wild species and start doing everything we can to combat climate change. If lizards can evolve and squid can transform their bodies in response to this crisis, then it stands to reason that we can change the behaviors that are bringing it about.