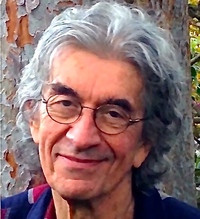 Rick Lenz is the author of the new novel Hello, Rest of My Life. His other books include the memoir North of Hollywood. He spent many years as a stage and film actor, and is also a playwright. He lives in Los Angeles.

Q: What inspired you to write Hello, Rest of My Life, and how did you create your characters Danny and Samantha?

A: I have had two totally involving passions, one is my love of acting (and part of any success in that world is living in an ever-competitive arena). My other passion is my love for my wife Linda, whom I didn’t meet until I was 40, when most of my acting success was behind me.

My two passions never significantly intersected in sequential time. I realized that if I could bring those passions into the same moment, one of them would probably take second place to the other, and if that runner-up was now in the same time as the other passion, which of the two would it be … I had the meat of my story.

Danny has to make a choice between acting success and life with his wife Samantha. He can’t have both.

A: I love improv. I also love a story that ends in a way that when readers finish the book, they realize it always had to end that way. The trick is to give them the “It- had-to-end-this-way satisfaction,” while at the same time keeping the improv ball up in the air as the story unfolds.

With Hello, Rest of My Life these things came together in an organic way I can’t explain, but that gave me the greatest feeling of accomplishment I’ve ever had as a writer. 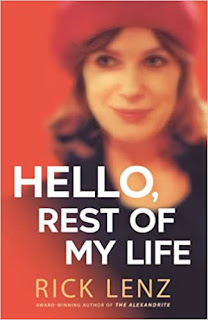 Q: The writer Elizabeth Forsythe Hailey said of the book, "At the heart of this time-travel adventure is a golden age love story that glows with life-tested wisdom." What do you think of that description?

A: I think it’s perfect. I love it. I’m grateful she said that.

A: That truth (love, peace, kindness; everything good) knows sequence, but not time, and that time perception is in no way related to the physical senses, but is a contrivance of humankind.

I’d like the reader to feel it as Danny says, “When I look at Sam now, I know a kid might call her an old lady, but I see everything about her and it is nothing less than perfect.”

A: I’m working on a novel, the protagonist of which is a beautiful and charming full-figured, plus-size, young woman, named Comfort. She lives in a culture of preconceptions about how people are supposed to look.

Six lines of dialogue between Comfort and a therapist:

Therapist: “Do you mind it that you’re fat?”

Comfort: “No, do you mind it that you’re rude?”

Therapist: “Do you think I’m rude?”

Therapist: “You should know that therapy isn’t about good or bad manners.”

Comfort: “What are the rules about kindness?”

A: At the risk of repeating myself, some people wonder why I quit acting to write.

The short answer is that acting roles—other than on stage, spending weeks and months away from home—became less and less gratifying as I moved into character man territory.

Since I’d always been a writer as well (mostly plays), I began experimenting with novels and discovered I liked writing stories that excited me and gave me the satisfaction of guiding my own ship more than playing roles that gave me limited challenge and joy.

I truly haven’t looked back. If someone offered me a meaty film role, I’d certainly give it a lot of thought, but it would take a wonderful project or role to tempt me away from my “second half” passion: writing novels.