Jonathan Santlofer is the author of the new novel The Last Mona Lisa. His other books include The Death Artist. A writer and artist, he is based in New York City.

Q: You write that you initially learned about the theft of the Mona Lisa from a pamphlet on the Louvre. What eventually led you to write this novel?

A: The idea that the Mona Lisa could be stolen right out of the Louvre Museum was astonishing to me. I wanted to know more, everything about it. I started researching the thief, Vincenzo Perrugia, and as I did, I began imagining all sorts of possible motives, which jump-started my novel.

Q: What did you see as the right blend of fiction and nonfiction as you were working on the book?

A: That evolved as I wrote the book. At the beginning I was very interested in uncovering the truth and facts, but then the storyteller part of me took over.

I never had the intention of writing a nonfiction account of what happened. It was much more exciting to see where the facts or the seeds of truth would lead me. There are things in the book that are absolutely true, but in the end it’s the story that matters to me; I always want to write a great story.

Q: The Kirkus Review of the book says, "...Santlofer crafts a layered and absorbing art mystery, complete with exciting action scenes and beautiful descriptions of the city of Florence and its art as well as Paris and Nice. It’s the human story at the heart of it, though, that really elevates the novel." What do you think of that assessment?

A: How can I not love it? It’s everything I was trying do, create and layer a great art mystery, have exciting action scenes and use all of the beautiful scenery and art—and I am always, always interested in the human story. You can’t have a good novel without characters who live and breathe. 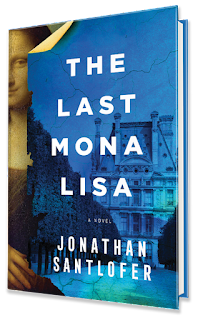 This is also the first time I wrote a love story as well as a mystery (one in the present and one in the past), and it was important to me that they were believable.

Of course I loved writing the descriptions of Florence and Paris, but I never wrote them as travelogue, they had to be part of the story, the routes my characters took, what they saw, smelled, tasted. In the end, I came to think of the locales, particularly the city of Florence, as an important character in the novel.

Q: As an artist and writer, how do the two coexist for you?

A: I draw every day, but those drawings are mostly for myself. At one point in my life, I was a very “serious” artist and had a real art career. Now I’d have to say that I am primarily a writer who draws and paints.

Though I have a side job as a legal art forger (I make copies, replications of famous paintings for art collectors), which also led me to this story. It helped me get inside the mind of the art forger in my novel, to know what he was feeling when he was forging the Mona Lisa!

I do spend a good amount of time making my painted replications, so I guess in the end I’d have to say I divide my time between art and writing and that’s pretty great.

A: Art-wise, I just finished a huge 5x15” mural-like panting of a 1905 American Impressionist for a collector. It was a lot of work and a tremendous commitment, but I enjoyed painting it, learned a lot, and will miss it when it leaves my studio.

As for writing, I am working on a sequel to The Last Mona Lisa. The three main characters are back, but the story is very different. It happened very organically from something I discovered while reading and I’m excited about it.

Again, it’s a blend of fact and fiction, and there’s a story in the past and a story in the present. The backstory takes place in Hollywood in the 1940s so the research for that is really fun!

A: Just that I am waiting and hoping for the world to get back to normal for everyone. In my case, so I can travel again. The new book has a couple of European locales and I need to get there for my research.