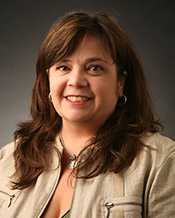 Christin Essin is the author of the new book Working Backstage: A Cultural History and Ethnography of Technical Theater Labor. She also has written the book Stage Designers in Early Twentieth Century America. She is an associate professor of theatre history at Vanderbilt University.

Q: What inspired you to write Working Backstage?

A: During my 20s, I worked as a theatre technician, as a college student and afterwards. I had some fantastic professors at Wake Forest University who helped me see production work as a creative and intellectually rich practice.

Pulling together the various pieces of technology on stage and making them work…I found it so much more satisfying than acting!

When performing, I never quite understood the impact or outcome of my work. But as an electrician, I flipped the switch and lights came on. Or, they didn’t, so I would trouble-shoot the problem and find an answer.

But as satisfying as I had found the work, I had yet to encounter a book that fully expressed the labor of theatre technicians in a clear, evocative language. It is essential but largely invisible industry work that is underrepresented and too often misunderstood.

So, that’s why I wrote Working Backstage: to create a Broadway history that asks its readers to understand theatrical performance from the backstage perspectives of theatre technicians.

A: The lack of archival resources documenting backstage labor is one reason behind the lack of scholarship around technical theatre labor and its workforces.

Unlike performers, for example, who create scrapbooks, write diaries, or hire press agents to promote their careers, technicians have little incentive to save pieces of ephemera that provide evidence of their work.

I found some archived documents at the New York Public Library for the Performing Arts and NYU’s Special Collections specifically connected to the unions that represent technicians and some unpublished materials gathered from the individuals I interviewed.

But I also had to get creative, interpreting production cue sheets as work choreographies or dramatic characters in plays as representative of actual backstage communities.

I also created my own “working archive” through interviews with currently working and retired technicians in New York. The skills they use today are inherited from many generations past, and they talked a lot about their mentors; this helped me create a kind of genealogical history of union stagecraft.

The thing that surprised me most was finding such a warm, opening community of workers eager to be interviewed, not necessarily because they feel they lack recognition but because they genuinely love what they do and wanted to share their Broadway perspectives. 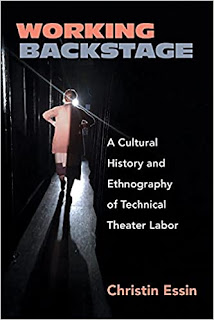 I made my way through more stage doors than I initially anticipated as a result of the kindness of theatre technicians, a group that people mostly imagine as gruff and unapproachable.

Q: How would you describe the role of backstage workers, and has it changed over the decades?

A: The labor movement that secured protections for most American workers in the late 19th century did the same for theatre technicians.

As locals of the International Association of Theatrical Stage Employees, or IATSE, spread from New York and Chicago to other major U.S. cities, the work of stagehands, dressers, and other backstage personnel coalesced into the professional standards shared by technicians today.

In an industry where actors receive the most attention and enjoy the public’s applause, technicians rely on their unions to advance their interests and make sure the industry shows respect by paying a wage commensurate with their skills.

While there will always be boxes to schlep and flats to hang, Broadway’s stages increasingly require specialists trained in new technologies who are open to continued education when even newer technologies arise.

Of course, we’ve yet to see the biggest change. Post-pandemic Broadway will be a different place for its workers. Many left the city or the profession, unable to withstand the financial hit of the one-and-a-half year shutdown, and those who do return will do with changed perspectives and priorities.

No one can predict what’s next, but it will be interesting to watch.

A: First, I hope readers gain insight into the complexity of theatrical production and respect for the passion and skill backstage technicians bring to their work.

But I also hope they gain a respect for the unions that support backstage technicians. The strength and influence of New York’s theatrical unions is a bit of an anomaly in today’s labor economy, and the industry is better for it.

IATSE (International Alliance of Theatrical Stage Employees) connects today’s workers to those of past generations, giving them an occupational history and, quite honestly, a level of respect not experienced by workers in many other industries.

While New York’s technicians were eager to share stories with me, the technicians I queried in so-called right-to-work states were much more hesitant, mostly likely because they lacked the same worker protections and could face retribution talking to someone about their labor conditions.

I work at Vanderbilt University and live in Nashville, another city with a thriving entertainment industry, but local producing organizations were unwilling to connect me to their employees. Ironically, the credentials that got me through so many stage doors on Broadway failed me in my own backyard.

A: I am returning to some interviews I conducted early in my research with scenic and costume shop personnel: carpenters, scenic artists, properties artisans, costume stitchers, drapers, milliners, and other craft workers.

They work in a variety of far-flung locations and might never see the impact of their artistry on the stage; the satisfaction they gain from their work is distinct from those technicians who work in performance venues, and I am particularly interested in documenting shop culture.

I’ve also been visiting some of the immersive Van Gogh exhibits popping up around the U.S. because they’ve put theatre technicians back to work during the pandemic shutdown.

Art critics have made their disdain known for viewing Van Gogh through a spectacle of lighting projections on large-scale screens, but I’m more interested in recognizing and, frankly, celebrating the craft behind creating this type of immersive performance at a time when people are unable to travel and see a Van Gogh in Paris, Amsterdam, or London.

A: Go see a Broadway show! Or a concert. Or an immersive exhibit. Or a painting in a museum. Live cultural events are the life blood of our cities, and I worry that we’ve fallen out of practice being together in civic, public spaces. So many people work in the live performance sector, and their skills make these events possible.