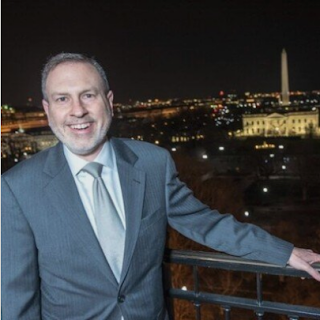 Howard Mortman is the author of the book When Rabbis Bless Congress: The Great American Story of Jewish Prayers on Capitol Hill. He is communications director for C-SPAN, and has worked for MSNBC and National Journal's Hotline.

Q: What inspired you to write When Rabbis Bless Congress?

A: A book about rabbis who pray in Congress is a niche market! The book is very much inspired by my work at C-SPAN. I’m the PR guy for C-SPAN, and I watch a lot of C-SPAN and Congress.

The first thing Congress does is they pray, even before the Pledge of Allegiance. I was very curious about that. The prayer looks like nothing else they do during the day, and I was intrigued by that concept.

I was curious about the diversity of religious representation. On a small number of occasions, a rabbi has been the guest chaplain. Being Jewish, my antenna came up. It’s hardly every day, maybe about seven times a year since World War II.

I was curious about how many rabbis have done this, and what they said. I created a database of every rabbi who prayed in Congress, and what he or she said.

Q: How did you track down the information?

A: You can’t Google “rabbis praying in Congress”; nothing will come up. I used two resources. One was our C-SPAN library, which began in ’79, when the U.S. House started on TV. In 1986, the U.S. Senate went on TV. I was good to the mid-‘80s, but before that there was no video. 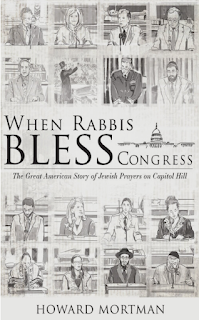 So it involved going through every Congressional Record to the late 19th century, every prayer and if it was given by a rabbi.

Q: The first rabbi to deliver an invocation before Congress was Morris Raphall, in 1860. What were the circumstances under which this occurred?

A: That first rabbi, Rabbi Morris Raphall, was born in Sweden and emigrated to New York. The invocation was in February 1860. James Buchanan was president. There are Morris Raphall scholars, and one description I saw said he was a “celebrity rabbi.” He was a big name in the 1860s.

It was the eve of the Civil War, and in his prayer he talks about brethren dwelling in unity. The Union was about to be torn apart.

What was the reaction? Bewilderment. Some contemporaneous descriptions had members of Congress befuddled. It was a shock to the system. It was on the front page of The New York Times.

Q: Was he the first non-Christian member of the clergy to give a prayer?

A: I think he was. I didn’t find evidence of anybody else.

Q: Of the various rabbis you write about, did any other ones particularly stand out?

A: The prayers that intrigued me most were the ones that were reflective of American history. Rabbis who prayed around the time of the Vietnam War—their language reflected the bravado of the early days of the war, and then in later years, it was, “Let’s bring the boys home.” There were prayers involving the space program, and the struggle for civil rights.

Plus, there were rabbis who incorporated the Hebrew scriptures and made them applicable to Congress.

And there were some whose own stories were interesting—there were Holocaust survivors and famous rabbis like Rabbi Leo Baeck and Rabbi Joachim Prinz. There were many military chaplains.

Q: When did the first woman rabbi pray in Congress?

Sally Priesand was the first woman ordained rabbi in America. It makes sense she’d be the first in Congress. Her prayer in October ’73 coincided with the day the House voted to proceed with the impeachment proceedings against Nixon.

She never mentioned she was the first woman, but the congressperson who supported her was Bella Abzug, who multiple times said, Here’s the first woman rabbi praying before Congress.

A: I’m Jewish and it’s about rabbis, but I don’t want the takeaway to be that this is a Jewish book. I want it to appeal to lovers of congressional history.

The topic of prayer in Congress is an unexplored area. A lot of people are puzzled, and say, “I didn’t know you pray in Congress.” I hope it appeals to people who love new things to learn, about the intersection of politics and religion.

The book is not intended to be against the practice, but it is an excavation of history. If you don’t like mixing religion and politics, which is a legitimate position, I want you to see this history.

A: I want to get across that people should not be scared of the topic. You don’t have to be Jewish. And you can be skeptical of prayers in Congress.

I’ve made great friendships with rabbis who have prayed, with chaplains. I have great respect for people of the cloth. As a lover of history, there’s so much to learn, and please be interested in this topic as well. And it makes a wonderful Chanukah gift!