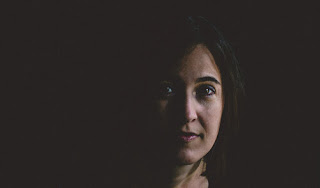 Alexis Orgera is the author of the new book Head Case: My Father, Alzheimer's & Other Brainstorms. Her other books include the poetry collection How Like Foreign Objects. She is the cofounder of Penny Candy Books, a children's book publisher.

Q: What inspired you to write Head Case?

A: Well, I started writing it over a decade ago during the last few years of my father’s Alzheimer’s disease. I’d spend days with him—painting, walking, cooking for him, sitting in silence, whatever—and then I’d come home and write.

I started connecting childhood memories and other things I was reading to the visceral experience of witnessing and caretaking.

I think the initial inspiration was more like desperation, a need to intellectualize the experience, as a survival mechanism. I didn’t know what to do other than write it. Though writing it didn’t feel all that cathartic at the time, it was pretty necessary.

Over the years, I put the manuscript away for long periods, came back to it, rearranged, erased, reimagined. What started as need turned into the puzzle of shaping a narrative from fragments—revision.

Q: The author Sarah Leavitt wrote of the book, "Alzheimer’s disease disorients not only the patient, but everyone in their orbit. It seems like an impossible task to convey, in writing, what this experience is like. And yet Alexis Orgera succeeds — she submerges the reader in a world of linguistic chaos, blending poetry and medical terminology, memoir and philosophy." What do you think of that description? 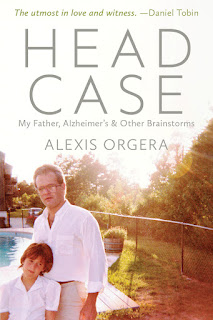 A: Well, I loved Leavitt’s graphic novel Tangles: A Story of Alzheimer’s, My Mother, and Me. I’m a big fan, so I’m first and foremost gutted that she took the time to read Head Case and say such nice things.

I did set out to convey the disorientation of dementia. Writing the first draft in real-time helped. In later drafts, I thought of the book as an arc with a narrative that broke down as it went, starting with the Barry Lopez quote about the narrative spine of an individual's life disappearing.

I think I ended up with more contained units, in the form of chapters, with a bit of controlled mayhem throughout. I think if I did what Sarah Leavitt says I did, I’m happy.

Q: Head Case describes some very difficult times in your life. How did writing the book affect you?

A: Every time I opened the file to write or revise, I would physically wince. Once it was accepted for publication, it became even harder to revisit, and I definitely dragged the editorial process on because of that.

Nevertheless, I still enjoyed the writing and revising, if you can imagine how both trauma and joy can live in one experience.

As you say, the book describes some very difficult times, not the least of which were my own mental health issues and personal dramas amidst Dad’s Alzheimer's. It’s not pleasant to relive any of it, though all of it is important to both remember and stay honest about.

A: The title was initially going to be You Don’t Mind, which is a mistranslation from German of something Auguste D., the first Alzheimer’s patient, said during her time in the asylum.

Somehow over time the title just morphed, and I was thinking a lot about mental health in general, and mine in particular, as well as, of course, my dad’s case. Titles are strange. There are any number that could work. Head Case just kind of stuck.

A: I have three or four books of poetry that I’m continually working on and sending out, and I just started a new hybrid book, which involves drawings, meditations, and short essays on a particular object.

Over the summer I had really hoped to get a good chunk of a novel written, but I might just need to admit that I’m not a novelist. Either that or I need to learn to let go and trust the process.

What I really want to write is a book about plants, inspired by Braiding Sweetgrass, but also very personal, infused with family lore and working at the urban farm near my house during COVID, which was a saving grace in a new city where I didn’t know more than one or two people.

A: Donate to Alzheimer’s research and support for caregivers if you can. It’s not an easy disease and not just about being forgetful—it’s brutal and grueling, particularly for spouses.

And for the children….well, I’m about to turn 44, only eight years younger than my dad was when he was diagnosed. Six years younger than when his symptoms first showed up. This is a scary thought. It would be nice to have a treatment out there that actually helps.