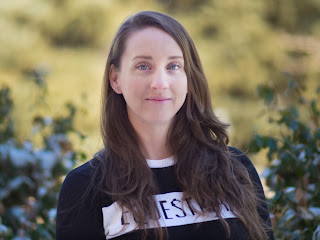 Codi Schneider is the author of the new mystery novel Cold Snap, the first in her Viking Cat series. She lives in Denver, Colorado.

Q: What inspired you to write Cold Snap, and how did you create your character Bijou?

A: I first got the idea for Cold Snap when I read an article about real-life Viking cats. These brave felines sailed the world in longships, working as mousers for their human counterparts.

I also find great amusement in watching my own cat and trying to decipher what's going on in her head. Writing a story with a cat protagonist and from a cat's point of view simply sounded fun.

Once the initial idea had cemented, it only seemed natural for Bijou to really cling to her Viking heritage as her key identity.

Q: The Kirkus Review of the book says, "The four-legged protagonists, including a few additional secondary players from the forest, are smart characters and have articulate conversations, and Bijou, the fearless, ever imaginative leader of the pack, is snarky but lovable and kind." What do you think of that assessment? 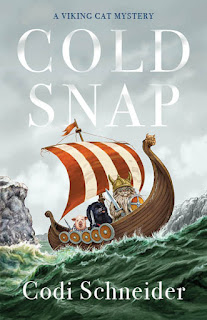 A: I’m very flattered by it. One of the hardest things about writing Cold Snap, and then marketing it, was realizing that I’d written an unusual book for an unusual audience.

Most books with animal protagonists are for kids, not adults, and I was worried the characters could come off as cheesy or unrelatable. Hearing Kirkus describe them as smart, articulate, and lovable made me very happy.

A: During my first draft I had zero sense of how the novel would end. I'm much more of a "plot as I go" writer--though I've tried numerous times to plot ahead.

As I've gained more experience though, I've discovered that a combination of the two methods works well for me. I plot a few Big Ideas ahead of time to give myself some direction, and then I create the rest as I go, tweaking the Big Ideas as needed. The key mystery and ending in Cold Snap was distilled over several drafts.

Q: What was it like to write from the perspective of a cat?

A: In general, I found writing from Bijou’s point of view quite fun, quirky, and even therapeutic. I could suspend my own disbelief and follow her through a wildwood of thoughts and actions that most humans, even fictional ones, wouldn't dare explore.

I did run into challenges though, like going overboard with some of her antics and then realizing I had to reel it back.

I think the key to writing from an animal’s POV isn’t imagining all the ways they’re different from us, but the ways they’re similar. This makes them relatable and reachable—the ultimate goal for any character, human or otherwise.

A: I’m juggling a couple of projects right now. One is the second Viking Cat mystery (there will be horses in this one!), and the other is something completely new and different.

I enjoy working on two projects at once; that way when I inevitably get stuck on one, or need to let an idea marinate for a while, I can jump to the other.

A: Yes, I’m very grateful for my readers and thank you for having me on your blog!