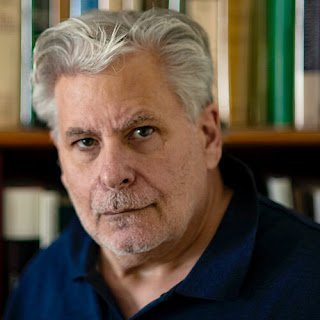 Vince Passaro is the author of the new novel Crazy Sorrow. He also has written the novel Violence, Nudity, Adult Content, and his work has appeared in a variety of publications, including The New York Times Magazine.

Q: What inspired you to write Crazy Sorrow, and how did you create your characters Anna and George?

A: A desire to capture what NYC was like, when I first arrived here and went to college here; the characters slowly emerged from that desire like figures in a fog.

Q: The novel covers several decades of the characters' lives--did you need to do any research to recreate the time periods you describe?

A: No, I’m much too lazy to do extensive research. There are many sections of the book including hundreds of pages since cut from it that demanded some research: I wrote about Three Mile Island for example, in a section later cut. I researched that for an hour. Probably more than that on 9/11.

And I frequently had to look up when one thing happened versus any other thing, when dealing with real historical events: the early ‘80s recession and the NYC Transit Strike, for instance.

But on the whole this book was driven by memory; in its less guarded and careful moments, by nostalgia. Which not only demands no research; it barely tolerates research.

Q: The Kirkus Review of the book says, "Passaro crafts a novel that’s very Manhattan in its particulars, with fine-grained descriptions of the World Trade Center and people lining up to buy the Village Voice to get a jump on apartment listings." How important is setting to you in your writing? 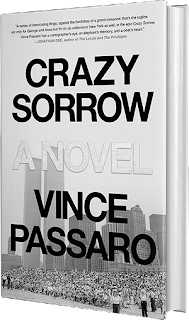 A: There are very few great pieces of fiction —some, but not many —that don’t rely on place as a strong element in their construction and their appeal. Almost everything I’ve written in my adulthood has been set in New York City, so deeply is the place buried in my psyche.

A decade after moving to the suburbs I wrote a story, last year, set in Westchester, where I live. As with the suburbs themselves, the place hardly matters in the piece except to convey a very certain kind of life that’s been chosen by the characters.

With Crazy Sorrow, my aim was more oriented toward place than usual: I wanted New York to be like a character.

A: The end almost ended me. I had no idea. I knew it would go past 9/11 but nothing else. It was very difficult to find a way to land that plane.

A: I’m pulling together my long-neglected barnyard of short stories, dating back 30 years; and struggling to get underway on a new novel, which is kind of a crime novel. We shall see.

A: Ha! You should know less! You’d be better off. Here are my final words on the matter: writing novels is really hard. Much, much more than 10 times harder than a short story one-tenth the length. Yet we do it. Who knows why. Glory? Yes, must be the glory.