Michael S. Green is the author of the new book Lincoln and Native Americans. His other books include Lincoln and the Election of 1860. He is an associate professor of history at the University of Nevada, Las Vegas.

Q: What inspired you to write Lincoln and Native Americans?

A: I once had to give a talk on the trajectory of my research and said that serendipity was important. So it is here. I wound up doing this book because my late mother-in-law attended a talk, and because a group in Las Vegas started a Civil War Roundtable. Really.

First, my mother-in-law had moved to Portland, Oregon, and a retirement community there. She went to a lecture at a local community college on “Lincoln and the West.” It pained me to find out she had done that, because I intend to do that book someday.

It turned out the speaker was Richard Etulain, who is a major figure in the historical literature of the American West, a former University of New Mexico professor who has written scads of books on everything from presidents who shaped the West to literary figures.

We became friends, and Dick became co-editor of a series published by Southern Illinois University Press, “The Concise Lincoln Library.”

One of his co-editors is the acquiring editor at that press, Sylvia Rodrigue, who found out about me through John Y. Simon, the late historian who edited most of the Ulysses Grant papers.

John came to Las Vegas to speak before the group starting the roundtable, and I helped get some support from UNLV and the community. We became friends, and he recommended me to her.

It turned out that one of the people to whom I dedicated this book had published a book with her at another press, and that her husband got his M.A. with my Ph.D. adviser. It’s a small world.

Anyway, Dick and Sylvia originally had me do a book on Lincoln and the election of 1860, and that was a great experience for me. They wanted a volume on Lincoln and Native Americans and, knowing of my interest in the West, asked me to tackle it. And I’m glad they did! 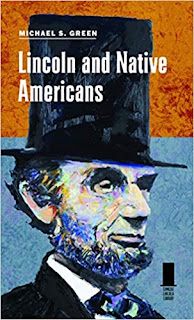 Q: The historian Bradley R. Clampitt said of the book, “In this ambitious but brief and readable volume, Green presents Lincoln as a man of his times who neither hated nor championed Native Americans and as president undeniably prioritized the Civil War over Indian policy.” What do you think of this description?

A: I made great use of Professor Clampitt’s marvelous edited volume, The Civil War and Reconstruction in Indian Territory, and he obviously thought deeply about that subject, and about what I was trying to do. I like and appreciate that description very much.

As his comments suggest, the story is complicated. Lincoln evolved less on Native Americans than he did on African Americans. I said at one point in the book that those who idolize or idealize Lincoln wish he had been better on Indigenous People.

But to dismiss him as just another Indian hater or Indian killer misses a lot. Unlike some others, he did not seek to destroy. Unfortunately, he still did considerable damage.

I had 50,000 words to work with, and that is why it’s called the Concise Lincoln Library. Although I do mention that he had his priorities, I wish I had said more about the fact that Native Americans certainly deserved more attention from him, but they weren’t a core issue in the way that the war and slavery were. He deserves criticism for some things, but he had to prioritize.

I have to mention something I found funny. I did not know that Professor Clampitt had read the manuscript until I saw the book jacket—that’s normally how it is in academe.

Where he teaches, at East Central Oklahoma, he had an undergraduate student named Shae Cox who ended up becoming my first Ph.D. advisee, and she now is an assistant professor at Nicholls State University in Louisiana. When I wrote to thank Brad, I told him that he and I were Shae’s bookends!

Q: How did you research the book, and did you learn anything in the course of your work that especially intrigued or surprised you?

A: I can’t pretend to have done anything radically different, I suppose, in researching the book.

I looked through everything that Lincoln wrote, government documents, accounts by those involved in Indian policy or dealing with Native Americans, and, where I could, what Native Americans themselves had to say. I mined newspapers and, interestingly, genealogical records.

Obviously, I read a lot of related books. David Nichols wrote a fine book, Lincoln and the Indians that guided me in a lot of important ways.

The most fascinating story I encountered was about Nancy Hanks Lincoln. We often hear of what happened to Abraham Lincoln’s father Thomas—he was a little boy when Native Americans attacked his family farm and killed his father, and one of them was carrying off Thomas when his brother shot and killed the Indian.

Thomas was quite a storyteller—there might be something genetic there, perhaps?—and there were some different versions of what happened, though they were close together.

But without giving it away, I will say that Nancy Lincoln’s family had its own story, it fascinated me, and I had never encountered it before.

Q: What impact did Lincoln's earlier years have on his attitudes toward Native Americans?

A: There is an old line that the three most written about people are Jesus, Shakespeare, and Lincoln, and the attraction is partly that we know so little about the specifics of their lives.

That was a bit of a problem here, because we do not have a lot of material on his childhood and adolescence. I tried to avoid using “Lincoln must have,” because that phrase always has bothered me—almost as much as seeing “impact” used as a verb.

But it was clear that he heard stories about family encounters with Indigenous People and what went on in Kentucky and Indiana.

Both Thomas and Nancy Lincoln had reason to be upset about how their families had suffered at the expense of Native Americans (obviously, we do not know what their families may have done in turn).

But neither they nor Thomas’s second wife Sally Bush Johnston Lincoln appears to have been the type to hate others, and Abraham seems to have come out similarly—he certainly could use sharp elbows, especially in politics, but he seems to have felt that he had better things to do with his time than hate others.

Similarly, he served in the Black Hawk War without seeing any combat, but the accounts of his time there suggest that, again, he never voiced hatred toward Native Americans. That was unusual in his time and place.

But he also learned in his 20s a lot about the vagaries of politics, and I think he realized that when issues involving Native Americans came up, as with his approach on other matters, he would not—to use a modern phrase—get out over his skis.

I also am involved in a couple of other book projects that may or may not come to fruition.

I managed to be involved in too many things. The UNLV history department has an excellent public history program, and I work on that, as well as directing Preserve Nevada, the historic preservation organization based in our department.

I also am executive director of the Pacific Coast Branch of the American Historical Association. So I have plenty to amuse me!

A: I wanted to say a word about the dedication of the book. It is “for” two people who died just before the pandemic began: My father, and Gene Moehring, who was a wonderful professor of mine when I was an undergraduate and beginning graduate student at UNLV, a mentor, a co-author, and a great friend.

It is “to” two people very much with us: Andy Fry, who I would describe as I described Gene and still a great friend, and Alden Vaughan. Alden was a history professor at Columbia from whom I took a graduate reading course on colonial race relations in the late 1980s, and it was a wonderful class that greatly influenced me. More than 30 years later, we are still friends.