Amy Argetsinger is the author of the new book There She Was: The Secret History of Miss America. She is an editor for The Washington Post's Style section, and she lives in Washington, D.C.

A: There was so much mystique about Miss America when I was growing up: You’d pick your favorite and try to guess who would win, and those questions of charisma and star power – who has it, how do you quantify it – carried into my career as a journalist observing both politics and pop culture.

In my 20s, I went to see the national pageant in Atlantic City with a friend who had competed in local pageants, and it opened my eyes to this vibrant, exotic subculture that you never saw on TV.

It never occurred to me to write a book about it, though, until 2018, when a battle broke out over the future of the pageant – which was then struggling with finances and the debate over dropping the swimsuit competition.

Learning that so many former Miss Americas were involved in this fight, on both sides, crystallized the narrative for me, offering the framework to explore both the complicated past and present of Miss America as it approached its centennial this year.

Q: Your Washington Post colleague Robin Givhan wrote of the book that “this is ultimately the story of women in this country.” What do you think of that assessment?

A: I’m delighted that she saw it that way, because I do, too. We don’t expect Miss Americas to be relatable. But in fact, they were regular young women before they became famous, and their experiences coming of age informed their Miss America experience.

The Miss Americas of the 1960s were discouraged from pursuing professional careers and felt social pressure to get married right out of college.

The Miss Americas of the 1970s changed the whole identity of the title because they were baby boomers who had learned to speak their mind and pursue high-powered careers; even the conservative ones felt the feminist spirit of the times, and they also struggled with balancing family and careers.

The Miss Americas of the 1980s had to grapple with unhealthy messages in the culture about body image and sexuality.

The 1990s brought the first generation of women to grow up enjoying all the fruits of the feminist movement – they were far more confident and ambitious and advocacy-minded than past winners, but that was the spirit of their generation. 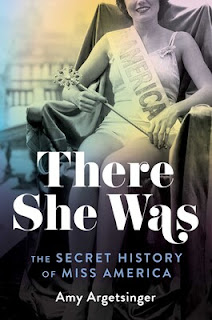 Q: What do you think are some of the most common perceptions and misconceptions about Miss America?

A: The common stereotype is that the contestants are vain and vapid. It’s a competition of self-presentation, so people assume they are fixated on superficialities and playing to some notion of what the judges want.

The reality is that most are fairly normal young women with a lot of self-awareness.

Everyone assumes that pageant women are catty and cutthroat – a stereotype our culture projects onto any field of competition for women.

But I found a surprising sweetness in this world: These women might compete against each other many times on the local levels; they become friends as much as rivals, just as athletes would.

In pageantry, you’d better like other women, because this is a very girl-dominated world. And it’s a niche sport now, so there’s a bond among the women who get into it.

By and large, the women who win Miss America are delightful -- smart, warm, comfortable in their own skin. They’re fun! Each one is a woman who walked into a room full of judges for her interview, and everyone immediately liked her. Their interpersonal skills are next-level.

Q: Of the various Miss Americas you write about in the book, which did you find especially compelling?

A: Many readers sort of know the stories of Phyllis George, Vanessa Williams, and Gretchen Carlson, but my research helped peel back the layers on the complicated role that the Miss America crown played in their later triumphs and disappointments.

I was most compelled, though, by those with lesser-known stories.

Terry Meeuwsen, now a Christian Broadcast Network host, had dabbled in the counterculture in the early 1970s before finding religion, and she transformed Miss America by going after the title in a very business-like way, realizing it could be more than just an honor but a stepping-stone to the career she wanted.

And in the early 1990s, Carolyn Sapp endured a very intrusive and ignorant media culture, which exposed that she was the victim of domestic abuse – something she never wanted made public – and treated that like a scandal. She ended up becoming a very potent advocate on the topic.

A: Catching up on the stack of unread books that accumulated while I was writing my own. And trying to think of another topic worthy of the hard-won skills I honed while learning how to write a book for the first time.

A: This book isn’t just for pageant fans. It’s the story of young women caught up in the fame industry, the story of how feminism elevated the lives of women who didn’t necessarily think of themselves as feminist, and the story of how a pop-culture relic of the 1920s managed to survive for a century.