Marsha Forchuk Skrypuch is the author of the new middle grade historical novel Traitors Among Us. It follows the same characters she's written about in Don't Tell the Nazis and Trapped in Hitler's Web. She lives in Brantford, Ontario.

Q: Why did you decide to return to the story of Krystia and Maria in your new World War II-era novel?

A: From my research, I realized that refugees like Krystia and Maria were far from safe at the end of the war, even though they had been given asylum in an American refugee camp.

Thousands of survivors just like them ended up being kidnapped right out of Allied refugee camps and taken into the Soviet Zone, where they were interrogated and tortured into signing false confessions, and then held in secret compounds called “silence camps.”

Q: How do you think the sisters have each been affected by the horrific events they've lived through?

A: Both of the sisters have a resilience based on trust and a resourcefulness based on generosity. They have lost so much, but in doing so, have an appreciation of what they still have. 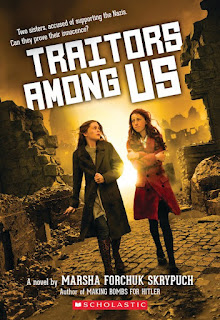 As an example, their mother’s execution has a profound effect on both of them, but while the Nazis could kill their mother, they couldn’t take away the lessons and the love and generosity of spirit that she instilled in both of her daughters.

Q: The novels are based on historical facts--how did you research this particular book?

A: This is the seventh novel I’ve written that deals with the Ukrainian experience in WWII, so I’ve known about the Soviets raiding Allied refugee camps for quite some time.

It’s something pretty much every survivor talks about – they’ve either witnessed it, escaped from it, or knew someone who was kidnapped – so doing the initial research was relatively easy.

Finding detailed first person accounts of people incarcerated in Silence Camps was harder because it was exceedingly rare for people to escape. The toughest was finding an actual successful escape plan. I do consider myself a librarian-detective and so I kept on digging.

A: History as we know it only scratches the surface of all that has happened in the past. There’s so much that we don’t know and what we don’t remember and learn from, we’re bound to repeat.

I would love it if readers talked to their own parents and grandparents and asked about what their life was like when they were young. After that, ask an older person from a different culture or community the same questions. We need to learn from each other so we can all grow in compassion, generosity, and experience.

A: A story set in the 1930s that I’m having trouble containing in a single novel. At this rate it will be three.

A: The companion novels to Traitors Among Us, in order are:

Don’t Tell the Nazis, Trapped in Hitler’s Web, and then Traitors Among Us. That said, the novels don’t have to be read in order. I try to write each story so they’re self-contained, but linked.