Wiley Cash is the author of the new novel When Ghosts Come Home. His other books include The Last Ballad. He teaches at the University of North Carolina-Asheville.

Q: What inspired you to write When Ghosts Come Home?

A: We had just moved to the NC coast back in 2013 when someone told me a story about a large airplane that had crash-landed at a local municipal airport.

According to the story, the aircraft was too large for the runway. The airport had to hire a stunt pilot to fly the aircraft. From there, my imagination just ran with it.

Q: The writer Lauren Wilkinson called the novel "both a gripping murder mystery and a thoughtful exploration of systemic racism in America. The perfect novel for our present moment." What do you think of that description? 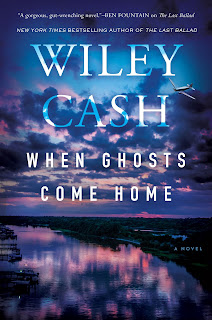 A: First, I was flattered because I think Lauren is a brilliant writer. This novel is concerned with issues of race, class, gender, and the rural/urban divide. Although it's set in the mid-1980s I think those are issues that we still find ourselves confronting in contemporary America.

A: So many of these characters in this novel are haunted by something - bad decisions, racial terror, heartache - and in one way or another these hauntings come to visit them over the course of the book. They can't get away from their ghosts, even in the closing scenes.

Q: The novel takes place over a few days in 1984. Why did you choose that time period?

A: 1984 was a real watershed moment for the United States. So much was going on. The AIDS crisis had become an epidemic. The "war on drugs" was gearing up. We saw rising economic inequality. And racism was fueling so much of our national perceptions around drugs and poverty.

But the reelection of Ronald Reagan served to gloss over so many of our national tensions, and if you weren't paying attention - then or now - you would've believed we were a united country. But under the surface we were trying to keep the chaos at bay.

A: Another novel set on the coast of North Carolina. This one covers a few days in the fall of 2018 after the toppling of the Silent Sam Confederate monument in Chapel Hill.

A: I'd like to share that this is my first real mystery, and it was a joy to write because it kept surprising me. I hope it surprises readers too.