Jane Ward is the author of the new novel In the Aftermath. Her other books include The Mosaic Artist. She lives in Chicago.

Q: What inspired you to write In the Aftermath, and how did you create your characters?

A: The financial collapse of 2008 brought many stories of hardship and uncertainty into the nation’s consciousness. There was an overwhelming sense that we all would have to remake our lives and our businesses during a recovery period, but for a while no one could imagine what that future would look like.

My stories always begin with the kernel of real-life experience as I attempt to see my way through big questions such as, What will the world look like now and going forward?, and micro questions like, What specifically is happening to Character A, B, C, and so on?

This time period gave me the ideal backdrop for answering those questions through a story. And also, enough time had passed that I had some perspective to know how people came through. Or didn’t.

It’s like this with every novel. I create characters and write toward my answer to a question.

In this case, I began to imagine a woman caught in the fallout of the recession, and I wanted to know how, after being betrayed and abandoned by someone who loved her, she could possibly get unstuck from those emotions and move on.

A: That time period was very dark for many people. I wanted to acknowledge that the struggles – the middle age job searches following a layoff or business failure, the anxiety of owning a home that was underwater, the uncertainty of not knowing what would come next – were so much more than the data we were bombarded with daily.

There were real people and real lives behind the unemployment charts, people living in the margins and struggling to find their way back to living in a meaningful way.

But recessions and downturns are also a cyclical problem. Myself, I’ve lived through a few recession periods, and it’s certain there are more to come. I began writing the novel in 2014, six years after the start of The Great Recession, and the memories and the issues were still fresh for me.

The hope is that no matter what time period the story is set in, the story will be universal and relevant. 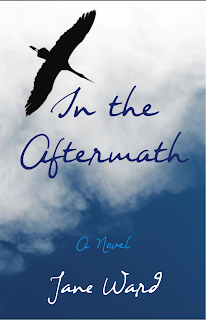 A: I start books with a mental image of a character/characters and an idea of the conflict they will face, but without any concrete plan for how the conflict will be resolved or where the characters will end up. I am a complete pantser writer!

Because of this, I give my first draft a working title and as the story develops, the title changes too. The hope is I’ll end up with a final draft and the right title at the end of the process.

It didn’t really happen this time around. Maybe I’d had too many working titles or maybe I’d spent too much time with the work, but the final title I had chosen was not exciting any of us.

Luckily, my wonderful publisher, Brooke Warner, emailed me to brainstorm some new ideas. When she suggested In the Aftermath, I said, “Of course, that’s it.” It was so obvious. The entire story is what happens in the aftermath of a tragic decision.

A: I aim to tell stories of the connections we make as humans, how relationships go wrong, how they might be righted. We humans have a great capacity for rebirth and redemption and – I think – a deep need for the particular connection that comes when we forgive others or ourselves.

The characters’ journeys may take some dark turns, but I would like readers to finish the book thinking that after grief can come possibility and hope.

A: I am in the first draft stage of my fourth novel, currently titled Mothering. The main character is an older, adoptive mother, a woman who (we learn as the story opens) gave up the biological child she had when she was a young college student.

It’s a part of her life she has kept secret from some of the people closest to her. When the secret is exposed, her family relationships begin to unravel.

Big picture, the story is – as you might guess – about being a mother, but it’s also about the different kinds of care women provide in all parts of our lives and the kinds of care we allow ourselves to receive.

A: Although the characters and situations come from my imagination, there’s one aspect of my own life that consistently appears in my novels, and that is my love of food and cooking.

I’ve worked in catering sales, in a restaurant planning private dinners, as a weekend baker, and most recently as a food writer for local papers in Massachusetts.

Cooking and baking are as much a part of who I am as writing is, but broadly, cooking and feeding others is simply intrinsic to being human. People gather around food, around the table, and it’s there that people are their most vulnerable and receptive and where complex stories can play out.

A few years back, I took a bread baking class with master baker Richard Bertinet, and after class he reminded us that the word “companion” comes from Latin and means “with bread.”

In other words, the people we gather with are the people we choose to share our bread with us. If I’m writing about the intimate connections between people, you can be sure I’ll include something about the food that is being shared.