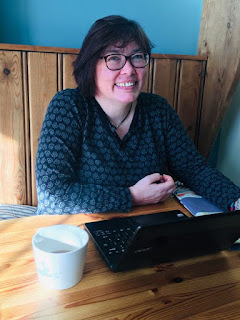 Mandy Robotham is the author of the new novel The Berlin Girl. Her other books include The Secret Messenger. She is based in the UK.

Q: How did you come up with the idea for The Berlin Girl, and for your character Georgie?

A: In researching my first novel, The German Midwife, I became quite fascinated with the gradual lead-up to such a momentous war, especially in how it was being “sold” to the German people. But I felt I needed a character who was coming in afresh and who would have a reason to dig deeper for answers.

Many years ago, I was a fledgling reporter, although very much at a local newspaper level, along with magazines. But I looked up to female war correspondents, and as I started reading about them I fell in love all over again with their gusty spirit. I wanted to be them through Georgie!

Q: What do you think Georgie’s experiences say about women reporters in the World War II era?

A: That they were incredibly brave and daring, but also how difficult it must have been fighting the general prejudice against working women, and elbowing their way to a good story at the same time. 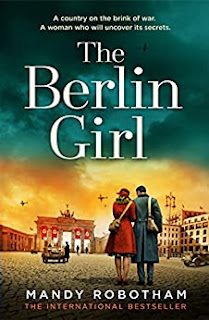 During the war itself, it was recognised that women could take on numerous male roles in the workplace, but of course this hadn’t happened yet in 1938-39, and so female journalists were having to prove themselves daily.

American reporters had a slightly easier time – United Press banned women on US territory, but were more relaxed with postings abroad, and in the conflict itself they could “join up” and be a part of the official press corps. British correspondents, however, were banned from the front line by their own General Montgomery – “Monty” – as he thought them “unlucky”!

All in all, it meant women from either side of the pond needed to be smart, wily, cunning, and fearless. And good writers, of course.

Q: What kind of research did you do to write the novel, and did you learn anything that surprised you?

A: I started with the general historical timeline of the lead-up to World War II, and went on to read a lot of diaries from reporters in Berlin – William L. Shirer from CBS was a brilliant diarist in painting the scene.

I also read the biographies of female reporters – Martha Gellhorn wasn’t in Berlin, though she did report on the war, but her character and lifestyle was key in forming my vision of Georgie.

What surprised me was the Nazis’ audacity even then; we didn’t then know of the atrocities to come, but the Third Reich was unashamed of its prejudice, and in dressing it up as truth quite openly.

“Propaganda” nowadays is a fairly sinister word that we treat with suspicion, but the Nazis had their own Ministry of Propaganda and were proud of it. Looking back with a 21st Century eye opened my eyes to the global changes we’ve made.

A: I’m not a meticulous planner but I always have a beginning, some sort of middle, and an end, so I knew the narrative would end the day that that war broke out, because that felt like a separate chapter to me.

The bits in between arise literally as I open the laptop, and the surprises are in the characters that muscle their way in unexpectedly. In this book, it’s Rod Faber, the fictional New York Times reporter; the more I wrote him, the more I loved him, and I will admit to having a visual image of the brilliant and bearded Bill Bryson as I typed (sorry Mr B!).

I was also surprised at how much I enjoyed creating the epilogue, since it took me back to my newspaper days in writing short and snappy pieces – though I was generally terrible at hard news because my editors always complained I was “too flowery.”

A: I’m sticking with Berlin, because it’s endlessly fascinating to me as a city that’s had to rebuild itself so many times, and yet remains so vibrant.

This time, I’m travelling to a favourite era of mine for a story on the Berlin Wall, set between 1961-63 in The Girl Behind the Wall, due to be published around the 60th anniversary of the Wall being erected.

I had great fun researching the fashions and hairstyles, and well as visiting some of the real buildings and cafes where scenes are set. Again, I was astounded by the cruelty and hardship, but also by the tenacity of people to survive.

A: I’m just so thankful to be in this business now, with everything the world is going through – I’m a voracious reader, and books have been my solace in lockdown, in taking me to world away from my own. I hope mine may do that in some small way to other readers.

And I’m a keen knitter too, of what my kids say are “weird things” – placentas (I’m a former midwife), yellow submarines, Mandrakes, and vegetables, anything that’s not strictly normal in yarn!