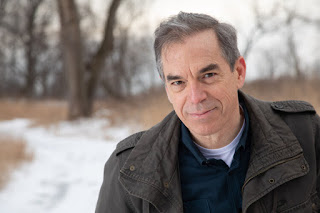 Miles Harvey is the author of the new book The King of Confidence. It focuses on 19th century con man James Jesse Strang. Harvey's other books include The Island of Lost Maps. He teaches at DePaul University in Chicago.

Q: You write that an editor at Little, Brown approached you to write this book focusing on James Jesse Strang. What intrigued you about Strang initially?

A: I’m a Midwesterner, so I loved that the story of James J. Strang took place in my home region, which tends to get a bit overlooked by historians.

I had a blast researching and writing about a self-proclaimed prophet who started a Utopian colony in a little town in Wisconsin (where, by coincidence, a good friend of mine grew up), then moved his flock to an island in northernmost Lake Michigan, where in 1850 he declared himself King of Earth and Heaven.

But in truth, I never really saw Strang as a regional story. Just the opposite, in fact.

What drew me to him was that I envisioned him as a kind of lightning rod lightning rod for all the fierce enthusiasms and vibrant social movements of mid-19th century America—apocalyptic religious sects, utopian social communities, and vibrant reform movements, including abolitionism.

(Unlike other Mormon leaders, Strang was an outspoken abolitionist, who, as a member of the Michigan Legislature, successfully sponsored legislation that aimed at undercutting the Fugitive Slave Act.)

I also saw him as the product of sweeping economic, technological and social changes that gave rise to a suddenly mobile and anonymous America—a place where, as one contemporary chronicler put it, “larceny grew not only respectable, but genteel, and . . . swindling was raised to the dignity of the fine arts.” 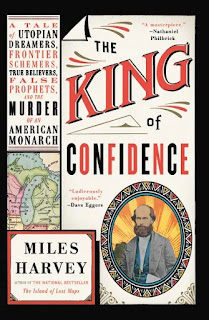 Q: In the New York Times Book Review, Chris Jennings writes, "Despite the frontier setting, there is something eerily contemporary about Harvey’s portrait of a real estate huckster with monarchic ambitions, a creative relationship to debt and a genius for mass media." What do you think of that assessment?

A: I thought the whole review was incredibly perceptive. It’s always nice when a critic likes your book, but to have your work understood—well, that’s even better than being liked.

And Chris Jennings clearly understood what I was trying to do with The King of Confidence, both in terms of my overall intent and my method.

I’ve never met Jennings, but I admire his work. I learned a lot from Paradise Now: The Story of American Utopianism when I was working on my own book. By coincidence, in fact, I had been praising his book to another writer a week or two before his review appeared in The New York Times.

I also agree with Jennings that the story told in The King of Confidence feels “eerily contemporary.” That’s because the mid-19th century and the early 21st century are both eras in which truth is malleable, enabling charismatic scammers to thrive.

The antebellum era gave us P.T. Barnum, the term “confidence man” and James J. Strang. The age of Twitter gave us Donald Trump. I don’t mention Trump in the book, and I make only two oblique references to our own times.

Nonetheless, The King of Confidence would no doubt have been a different book if I hadn’t written it during the 45th president’s short but eventful reign. Trump helped me understand Strang, but the opposite was true, as well.

A: Strang’s followers were great packrats and record-keepers, so there was a wonderful paper trail on the prophet—much of it housed at the Beinecke Rare Book Library at Yale. There are some other good collections, as well, most notably the Clarke Historical Library at Central Michigan University.

But a big advantage I had on previous researchers was access to the extensive 19th century newspaper databases that simply didn’t exist 20 or 30 years ago. They allowed me to make some real breakthroughs while sitting around in my basement in the middle of the night.

James Strang’s career was one big surprise. As an anonymous farm boy in Western New York, he set out to become “a Priest, a Lawyer, a Conqueror and a Legislator.” Then he went out and achieved every one of those goals. Talk about self-actualization. He was also a hypocrite and a fraud—but those contradictions are what made him so much fun to write about.

A: My favorite books make the world seem stranger and more complex and more fascinating. They fire up my need to know more, to ask more questions, and, of course to read more books. So I suppose I hope that readers of The King of Confidence will feel similarly transported.

I also intended the book to be funny, so I wouldn’t mind if they came away amused. And if my book helps readers make sense of our own times, I’m happy about that, too. To me, that’s one of the things that good history writing does—allows us to glimpse the present through what Barbara Tuchman called a “distant mirror.”

A: I’m writing some short fiction, collaborating with the novelist William Lychack on a textbook, and starting work on another nonfiction project.

I’m also excited to be director of a brand-new Publishing Institute at DePaul University in Chicago, where I’m a founding editor of a nonprofit publishing entity called Big Shoulders Books. I’m incredibly proud of the work we do at Big Shoulders—and incredibly inspired by the people we work with. I urge readers to visit www.bigshouldersbooks.com.

Readers interested in the project might want to check out a recent feature in Poets & Writers https://www.pw.org/content/a_chicago_press_for_the_people or visit www.bigshouldersbooks.com . You can also find out more on my own website, www.milesharvey.com.

A: Here’s a bit of fun King of Confidence trivia: My wife, Rengin Altay, is the voice artist on the audiobook. She’s a hugely gifted actress, and although we’ve been married for 25 years, we never got the chance to collaborate on a project before. So it was great to work together on this one. And I absolutely love what she did with the text.