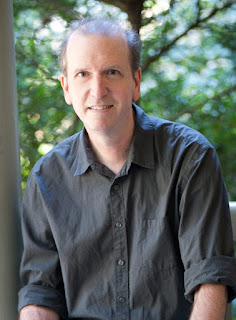 David Wiesner is the author and illustrator of the new children's picture book Robobaby. His many other books include Art and Max. He lives outside Philadelphia.

Q: With your books that include both pictures and text, do you focus on the text or the illustrations first, or do you work on them simultaneously?

A: Drawing is how I write. Most of my books are told wordlessly, so the pictures are the language. The images must be read as carefully as any text.

Even when I use text, as I have done in Robobaby, I draw to develop the story. I will begin writing text – in this case just dialogue – as I am drawing, but the text changes depending how I am visually structuring the story.

I make what is called a book dummy - a simple paper version of the book where I can do rough drawings. The important part of this is that I can turn the pages and read it as I work. I want to see the book and experience the story in the same form that the reader will eventually experience it.

My books grow out of visual ideas and concepts. I have to find the story in those ideas. Mostly those stories end up being told with just pictures, but there are times when text is the best and clearest way to convey what I’m trying to say. The story always dictates the way it needs to be told.

When I use text I still try to say as much as possible through the pictures. A lot happens in the images. There are many funny details to find that tell the reader about the personalities of the characters and about the workings of their world. 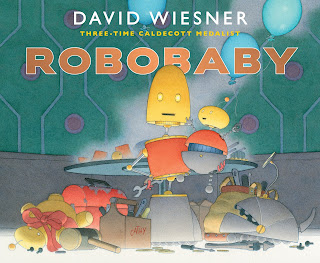 One small example is the baby’s crib. Would a robot baby really need a crib? I thought so. And I thought it would be a hi-tech looking thing. The characters are made of simple geometric shapes and when I thought about what could best hold a very round baby I quickly thought about a Weber outdoor kettle shaped grill.

That became the reference point for the crib – it has a lid that slides open and closed in two halves like a grill. Its base is a springy structure, so it bounces. There is an adjustment lever at the bottom of the base. It has a mobile dangling over it fitted out with gears, nuts, and bolts.

That is one small element of the robot house. When I designed that world I asked myself questions about everything in it. All that detail gives a reader a fully realized world that is sort of like our world, but also very different. It makes for a richer story.

A: Mainly I hope kids will laugh! I hope they will enjoy seeing Cathy deal with the good intentions of her family, friends, and neighbors. Any similarity between the robots and people is purely intentional!

Kids are so visually astute. They see all the details in the pictures. It’s their parents who often don’t. I always find it so odd that when I point things out in the pictures many adults will repeatedly say, “Oh, I didn’t see that!”

There are a lot of fantasy worlds in movies and on TV. Books have the great advantage of holding still. They allow a child to really look and see - the images don’t fly by.

As a kid I loved poring over paintings, illustrations, comics, and other visually detailed art. Those early experiences made me want to create my own fully realized worlds. In my books I try to make stories and places that a child can be fully immersed in.

A: I was one of those kids who was always drawing. I can’t recall a time when that didn’t define who I was. By the time I was five or six, if my parents introduced to someone, it was usually, “This is David – he loves to draw!”

Around the time of high school I began to realize that I really like to tell stories with my pictures. I began to put them together and make sequences. When I got to the Rhode Island School of Design I fully embraced narrative art.

It was during this time that I discovered books without words, books where the pictures alone told the story. These were books by artists such as Lynd Ward, Jean Giraud, and Edward Gorey. I immediately fell in love with the idea of wordless books – and with the realization that the book was the form that I was most drawn to.

I didn’t grow up reading the classic picture books. I read lots of different kinds of illustrated books, but not that many picture books that I can recall. At art school, when I began to think about what kind of art I wanted to pursue, picture books were not really on my list.

But I was fortunate to study with the great David Macaulay. Seeing his books was eye opening. I began to look at then contemporary picture books and was amazed at the scope of the stories and the stylistic range of the art. I began to think that the kinds of weird and strange stories and pictures that I was making might find a home in the world of children’s books.

Fortunately, they did. It never occurred to me to change the way I worked because I was making books for children. I liked weird and strange pictures and stories when I was a kid. I assumed there would be other kids like me out there. And, critically, I found an editor and publisher who agreed.

A: I am at the beginning stages of a new picture book. Only when I finish a book do I seriously start to work on a new idea. I often have a number of things I know I will want to explore, but until I fully concentrate on an idea I don’t know if it will become a story I will want to spend two years working on.

I worked on several ideas before finding the one that made me say, “This is it!”

But I never talk about a book this far ahead – sorry!

A: Robobaby grew out of an app that I created called David Wiesner’s SPOT. It is available only for the iPad. You can find it for 99 cents in the app store using the full name, not just SPOT.

There are half-a-dozen interconnected separate worlds contained within the spot on the back of a bug: an insect world, a cat world, an alien world, the world under a chair in a room, an underwater world, and - you guessed it - a robot world.

SPOT was an idea that I couldn’t get to work in book form. When I first saw a tablet device I saw that the pinch-and-zoom feature would allow me to realize my idea. It was a way to allow the viewer can go deeper and deeper in to these worlds-within-worlds…

But there was only so much I could show in any one world. I thought it would be great to expand on the one of those worlds – the robot world in particular - in book form. And so, Robobaby was born (so to speak).

If you take the jacket off Robobaby you will see the case – that’s what the hard cover under a book jacket is called.

On the case is the packaging for the box that little baby Flange comes in, the box that you see in the pages of the story inside. The image is the logo of Robobaby Inc. with the shipping labels.

So the physical book you are holding is also the box, except this one contains a story.

(Take a close look at the shipping label. Depending on your sense of humor you may find it amusing.)