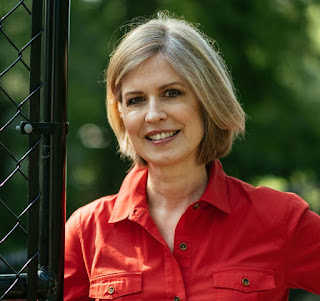 Sandra Neil Wallace is the author of the new children's picture book biography Marjory Saves the Everglades: The Story of Marjory Stoneman Douglas. Her many other books include The Teachers March!. She lives in New Hampshire.

Q: Why did you decide to write a picture book biography of Marjory Stoneman Douglas, and what do you see as her legacy today?

A: As a journalist myself, I really wanted to know how Marjory—who became a reporter for the Miami Herald--used her voice for good to protect the Everglades. What motivated her? How did she do it? I thought young readers would be interested in the “why,” but also HOW she created change amidst so many barriers.

Remember, Marjory’s life spanned two centuries. When she became an adult, women didn’t even have the right to vote yet. This motivated her to become a suffragist, pushing for votes for women in Florida. She also became the first Florida woman to join the US Naval Reserve.

But the most fascinating discoveries about Marjory for me were two things: how she helped convince parks officials to make the Everglades a national park, and how she made bold scientific discoveries.

Taking parks officials on a Goodyear blimp ride over the Everglades, along with conservationist Ernest Coe, was such a brilliant idea, and something I uncovered while researching her life and listening to a recording of her describe it. It had never been written about in any books for kids about her. And it worked.

But when it became clear that people really didn’t know why the Everglades mattered and saw the area as useless swampland, Marjory made inroads in the nascent field of ecology in Florida and shared that knowledge—including how the Everglades region teemed with life fed by a slow-moving river of grass—through a beautiful book called The Everglades: River of Grass. 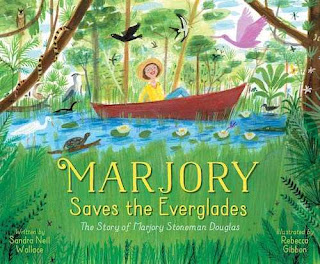 She made connections between water, wetlands, wildlife, and humanity that had never been known by the general public before.

In terms of Marjory’s legacy, when you realize what Marjory accomplished as a nature writer, journalist, citizen ecologist, and environmental activist—it’s astounding. But outside of Florida, people may be familiar with her name but have no idea who she is.

Yet Marjory’s legacy is all around us; not only with Everglades National Park, but every time a child looks at a manatee or leatherback sea turtle and knows that boat motors or fishing nets can harm them, and they begin to think differently. They begin to think beyond themselves.

And every time a child joins Young Friends of the Everglades—the organization Marjory started—and takes the pledge to protect the planet, it’s because of Marjory Stoneman Douglas.

Q: What do you think Rebecca Gibbon's illustrations add to the book?

A: Rebecca’s illustrations imbibe Marjory’s energy and strength while at the same time, illuminate the flora and fauna of the Everglades--some spreads have more than 60 different species rendered in watercolor.

It was remarkable collaborating on this book with Rebecca. You know, typically, nonfiction authors and illustrators don’t communicate with each other while a book is in progress, but I broke down that barrier with my first picture book biography.

For Marjory Saves the Everglades, I reached out to Rebecca because I wanted her to know that I had lots of visual research material that she could have access to.

Marjory lived to be age 108--and with me acquiring so many images of her through her life stages, I knew these artifacts and photos of her, the house she lived in in Coconut Grove, the blimp ride photos from nearly 100 years ago--could only amplify Rebecca’s illustrations and heighten her creative process.

I also wanted Rebecca to feel free to ask me questions that might deepen her knowledge or clarify any little thing needed for visual accuracy. Through these conversations, we also became instant friends. (We even snack on the same things while working—barbeque chips, rice cakes, and granola bars.)

A: I read everything Marjory had written and all articles and books about her, as well as listening to taped recordings. I was grateful that Marjory had penned a memoir, which gave me the opportunity to have her voice infused alongside the narrative through quotes.

She also wrote many stories about the Everglades and was interviewed several times about her activism—especially during the 1960s and ‘70s when she prevented an airport from being built in the middle of the Everglades.

Even so, I had to really search for quotidian details about Marjory that would highlight her personality and how she lived. (In a curious cottage with walls painted flamingo pink.) Did she have pets? Yes! Several stray cats, who inspired her to study the Florida panther.

And because Marjory lived a long life, I wanted to know what it was like to be an activist at 105 years old. It really proved so true that she wanted her own life in her own way and that she made it so. Marjory was also the most persistent person I have written about, so far.

Q: What do you hope kids take away from her story?

A: How one person really can make a difference and that to have an impact on making the world a better place, you need to believe in yourself and be with people who want to create positive change in the world, too.

A: Right now, I’m working on two picture book biographies about women who broke barriers and made bold discoveries in science, but kids have never heard of them--which is exactly why their stories and their voices need to be known.

So many women are hidden figures in STEM, and I can’t wait to share their stories. I’ve finished the research—meaning interviews and scouring all primary sources. Now I’m writing the narrative.

A: I really believe in taking the activism I write about off the page and into the community. Marjory inspired me to use my voice for good not only to write about hidden changemakers young readers need to know about, but by creating change in the community I live in.

That’s why I co-founded the DailyGoodNH.org with my husband and frequent writing collaborator, Rich Wallace. Focusing on inclusion, food security, literacy, and health and wellness, we created Global Foods Pantries at New Hampshire college campuses and will roll-out a summer Feed and Read Aloud program with the City of Keene.

All our closets at home are now foods pantries and it makes our Mondays—the day we focus on The Daily Good—the best day of the week.