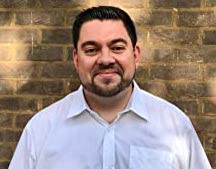 Ryan Mizzen is the author of the new children's picture book Hedgey-A and the Honey Bees, the first in his Time to Care series. He is based in the UK.

Q: How did you come up with the idea for Hedgey-A and the Honey Bees?

A: I’ve been planning the Time to Care series of children’s books for some time and knew one of them would be about bees.

Then one summer night, I heard some rustling in the garden and it turned out that a hedgehog had moved in and made itself a home! That hedgehog would become Hedgey-A.

We also have a flowering tree nearby which attracts a variety of bees, and the two elements came together in this book.

Q: What do you hope kids take away from the book when it comes to the importance of bees--and the environment in general?

A: Bees are essential for our survival. It’s been estimated that three quarters of crops are pollinated by bees and other insects. 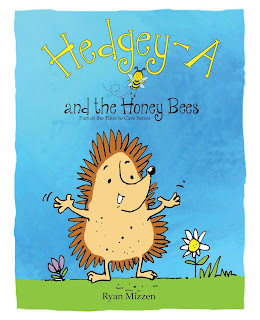 A quote attributed to Albert Einstein explains the issue succinctly: "If the bee disappears off the surface of the globe, then man would only have four years of life left." Bees perform an underrated, yet fundamentally critical role and I hope to inspire more learning around this.

The primary issue in this book is around the widespread use of unnecessary pesticides, include neonicotinoids, which have been linked to bee deaths. This is partly due to the fact that the pesticide industry have a strong lobby group, influencing government decisions.

Even the United Nations (UN) has been highly critical of the pesticide companies, stating that they’ve “obstructed reforms and paralysed global pesticide restrictions”. In the same report, the UN went on to say that it’s a myth that we need pesticides to grow food crops.

But these toxic chemicals don’t just harm bees. Traces of pesticides have been found in global honey samples, and it raises the serious question of what long-term harm are we doing to ourselves from exposure to toxic pesticides and insecticides? Alzheimer’s, Parkinson’s disease, and cancer are just some of the effects linked to excessive exposure.

While this in-depth exploration of pesticides may go far beyond bedtime reading, it’s my hope that this story will encourage children to think about the way we interact with the natural world.

Q: What do you think Paul Winward's illustrations add to the book?

A: Paul is a phenomenally talented illustrator and he brought this story alive in a way I could never have dreamed of. He has an exceptional way of capturing a sense of place, but also in creating fun and lovable characters.

When he sent me his initial designs for the character of Hedgey-A, I was stumped picking out my favourite as they were all incredible! He has many picture books to his name and is an absolute pleasure to work with, and I’m delighted to be working with Paul on this series.

Q: How did you first become interested in creating children's picture books?

A: After completing my bachelor’s degree in Climate Change, I realised that one of the biggest challenges in bringing about action on climate and environmental issues was communicating them in an easy to understand way. So I studied an MA in Creative Writing and my goal is to reach as wide an audience as possible.

Writing children’s picture books is great because they can communicate an important message to both younger and older audiences simultaneously. When parents read books to children, they often talk about the stories and what makes them special. Young readers are also more interested in these topics, thanks to Greta Thunberg and the global Fridays for Future movement.

A: I’m currently working on the second book in the Time to Care series, which I hope will be released next year. It’s set in the Arctic and will be exploring climate change with a polar bear. I’m also researching a book for release post-pandemic with my business co-founder, about the importance of social reconnection.

A: Thank you so much for this lovely interview. I’d like to end with a positive message. Even though we’re facing a plethora of interlinked ecological crises, we’ve seen from Greta and the Fridays for Future movement, that children and adults can bring about change when they work together.

It’s my hope that this book can play a small role in communicating that need for action, along with a sense of hope that change is possible.

Hedgey-A and the Honey Bees is available now on Amazon. More information is available at ryanmizzen.com. Paul Winward can be contacted through his website.