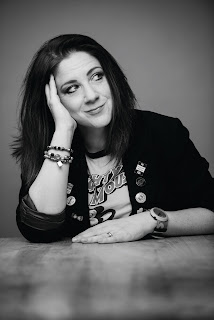 Rebecca Elliott is the author of the new young adult novel Pretty Funny for a Girl. Her many other books include the Owl Diaries series. She's based in Suffolk, UK.

Hi. Thanks so much for having me on your blog!

Q: You’re very welcome! To begin, what role did you see comedy and humor playing in your new novel?

A: I think humour is the best vehicle to allow us to explore emotive issues. It allows us to see the humanity in situations, and most importantly it makes the book (I hope) enjoyable!

“When you find the funny in this serious world that is so often full of pain and cruelty it’s like discovering a diamond in a pile of crap. It’s precious.”

So says my lead character Haylah. She’s a wannabe stand-up comedian and like me, she’s had a life-long obsession with comedy and sees laughter and humour as one of the most important of human endeavours, connections, and emotions.

Laughter and jokes aren’t the frivolous froth surrounding the more “serious” lives we lead—to me they are what make us human, what unite us and make us able to carry on even when things are a little dark. The bonds that are formed through laughing with our friends and family are arguably just as strong as those created through “serious” conversations and experiences. 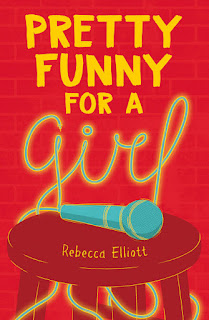 Stand-up comedy specifically seemed like a good analogous way to explore the teenage dilemma of wanting to be listened to, to be accepted, to be centre stage and express yourself fully and yet deal with the fear of standing out from the crowd, of being judged, and feeling utterly alone.

A: Unfortunately one of my strengths, not just in writing but in life generally, is definitely not in forward planning! So unfortunately I’m not one of those authors who meticulously plans out every chapter and instead I employ more of a “just wing it” technique.

I planned the rough plot and the first few chapters and I did have a fairly clear idea of how the story would end, but then I just got into the writing and let the characters drive where their stories went and what scenic route they took to that ending.

Q: The Publishers Weekly review of the book says, "Her comedy routine, though at times self-deprecating, also flips some stereotypes, and by book’s end Haylah has begun taking charge of her present and her future." What do you think of that description?

A: I love it! This is so what I wanted Haylah’s (to use that awful and overused word) “journey” to be. That through her experiences she at least starts to see what it’s like to love herself and trust her own opinion of herself rather than letting others’ opinions shape her personality.

It should be pointed out though that Haylah doesn’t start out as your classic ashamed-of-herself, shy, larger teenage girl; she does have a certain amount of belief in herself, but it’s easily knocked. I guess like a lot of teenagers (or, just people, really) she’s a contradiction of bubbling confidence and crushing feelings of “Oh my God I’m such an idiot and everyone knows it.”

Her comedy routine at the end is a sort of culmination of the self-confidence and self-acceptance that’s finally overriding her self-deprecation and self-doubt.

Haylah’s not completely “there” yet at the end of the novel (but then who can ever claim to have completely mastered the self-acceptance thing, especially as a teenager), but she’s at least starting to believe her own abilities and positives. And as Sophia Bush so brilliantly put it, “We are allowed to be both a masterpiece and a work in progress simultaneously.”

A: These days more than ever, teenagers, particularly teenage girls, are constantly bombarded by the ridiculous Instagrammy pressures to look and act in a certain way.

And often in the literature aimed at them I find that my favourite kind of teenage girl is under-represented—the kind of girl who’s actually more interested in being herself, regardless of how she looks and how she’s projected into society: loud, proud, opinionated, unique, and frickin’ funny.

So I hope the book will resonate with readers who can perhaps see themselves a little in Haylah.

I also just hope people will fall in love with the characters (especially Haylah’s younger brother Noah who’s based on my own son!) and enjoy, experience, and giggle along with their ups and downs.

And ultimately I just hope it's a laugh-out-loud, uplifting tale about the importance of self-love over the opinions of others and the joy of wobbling your funny bits in the face of life.