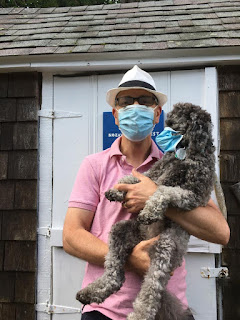 Maxim D. Shrayer is the author of the new poetry collection Of Politics and Pandemics: Songs of a Russian Immigrant. His many other books include A Russian Immigrant: Three Novellas. Shrayer grew up in Moscow and emigrated to the United States in 1987. He is a professor of Russian, English, and Jewish Studies at Boston College.

Q: What inspired you to write these poems?

A: Thank you, Deborah, for your thoughtful questions.

These poems originated in late November 2019 as an outpouring of political despair following the failed presidential impeachment and during the early election campaign. I abhorred the president and what he had done to this country. And yet I had trouble getting excited by the message of some of the Democratic candidates or by the lackluster performance of the others.

To quote from the prologue, in which the reader gets to know the lyrical hero (“A Russian Immigrant”):

We used to live on Beacon Street in Brookline,

the year of the election was under way,

caricatures of virtue and dismay,

and yet I chose the ones I could contend with

as long as they succeeded, come what may,

in beating the Trump and rescuing our tender

democracy from a looming right-wing threat.

I knew our freedom needed a defender […]

These were, one might say, poems in the Romantic sense of the word, and yet they initially took the form and shape of political satire. Since coming to America in 1987 as a political refugee from the former USSR, I had voted Democratic and shared much of the party’s traditional liberal values.

And yet—as an immigrant, a Jew, a survivor of the Soviet totalitarian regime, and a humanist—I had more and more trouble with the radical, increasingly left-wing tilt among the Democrats. Hence the growing sense of angst, which had initially found a spontaneous expression in verse.

With COVID-19 overwhelming us, by the end of March of 2020 I was mainly writing about the impact of the pandemics on everyday life. My poems became less satirical and more lyrical and confessional. What most certainly helped was being married to Karen E. Lasser, a doctor who worked with COVID patients, and also being the son of David Shrayer-Petrov, a poet-doctor.

Q: Did you know from the beginning that you'd be writing a collection?

A: A resounding no. When these poems first started coming to me, I didn’t think of them as a future collection or a book project. They were, above all, my way of surviving first the election campaign and later the pandemic, and also a way of sharing with the world my sense that poetry can offer a modicum of hope and, perhaps, even a small dose of relief.

By the start of the summer of 2020 I had found myself with a manuscript of over 40 new poems about the impact of divisive election politics and the unrelenting virus. I ended up selecting 36 for inclusion in Of Politics and Pandemics: Songs of a Russian Immigrant.

I then reached out to several American poetry publishers I admire, and one of them quickly accepted the book for publication, which was very rewarding to me. However, it turned out that because of the backlog my book wasn’t going to come out until the end of 2021, whereas I felt strongly that the material was timely, and I wanted the book to come out by the end of the year 2020.

Luckily, M.Graphics Publishers, a Boston-based publisher, read the manuscript, became enthusiastic, and committed to publishing the book before Election Day. And they did!

Q: Looking back at the past year, do any of the poems particularly stand out for you? 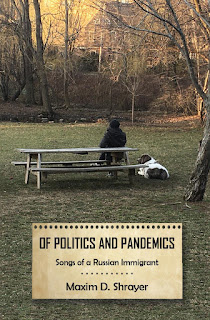 A: A very interesting question. It really gave me pause—and a chance to look back and think of the individual poems in conjunction with specific experiences and (mis)adventures of the past 11 months.

Four poems stand out in this particular moment in time. The first—and this is also in connection with the president’s refusal to acknowledge his defeat—is titled “The Senate Trial,” and in it A Russian Immigrant wonders, as many Americans do today:

In our history’s own court

will he remain the tweeting sort,

the brazen face of politics?

The second is “On Running into a Former Neighbor at the Charlottesville Airport,” in which my lyrical hero feels a surge of pity for a certain garden variety of the American xenophobe:

You stare your former neighbor in the temple,

you’d shoot him, if you could, but where’s your gun?

Your world is gone, shopkeeperess, your temple

of Trumpian hopes has come undone.

The third is “Evacuation,” in which A Russian Immigrant takes his family to their Cape Cod dacha to shelter in place, hoping for a respite from urban stress, and runs into some local folks who want to close the bridges and keep the outsiders (including washashores) from coming to the Cape:

Our Immigrant wanted to transplant

his family to Cape Cod,

will do them little good.

He sleeps all day, he guards all night

his family and homestead,

his rifle is loaded all right

his rifle is loaded but his heart,

his heart is filled with dread.

The fourth one, a sonnet, takes me back to September 1970, when my father was dispatched to Yalta to fight the outbreak of a cholera epidemic (part of the El Tor pandemic). I was 3, and I parted with my father as if he was going off to war—which he was, in a sense.

For some reason I keep thinking of today’s young children whose parents must work not from home but out there in the trenches, and how the children see their parents off and look at them with love and fear:

I don’t remember the epidemic, just the panic:

of fear. Seething lines at the ticket office,

or “dehydration” hanging in the breeze.

The hasty packing. My collection of stag beetles

forgotten on the windowsill. Our train

My parents kissing on the platform. Reunion.

I didn’t know another parting was near:

my father, a doctor, would be dispatched to Crimea.

Q: What do you see looking ahead when it comes to politics and the pandemic?

A: I see a glimmer of hope, and also some new lyrical satires. Since the election, I’ve written one so far, in which the elderly father of A Russian Immigrant calls his son to say that “now democracy will survive.” Perhaps it was worth immigrating just to experience that particular moment in history…

Q: Why did you decide to write in the voice of "A Russian Immigrant" throughout the poems?

A: The most direct answer is that I’m a Jewish-Russian immigrant. My previous fiction, including Yom Kippur in Amsterdam, has dealt mainly with the lives of Russian expatriates.

Above all else, Of Politics and Pandemics stems from my most recent work of fiction, A Russian Immigrant: Three Novellas, which was published last year (and which you and I discussed in a previous conversation). In composing these poems I needed an alter ego capable of fluidly transitioning from the satirical to the lyrical mode.

I also felt—perhaps experienced says it better—a need for ironic distancing so as to speak with confessional vulnerability about the most pressing questions that were on my mind. Why is our country going through such a terrible patch of history? Is the world on the brink of an epidemiological catastrophe? And other unanswerable questions.

At times I wonder myself: Who is this laughter-through-the-tears persona, “A Russian Immigrant?” He is not quite me. Here’s an excerpt from a light-hearted note “About the author,” which describes my relationship with my alter ego:

His hero, A Russian Immigrant,

has lately moved to the forefront

in Brookline, Mass. with wife and kids

and has a house on Cape Cod;

unlike his master, he does not

with Jewish humor in his veins,

Russian soul-searching in his rimes,

I don’t want to be coy and pretend that “A Russian Immigrant” and I don’t share a great deal. Central to the new book, especially its second half, is a reflection on that remarkably intensive experience of family love that my wife, daughters, and I lived—are still living—in isolation, and in two languages.

A: I just had two books published, Of Politics and Pandemics (here in America), and a Russian-language book, Antisemitism and the Decline of Russian Village Prose (in St. Petersburg, eventually to come out in English), so I’m still in a state of authorial postpartum.

This week I’m reviewing two sets of proofs. The first is a lovely book edition of the revised text of my father’s very timely play, Vaccine, which I helped him prepared for publication in Moscow. The second is the proof of Fuga dalla Russia, Rita Filanti’s beautiful Italian translation of my memoir Leaving Russia: A Jewish Story, which is coming out in Pisa. Something to prop up the leaning tower with…

A: Well, perhaps to point out that my new book is American poetry, but in a sense it’s also Russian poetry living and breathing in English.

The question of language choice is also, I suppose, of some interest. Prior to the creation of this book, I had written and published some English-language poetry and self-translations, but most of my experience as a practitioner of English-language verse has been in the realm of literary translation from Russian. My own poetry had been mainly in Russian while my fiction and non-fiction—mainly in English.

Of course the life I described and modeled in the new book was lived in English, and so it felt more natural for me to write about it in English-language verse. So one could say that politics and pandemics pushed me to write poetry in English.

And while I’m grateful to both Calliope and Erato, I would never speak of the artistic beneficence of bad politics and deadly viruses. I would honestly give up all my silly rimes if this could somehow fend off or deter the monsters of totalitarianism and the dukes of death.