Judith Stiehm is the author of the book A Pilgrimage through the Churches of a Small American Town: The Churches of Carlisle, Pennsylvania. She is Professor of Political Science at Florida International University.

Q: Why did you decide to write this book about the churches of Carlisle, Pennsylvania?

A: I was in Carlisle, Pennsylvania, doing research. It is a very small town, population 18,000, and I was there for a year. I didn’t know anybody. I did everything there was to do in the town.

It isn’t a very ordinary town of 18,000. It has a college, a law school, a prison, a medical center, and the Army War College, where I was working. It’s very small, but very sophisticated.

The weekends came. One thing I could do was go to church. I had attended church regularly growing up. I went to churches and wrote essays about them, and friends suggested I put them together in a book. 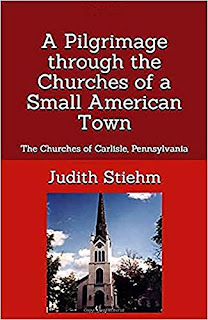 A: I really knew a lot about churches. I knew what I was seeing, and what I was missing. There was an amazing church where people were testifying—they had a direct line to God.

I knew what I was seeing, but I didn’t know about the churches’ history. The Salvation Army, which doesn’t really call itself a church, has officers; men and women married to each other had to have the same rank.

It was a small town with four Methodist churches! At some time they had a splitting off. The Catholics had one big church. But the Methodists were not the only one with duplicates.

Q: What did you learn from writing the book?

A: I learned a lot about the history, and how the churches developed and changed over time.

There were originally Quakers way back in England. They used to stand up and talk and talk. By the late [20th century] you would sit in a square so everybody’s equal. Nobody speaks, you just sit there. Nobody is dressed up. They meet together, and after a long silence someone will make a comment and then sit down. Sometimes no one will say anything, and then someone will say thanks for coming, and they’ll have refreshments.

Also, the churches are all so different inside. The Congregational Church, which I was raised in, was very plain, nothing ornamental. Some of the others were very elaborate. The Catholics had different shrines available for people to pray.

Q: What about non-Christian places of worship?

A: I went to a synagogue. The service was run by women. There was no rabbi.

The Army War College had a chapel used for different churches at different times of the day; they wanted it to be ecumenical.

A: A completely different project—a biography of Janet Reno, who was the attorney general of the United States. Janet was from Miami, and I was living and working there, and I knew her. There was a set of political women who would play volleyball together. I was in the group, and so was Janet.

When she came back from Washington, I took her to lunch, and said you’ve had such an interesting life, you should write a biography. And she did—she gathered a whole shed of large boxes of documents and she started to write it. And then her Parkinson’s got worse and she died.

One of her friends said, you’re going to have to finish the job. I went through hundreds of boxes of files. I have written the biography, and it’s being reviewed right now by the University of Florida Press.

Her family [growing up] was quite weird—they lived off the grid where there were no paved roads. They all lived in a two-room house, and then they built two bedrooms, one for the parents and one for the kids. The front of the house was open—it was like living in a shed. They went walking around in the Everglades. They were homeschooled for a while.

Q: Anything else we should know about the churches book?