Nathaniel Popkin is the author of the new book To Reach the Spring: From Complicity to Consciousness in the Age of Eco-Crisis. His other books include The Year of the Return. He co-founded the web magazine Hidden City Daily.

Q: You begin your new book by describing some statements made by Republican officials about Covid. Why did you start there?

A: I start there because we are paralyzed. We can’t really even talk about the ecological crisis and our complicity in it. What I mean by complicity is this: our actions—our way of life, our choices—are causing extreme harm to present-day and future humans and other living beings. And though we know quite precisely what we’re doing and the consequences, we choose not to, or feel we can’t, stop.

The Belgian prime minister Alexander de Croo said recently, in discussing the spike in Covid cases in Europe: “We [are] dangerous to each other. We have to have the courage to admit it.” What de Croo says about Covid applies to our paralysis in the face of eco-crisis. The paralysis comes in part from lack of courage. We can’t face the ways we are dangerous to each other. Because we can’t face them we aren’t able to act.

I took it as my mission with this book to help end the paralysis by expanding ways of thinking about the situation we find ourselves in as a society and as a species. Throughout the book I seek new ways to illuminate the practical and moral dimensions of the crisis; the Covid pandemic, which is distinctly related to it, offers some rather penetrating light.

I open the preface, written probably in April, by summarizing the stance of most Republican elected officials at the time, which was to condemn necessary stay-at-home orders and the closing of business as destructive to the economy.

In their framing (notably not based on reality, which acknowledges a healthy economy depends on suppressing the spread of the deadly disease), Americans had a choice: public health or jobs. People’s lives or profit. This is the way they framed it.

Most Americans condemned this notion—and this is why I open the book with it. We condemn it as inhumane, sadistic, even evil. Yet the very same paradigm underlies the global capitalist economy that most of us participate in, as consumers, investors, workers, etc. That system has always traded the lives of the vulnerable for profit. 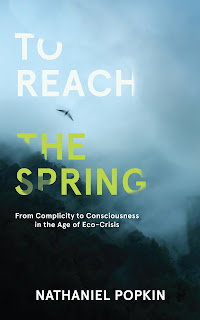 By asking why we—two to three billion humans who benefit most from global capitalism—are OK with this tradeoff in the one instance but not the next, I’m hoping to draw the reader into a new framework for contemplation.

And then, borrowing a question posed to me by a friend, artist and eco-scholar Xandra van der Eijk, I pose a follow-up, why is it we’re willing to listen to and abide the decrees of scientists in regard to Covid but not in regard to the warming climate. Those scientists say we have less than a decade to act before it is too late.

I start there, too, because in a real way the Covid pandemic is a dry run for eco-crisis (and it’s the only thing, aside from politics, anyone is thinking about right now). Indeed, scientists note that pandemics will become more frequent on a warming planet, where humans push further into non-human ecosystems.

An effective response to Covid requires political leadership, cooperation, and personal responsibility, all these elements in dynamic interaction. This is just the same with the emergency of a planet under extreme ecological stress.

In my book I pay closest attention to the last of these elements, personal responsibility, not because it’s up to any one of us to “save the planet,” but rather I find that as individuals participating in a collective act of destruction, we find ourselves in perilous moral territory.

Q: The Publishers Weekly review of the book says, "Admitting that concrete solutions to the climate crisis are beyond his purview, he concludes by urging others who are concerned about the environment to channel their concerns into action." What do you see as some of the most important actions people can take?

A: I’ll begin by reenforcing what PW said: this book is much more about how to think (or think about thinking) rather than about how to act, or what, exactly, to do. One of the reasons for our paralysis is that the climate emergency and the related eco-crisis are both overwhelming and distant, vast in time and space and complex. And what I do in response depends for its success on what you do.

All that throat clearing aside, I can try to answer your question directly.

Far and away the most important is political: organize and demand of your national elected officials that they write new laws to regulate carbon and methane and invest in sustainable energy; reverse the more than one hundred environmental rollbacks of the Trump administration; and support the Green New Deal, or some alternative version of a massive U.S. government-led intervention connected to global initiatives.

Read, think, and develop awareness of the ways we as individuals relate to the non-human world, and in doing so question basic assumptions about the organization of our society.

In addition, as I spell out in the book, I advise four modes of action: to grieve for what is already lost and what will be lost (plants, animals, landscapes, ways of life); embrace the fact of environmental and ecosystem change—there never was an Eden and never will be.

The point of these first two modes of action is to condition ourselves to face the truth of what’s happening and be present emotionally and psychologically for loss as well as change.

The third relates to what many people think about when this question is posed: what should I do? Should I go vegan? Drive less? Stop flying? Buy reusable straws? Many writers and thinkers automatically dismiss these changes to personal habits as mere greenwashing or compensation for guilt.

It’s true that what one person does really doesn’t matter much. But the political is personal and vice versa. If you are compelled to act in this way, by all means do so—there have to be ways for us to square our behavior with our beliefs—it’s a matter of ethics.

And fourth, use your body to get closer to the non-human and to make space for wild creatures. Find ways to break down the deeply ingrained ethos that “nature” is separate from, and subordinate to, human beings.

Q: What do you see as some of the most common perceptions and misperceptions about climate change?

A: We often talk about this as "climate crisis," which ghettoizes the situation a little bit. "Oh, it's climate." Meaning what a lot of people think of is weather.

But it's really a whole set of interlinked crises of ecosystems, and balances of life, throughout the entire globe that are interconnected and interrelated: desertification, extinction, ocean acidification, mass deforestation, proliferation of dams (often under the pretext of “ sustainable energy”).

We see that with the fires, we see that with floods, how each thing is interrelated with each other: for example, high heat leads to forest fire, which leads to the release of stored carbon (perhaps at even greater rates than it’s produced by burning fossil fuels), which leads to warmer temperatures, more fire and the consequent loss of more beings, and therefore greater rates of species extinction.

When there's mass extinction, you see that all beings are related, and one extinction leads to another. So this is a whole earth situation we're talking about, and it also involves the evisceration of human cultures, and human ways of life. As it has, since the dawn of colonialism.

All together what we’re talking about is a radical realignment of Earth life and, at the same time, the making of some places uninhabitable for humans.

Now this brings us to the most common perception and misperception, both. The role of human beings—and what that implies about moral responsibility and agency.

Only in the U.S. is there any misperception about the human cause of global warming, a seed of doubt perpetrated singularly by the Republican Party. The most common perception is the opposite, despite what “climate deniers” say: humans are the cause.

But this correct perception leads many theorists and scientists to somewhat over-ascribe, I believe, in calling this new epoch in the history of the planet the Anthropocene.

With man-made materials now evident in the earth’s crust and its atmosphere—micro-plastics, for example, literally in the air we breathe and water we drink—it may be justified to label our age the Anthropocene. I applaud this perception to the extent it makes people think about their impact on the planet and, perhaps, take responsibility for it.

But as a misperception I worry it gives humans claim over the planet they don’t deserve or warrant, with some 9 million other species. Overprescribing human influence and responsibility could lead to further subjugation of other beings and further separation—this is the danger I fear of the Anthropocene.

And as a misperception I fear it clouds the biological reality—that species live and grow together, in mutual co-dependence.

A: "Today, here, our only purpose is to reach the spring" is a phrase from Stuart Woolf's English translation of Primo Levi’s memoir of Auschwitz, If This is a Man. It’s a kind of vision from the winter of 1944, when all was the bleakest gray, and death pervaded everything (interestingly, Levi describes this as the obliteration of nature by the man-made).

The title is a vision of hope and possibility that nature, glimpsed momentarily outside the fence of the concentration camp, contains. We need nature, in other words, to be able to save ourselves.

In the first part of the book, seeking language to shake us from the paralysis, and applying Hannah Arendt’s “banality of evil,” I attempt to understand our complicity in the eco-crisis.

I hold up “terribly and terrifyingly normal” Germans, as Arendt put it, as a mirror on ourselves, as we, in the wealthiest parts of the world, go about our Earth-destructing lives—“encased in an armor of obstinacy and willful refusal to know,” wrote Levi in If This is a Man.

But Levi, who provides the title of my book, is not present in my work in order to condemn, but rather to find, as he did through the epic darkness, a way to hope. The metaphoric spring must be within reach.

A: I have two works of fiction in early stages. One, Ernesto’s Grief, imagines contemporary versions of Ernesto Sabato, the novelist who also wrote and compiled the Argentinian national report on the coup of 1976 and the dictatorship. That work, Nunca Más—Never Again—is for me a bridge, again, to the genocide of ecological crisis. In this book I’m attempting to work up forms of ecological grief.

The second, in early research, is about a man of many identities, the 18th-century Lenape fighter Teedyuscung, also known as Honest John, Gideon, and “King of the Delawares.” Teedyuscung has much to tell us, I think. But as with projects in the early stage it’s hard to tell yet exactly what.

I just completed writing a decade-plus-long history documentary, American Experiment: The Struggle for Philadelphia. This is the crucible of the American social experiment, 1600-present, seen through the history of a singular city.

A: Among my favorite writers is the 20th-century French novelist Jean Giono, a pacifist and environmentalist who used his Provençal town and environs as a tableau. In 1954, he published a story in Vogue, “The Man Who Planted Trees,” about a man who healed a war-scarred area of southern France by growing a forest.

The story planted an idea—that one day I might do something similar, somewhere—a concrete act that would also seed wild hope.