Leslie Brody is the author of the new book Sometimes You Have to Lie: The Life and Times of Louise Fitzhugh, Renegade Author of Harriet the Spy. Her other books include Irrepressible. She teaches in the Creative Writing Department at the University of Redlands.

Q: Why did you decide to write this biography of author Louise Fitzhugh, creator of the classic children's novel Harriet the Spy?

A: I am exactly the same age as Harriet the Spy. That is to say in 1963 when Harriet was 11 years old, so was I. I was born in the Bronx, and although Harriet lived in an elite quarter of Manhattan, we still shared lots of the same cultural references around New York City in the ‘50s and ‘60s.

When the book was published in 1964, I really wasn’t reading kids’ books anymore and missed the wave. I wouldn’t even hear about Harriet and Louise until working as a playwright in Minneapolis 20 years later. I was hired to write an adaptation of Harriet the Spy for the Minneapolis Children’s Theatre company.

I remember reading it through several times, stunned at how lucky I was—after all this time, and the many ways our rendezvous might have gone awry—to find her.

Once I began writing biographies, Louise Fitzhugh was high on the list of women whose lives intrigued me, and about whom I wanted to find out more. 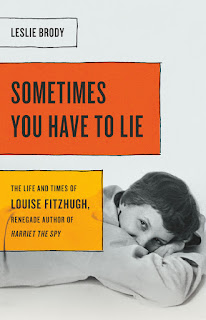 A: The title comes directly from the book; advice from Harriet the Spy’s nanny during a scene when the 11-year-old heroine is friendless and suffering – for being an uncompromising truth teller. It seems unbelievable now, but when I began writing this book I underestimated the unending geyser of lies and misinformation that has since become the central theme of our century and society.

Let’s start with the elephant in the room. The phrase “Sometimes you have to lie” is manifestly different than—for instance—Every time you open your mouth, you abuse your power by lies that twist reality and endanger people’s lives.

We are living under an administration in which con artists, charlatans, and swindlers who hold the highest positions all deny reality for self-interest and to increase uncertainty, confusion, and chaos. Propaganda is used as a stick to beat even discerning people into submission, and to undermine democracy. Sad to say, these bad actors are grown-ups. at least in terms of chronology.

In her lifetime, Louise Fitzhugh was herself a truth teller and a realist. She understood the ways the powerful connive to take advantage of defenseless individuals or marginalized groups. She recognized how children in particular are hostages to the ideological winds.

Louise makes the case in all her books for children’s liberation; she provides life-preserving strategies that children may employ in their power struggle with adults. Lying is one time-honored tactic, self-reliance is another. In Louise Fitzhugh, imagination is central and has to be protected by any means necessary.

In mid-century Memphis, Tennessee, Louise Fitzhugh was brought up with the conventional argument that small fibs lubricate social relations and that, in many circumstances, it was kinder to lie. A girl especially needed to calculate the odds in an unforgiving social code that could turn a misunderstanding into a lifetime grievance.

In adolescence, when Louise realized that she was a lesbian, she also came to understand the risks attending exposure: condemnation by family, denunciation by religion, punishment by state and federal laws. She’d have to bide her time and keep her nerve until escape to a freer place was possible.

In January 2005, a librarian named KT Horning published an article in The Horn Book in which she talks about Harriet the Spy’s influence on her own childhood and observed a “queer subtext” throughout the book.

Horning interprets Ole Golly’s advice to Harriet that “sometimes you have to lie…but to yourself you must always tell the truth” as evidence of Louise’s embedded instructions to gay kids: You are not alone, come out when it is safe to do so.

Homophobes during the culture wars of the late 20th century and early 21st fulminated about coded messages in the media meant to turn schoolchildren gay. Horning suggests that there are secret messages in Harriet the Spy, benign and comforting ones which offer fellowship and reassurance to young people figuring themselves out.

I wish I could say that this advice is obsolete in the year 2020, but unfortunately it still applies. Louise and Harriet’s message continues to be one of love against the odds. “Writing is to put love into the world, not to use against your friends,” Harriet learns, but “to yourself you must always tell the truth.”

A: I conducted over 60 interviews and spent the first two years of this four-year project researching Louise’s life and loves. I was fortunate to meet some of the friends Louise knew during her life, who all had fantastic stories to tell of their life and times.

She was part of a network of extraordinary artists. Alixe and Louise had been part of a social circle of high-flying, mostly queer, career women who in their youth had crashed through ceilings in literary and artistic professions at a rip-roaring velocity: writers of children’s books, mysteries, and crime thrillers; editors at glossy magazines and books; copyeditors, photographers, and illustrators at high-flying ad agencies; theatrical producers and literary agents and casting directors; professors, painters, and actors.

Their mutual friend, the playwright and author Jane Wagner, characterized this extensive cabal as “successful, creative, pleasure loving, ambitious, knowledgeable lesbians.” It was a world of downtown gay bars and uptown house parties (and in the summer, shared Hampton rentals), and writers in the 1950s and ‘60s in New York. I came away thinking that every one of those women deserves a biography!

Q: What do you see as Fitzhugh's legacy today?

A: Baby boomers made Harriet the Spy a success, but it was with later generations that it became a phenomenon. Its influence became more pervasive among the future women of Gen X: girls who were between 8 and 10 years old in the late 1970s and early 1980s.

Within a decade of publication, Harriet the Spy was recognized by the librarians who shelved it, the educators who taught it, and the scholars who memorialized it as one of the first books for children written in a modern, realist style.

Although Harriet the Spy, published in 1964, was in many ways a product of its newly liberated time, it has lasting appeal.

That Louise wrote Harriet the Spy for middle school readers, catching children before they settled into the powerful grooves of gender that would keep many of them tracked through adolescence, was radical. Kids who feel they’re different could read parts of their secret self in Harriet, relate to Harriet’s refusal to be pigeonholed or feminized, and cheer her instinct for self-preservation.

There is, in particular, much to be said for the self-reliance and self-respect that the gleeful Harriet has gained by the end of her book. She has shown free-thinking children they can be happy as themselves, while her truth-telling has launched a million diarists. That’s the legacy for which so many readers love her, and why they fondly remember their Harriet Experience.

A: I’m writing an academic satire—I should say it is writing itself—a roman a clef, about a California college disintegrating during Covid, as the hills around go up in flames. The faculty is divided concerning a new course major in “Spiritual Entrepreneurship.”

I also am putting the finishing touches on two memoiristic novellas. Part 1 is a portrait of Amsterdam and Morocco, as seen from the chaotic nest of a maladroit gang of Irish smugglers. The second section, set in Kyoto three years later, describes the travails of a respectable young Zen monk, who first tries to rescue then betrays a young woman later deported as an international delinquent.

The interlocking themes refer to women and money, political morality and the personal cost of freedom. And while these are serious subjects, the writing is more comic than not.

A: I think I will quote Ole Golly as she quotes Keats.