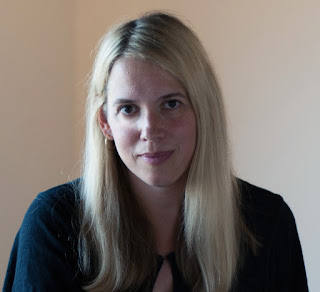 Amy Alznauer is the author of the new children's picture book Flying Paintings: The Zhou Brothers: A Story of Revolution and Art. It focuses on the lives of the artist brothers ShanZuo Zhou and DaHuang Zhou, who illustrated the book. Her other books include The Boy Who Dreamed of Infinity. She lives in Chicago.

Q: How did you learn about the Zhou brothers, and at what point did you decide to write this book, with illustrations by the brothers?

A: About five years ago, an artist friend invited me to an open house at the huge Zhou B Art Center in Bridgeport, Chicago, just down the street from the Sox stadium.

After an hour or so of walking through exhibit halls and working studios, I sat down to read the Zhou catalogue, and came across this beautiful statement made by DaHuang (the younger brother):

“When you paint by yourself, you won’t have the courage to destroy your own painting. You think you are always right. But two people together, they don’t care. With this kind of fighting something comes out that’s never happened before. It creates a new magic.”

I was stunned. This seemed like such profound way of looking not only at the collaborative process (the brothers paint together on the same canvas), but a way of understanding our relationship to each other and to the world.

This statement was about their art, but also about their bond as brothers and their relationship to China (which had shattered their family during the Cultural Revolution).

I thought if I could take those three strands and weave them into a story it could be really beautiful and offer a road map for all of us who are struggling to find a way forward through strife. 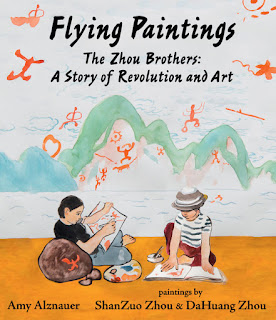 The fact that the brothers themselves illustrated the book (which came about fairly late in the game) is one of those minor miracles in life that I never could have anticipated.

A: I read everything I could get my hands on about the brothers, watched documentaries about their lives, studied the Cultural Revolution, and read Chinese legends.

What surprised me from the outset was their incredible story. I still suck in my breath when I think of how many ways their quest might have been thwarted.

At one point in the story I wrote, “If together with their brushes they could sail out on a stormy sea or turn a sad house into a garden, then they had to keep painting, but how?” Their actual, unlikely lives have that quality of legend.

A: There’s a beautiful legend that the brothers’ grandmother, their PoPo, repeatedly told them.

A god or Immortal visited a great artist and told him that if he painted for 100 days, then the god would make the artist’s paintings live. The artist did what the god said and after 100 days, he opened the door to his studio and the paintings flew off the canvases, out onto the cliff rocks. These same cliff paintings are what inspired the brothers’ work.

So the title Flying Paintings is a direct reference to that legend. But it is also the hope of art in general, that the work we do will not stay in one place, but will somehow fly the coop, fly from the pages or the canvas and into the mind and dreams of the readers or viewers.

Q: The Publishers Weekly review of the book begins: "In folktale cadence, Alznauer traces the story of two brothers, Shaoli and Shaoning, who struggle to create lives for themselves as artists..." Do you think there's a folktale quality to the book?

A: The brothers often say that their life is a journey to art.

They see the emotional experience of life as just as true or even truer than any record of facts, and they often harness that emotional experience through legend, like the one I mentioned above, or this one from Zhuang mythology: After the world was destroyed by fire, a brother and a sister are separated and follow a river in different directions and until eventually they are reunited.

In the painting inspired by this legend, the Zhou brothers become that brother and sister dancing by the banks of a river. Since they see their own lives this way, coming into focus through legend, I wanted the story of their lives to have that same feel.

A: I’m working on several big projects that are outgrowths of my current books, an art exhibit on Flannery O’Connor (her juvenilia and fairly unknown work as a visual artist), a big math and storytelling conference, a geometric art game based on some of the traditional South Indian art that appears on the endpapers of my book The Boy Who Dreamed of Infinity, and some short film projects.

But I’m dying to get to my long list of new book projects and hope to in the new year.

A: I have one other book out this year that sometimes gets lost in the shuffle: 1789: Twelve Authors Explore a Year of Rebellion, Revolution, & Change, edited by Marc Aronson and Susan Campbell Bartoletti.

My chapter is on a fairly unknown Slovenian mathematician, Jurij Vega, who discovered 140 digits of the mysterious number pi in the year 1789, the same year the American constitution was ratified and the French Revolution began.

The story was such a joy to write, for I was able to pair his life with that of Archimedes and so tell not only a story of a single man, but the story of a long-ago spiritual brother, and also something of the story of pi itself and what it meant to be thinking about pi during the Enlightenment, and really what it means for any of us to care about details as seemingly small and unimportant as the decimal representation of a number.