Neal Bascomb is the author of the new young adult book The Race of the Century: The Battle to Break the Four-Minute Mile. It's a YA version of his book The Perfect Mile. His other books include Faster. He lives in Philadelphia.

Q: Why did you write this YA version of your book The Perfect Mile and what are some of the differences between the two books?

A: In high school, I was a cross-country runner, and Roger Bannister and his breaking of the four-minute mile was one of the inspirational stories that our coach would tell us about. It really fired us up! I always thought that it would make for a tremendous read for YA.

As with other of my adult books that I have transitioned to YA, starting with Nazi Hunters, the younger edition maintains the same narrative structure, but it cuts away a fair bit of the sidelights of history, secondary characters, and backstory. I like to view the YA books as a stripped down rocket that reads very fast.

Q: How would you describe the dynamic among the three men you write about, Bannister, John Landy, and Wes Santee?

A: One of the most challenging parts of this narrative is the fact that these three runners only really meet in person at the beginning of the story, and then at the end. When they are battling to break four minutes, they are doing so on different continents at different times. 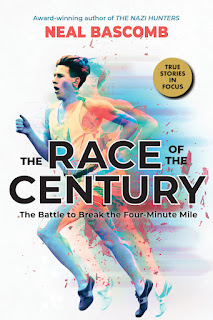 The dynamic is mostly of each of them pushing the other to be the first through the barrier. They would read of each other’s upcoming races, of their times in practice, and so in a way they are constantly in each other’s presence.

Finally, they were very different individuals. To boil it down, Bannister is all mind, John Landy all will, and Wes Santee all heart, in how they approached running.

Q: In your author's note, you write that "true heroes are never as unalloyed as they first appear (thank goodness). We should admire them all the more for this fact." Can you say more about that, and about what you hope readers take away from your book in this regard?

A: On the cover of The Race of the Century, you have Bannister looking exultant as he breaks through the tape under four minutes. It’s an image of triumph.

It was in his humanity, of pushing through those moments, of asking for help when he needed it, that makes him a true hero in my book.

A: Well, not to give away too much of the book, but the “race of the century” is not actually about the breaking of the four-minute mile. It’s the race afterward in Vancouver.

When I started the research, I thought I was simply writing about this record achievement to run four laps of the track under four minutes. But it was the Vancouver race where the real drama lay.

There was not so much surprise in the research though, as joy. I was able to interview and spend time at great length with Bannister, Landy, and Santee. I walked the tracks of their youth with them. I met their friends. We shared dinners. And it was a delight and gave me the chance to really write about them in a truthful manner.

A: Just last week, I finally finished my first original YA history. I’m so excited about it. The tentative title is The Salt Thief, and it tells the incredible story of Gandhi and his salt march in 1930, which really set the blueprint for non-violent movements that continue today.

A: As much as this is a book about running, it’s really a book about achieving your dreams, what it takes, and so I hope readers of every stripe are able to take something away from the lessons of these three athletes for their own lives.