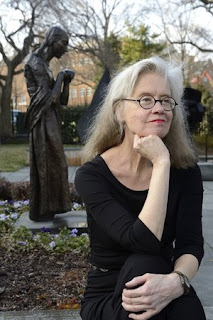 Jean McGarry is the author of the new novel Blue Boy. Her many other books include the story collection No Harm Done, and her work has appeared in a variety of publications, including The New Yorker and The Yale Review. She is the Elliott Coleman Professor in The Writing Seminars at Johns Hopkins University.

Q: What inspired you to write Blue Boy and how did you develop the character of Gabriel Rhab?

A: I wrote BB at a time when my writing day would start with some reading, and I had been reading Kierkegaard, and was on sabbatical, so had all the time in the world to begin a new narrative.

Somehow, the voice SK uses in his philosophy caught my ear as something only possible for certain writers (Dostoevsky, maybe, and a small number of divines/philosophers/prophets.)

When I wrote the first sentence, I could see that I was able to produce the voice, but only as a ventriloquist.

It was clear to me that I knew someone who was perfectly comfortable with this oracular style, and the manner to go with it. The first sentence told me who he was (and I actually knew him!).

At first, I was only interested in presenting the absurdity of this character as it played itself out in a world all too ready to accept and revere: high-end academe (the humanities: critical theory).

Only when I introduced Gabriel’s wife and mother did I begin to wonder how he became himself, and this move made me sympathize with him—that was a surprise.

(I’ve only realized now that I was painting a kind of self-portrait, as any writer/artist with any ambition feels a version of the kind of drive that GR both endures and feeds.  Clearly, it wasn’t an easy life, in spite of the rewards of fame.)

Q: The writer Eileen Pollack said of the book: “Not since Who’s Afraid of Virginia Woolf? has a writer given us such an intense, provocative and poetic look at the tensions between art and marriage, illusion and reality.” What do you think of this?

A: Although I was flattered and touched by Eileen Pollack’s generous reading of the book, I was surprised by this comparison, possibly because, in the play, the two spouses attack each other in theatrical bouts of verbal battery, where it’s hard to tell who’s the aggressor and who’s the victim. The couple are so well matched in spirits and spite.

In Blue Boy, no one is a match for Gabriel, and all his potential adversaries work secretly and silently (that is, behind his back). The battles in BB are mostly internal. I also don’t think of the play as comic.

I was fascinated by the dualities the critic sees in the novel: art and marriage; reality and illusion. Gabriel’s real partner is Christopher Tomlinson; the marriage to Althea seems, if anything, to foster Gabriel’s art and eccentricities. 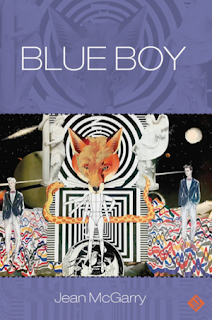 Q: Did you know how the book would end before you started writing it, and did you make many changes along the way?

A: I’m not too much of a planner, but as I mentioned earlier: as soon as I hear the voice of a character in the narrative (even if the narrator is third person), I know what I’m dealing with.

Also, Gabriel is at a critical but late moment in his life and career, so the end is in sight, even for him.

As I mentioned, Gabriel is drawn from a real person and that person indeed had a Sancho Panza of his own, but I used another person for Christopher Tomlinson, a person who would counterpoint G’s excesses.

I also didn’t plan for the mother’s special touch, but as I wrote about her, I loved her more and more, and gave Gabriel her love. (I hope that doesn’t sound insane.)

Q: What do you think the story says about academia?

A: Well, I have spent 30-plus years as an academic, so I can’t think it was all bad, but there was a time when a kind of lunacy spread, where literary critics (English professors) thought they could answer all questions, and set out to do it.

It was a heady time during the reign of Derrida, Bloom, Barthes, Foucault, etc., and I read with great interest a lot of this work, but the tone of divine revelation was always there, and it seemed comical to me.

And it also made fiction writers seem beside the point, since critics “always already” knew what we would say.

My career was spent at a very heady, highly competitive institution, and I had a clear view to the action, although didn’t participate much in it.

But, your question nags at me, and I feel I have to say more: a life of intense reading and writing does make one strange, but it’s the competitiveness that pushes one over the edge.

A: I just finished a memoir, Herself, and Others, another project that evolved on its own.

I wrote a piece about the nuns I went to school with (for 12 years), and then just decided to continue, so the memoir is not strictly chronological, but is divided into topics: “Fortitude,” “The Sixth Commandment,” “Men,” “Jobs,” etc. It was fun to write, as I concentrated on the “others.”

Q: What else should we know?

A: Blue Boy was a nice break for me, because much of my writing life has been devoted to accounts of early life in an Irish-Catholic neighborhood in Providence, Rhode Island.

When I left RI to go to college, I realized I came from a place that people wouldn’t recognize as life in the US in anything like the recent past. Why I felt I needed to make a portrait of this life is a mystery to me, because I was the eternal underdog.

JackLeg Press and its marvelous staff have offered a generous hand to the underdog, and I am very grateful.

Thanks for such interesting questions.