Heather Henson is the author of the new young adult novel Wrecked. Her other books include Dream of Night. She is the managing director of the Pioneer Playhouse theater, and she lives in Kentucky.

Q: In Wrecked's afterword, you cite Shakespeare's The Tempest as an inspiration for this novel. Can you say more about what inspired you to write Wrecked, and how you created your characters Miri, Fen, and Clay?

A: I grew up in the world of theater, and my father was always quoting Shakespeare, so I just kind of fell in love with the language and the stories from an early age. I really like when a director comes up with a new way to stage a Shakespeare play, and I always gravitate toward books that put a new spin on a classic tale.

For several years, I knew I wanted to take the iconic story of a father and daughter stranded on a deserted island (the basic plot of The Tempest), and use it as a framework for a contemporary novel, but it took lots of starts and stops to find the voice, or the three voices, of the book.

My work is very character driven, so once I start hearing a character speak to me, writing gets a whole lot easier. In Shakespeare’s The Tempest, we’re focused more on Prospero and the adults, but I was interested in his 16-year-old daughter, Miranda’s, perspective.

How does it feel to have a powerful wizard for a father, to be shipwrecked on a deserted island with no other people around? How does it feel to grow up believing you’re one thing, and then to suddenly be told you’re something completely different?

In my book, Miranda became Miri, and Ferdinand (the boy she falls for) became Fen. In the play, Caliban is not a nice guy, but I wanted to see if I could turn someone who makes bad choices, who has bad impulses, relatable and ultimately likeable, so Caliban became Clay.

Q: The novel is set in rural Kentucky--how important is setting to you in your writing?

A: All my books so far have been set in Kentucky. I’ve lived other places, but my roots are deeply planted in my home state. Parts of Kentucky are very removed from the outside world, and so I felt that placing Wrecked in the Knobs region was a perfect parallel to the deserted island in The Tempest.

Miri and Poe (Prospero in the play) have land all around them, not water, but in a sense, they are shipwrecked in this place that’s physically challenging to get to, a place that’s cut off, remote. 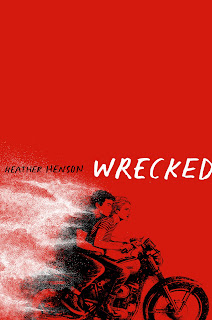 Q: The opioid crisis is a major theme in the novel--why did you decide to include that topic?

A: Again, I was looking for a modern parallel for what happens to Prospero. In the play, he’s developed these magical powers on the island where he and his daughter have been shipwrecked for 13 years. As I was writing and researching this book, I started thinking about what I could substitute for that “magic,” what would be a modern equivalent, and it just hit me: meth.

At that time, there was always a story in my local paper about a meth house being raided or exploding or kids being taken away from parents who were dealers. Meth was on the rise again because it was a cheap way to get high since opioids were no longer as accessible.

People I knew personally started dying – fentanyl overdose, oxy overdose, heroin overdose. It was everywhere, and I felt compelled to write about this terrible, tragic thing that was happening in my own backyard.

A: The Tempest opens with the thunder crash of a raging storm – a storm Prospero created through his magic in order to shipwreck his enemies. Throughout my book, storms are a major motif, and wrecked – both emotionally and physically -- is how a lot of my characters feel, so the title came out of that.

A: I’m working on another contemporary YA set – again – in Kentucky. My family actually runs a campground (along with our summer stock theater, Pioneer Playhouse), and I’ve been noticing a huge change over the past few years, especially since Covid-19.

It’s not just tourists parking in the campground anymore, but long termers, families who are down on their luck because they lost a job, lost a house or an apartment, and now are living kind of like nomads.

My novel will again follow a few different POVs, teens growing up in a campground, the everyday struggles they face.

A: A couple of years ago, my house literally burned to the ground. My husband, my three children and I barely made it out. We lost everything except the pajamas we were wearing.

I’d already written the explosion and fire scene in Wrecked, but it was interesting to go back to it when I was revising, after I’d been through a similar experience. Luckily, none of my family suffered burns in our fire, but it was absolutely terrifying.

When you lose everything, you learn pretty quickly what’s important: people, not stuff. My family, and the community that rose up to help us – that’s all that matters.