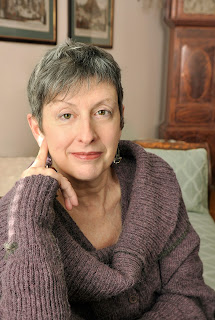 Joan DeJean is the author of the new book Mutinous Women: How French Convicts Became Founding Mothers of the Gulf Coast. It focuses on 18th century French women who were sent as prisoners to the U.S. Gulf Coast. DeJean's many other books include The Queen's Embroiderer. She is Trustee Professor of Romance Languages at the University of Pennsylvania.

Q: In our previous interview, you said, “I could never forget the women who were shipped off to Louisiana” after learning about them while researching The Queen’s Embroiderer. What intrigued you about them, and how did you track down information about their lives?

A: For decades, I’ve done research in the archives of Parisian prisons housed in Paris’s Arsenal Library. That’s where I came across the arrest records of the women who were deported to the French colony in the future United States in 1719.

The minute I found the first cases, I knew that their story was one I wouldn’t be able to forget. These women were victims in so many ways – of social injustice, of unbearably corrupt police practices, often of family violence. But they never gave up, never stopped fighting to proclaim their innocence.

The fact that on the rare occasions when these women have been remembered, they are always called “prostitutes,” just as police officers claimed in 1719, well, that was too much for me to live with.  This book is my attempt to set the record straight.

Q: Why did these women end up in prison, and what were their lives like in France?

A: In France, most of the women knew lives marked by depravation and hardship: they  found themselves in prison for different reasons, but always because of the desperate poverty that gripped France in the early 18th century.

When uncommonly harsh winters resulted in famine, many fled the countryside for Paris, where the police were authorized to round up anyone they could accuse of vagrancy and lock them up on the spot. 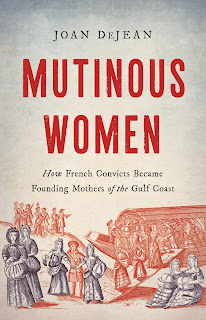 Many women worked in low-paying jobs, as laundresses or dish washers in elite households. If anything went missing, it was easy to blame the laundress, who was incarcerated with no form of due process. And many women were denounced to the police by their own families – after all, a woman in prison was one fewer mouth to feed.

Q: Once they arrived in Louisiana, how prominent a role did they play in their new surroundings?

A: Deported women rose to prominence in various ways in the settlements where they made new lives.

Some became major property owners – by the time of her death in 1734, one woman deported in 1719 owned five properties in what is now called the French Quarter in New Orleans.

Some made noteworthy marriages, to French officials in the colony, to ships’ captains, even to aristocrats. Many played significant roles in the process by which outposts such as Mobile became cities and took on an identity.

Q: What do you see as their legacies today?

A: The many thousands all over this country who are descended from women shipped off across the Atlantic on La Mutine are their most evident legacy. And I say “many thousands” as a conservative estimate.

Since I’ve been working on this project, descendants have contacted me from so many places – from Texas to New Jersey, from California to New York. I am certain that many people who are descended from one of these women are not aware of their family’s past.  These deported Frenchwomen have left a truly indelible mark on this country.

A: I’m hesitating about what to do next.  I’m sure that this is because of the fact that I’ve been deprived of the possibility of long stretches in the archives in Paris.

A: I would like to stress one point above all: anyone who is a descendant of any of the women deported from France in 1719 should be proud to have such an ancestor.  They were extraordinary women!