Lillian Faderman is the author of the new book Woman: The American History of an Idea. Her many other books include The Gay Revolution. She is professor emerita at California State University, Fresno.

Q: What inspired you to write Woman?

A: I’d been thinking about it for a while. I talk in the book about my growing up in the 1950s and my junior high school and pachuca classmates. I thought about how who we were supposed to be was different from who we were. I ended up back in the 17th century to answer my questions.

A: I had been collecting material for a long time, research on the history of women, and [the idea of] woman.

When I focused on this book, I got to do great archival research before Covid. When I needed more, I found archivists who were very helpful, and could do what I couldn’t do in person.

It was a bit of a challenge to finish the book in the height of the epidemic, but there was enough material in the files and there were archivists of good will.

Q: Was there anything especially surprising that you found?

A: I was so interested in writing about the 17th century. There was a letter from Roger Williams, who had been in the Massachusetts Bay Colony and was a prominent personage.

He had written a letter to Governor John Winthrop about a terrible massacre in Connecticut by colonists of a Pequot Indian village. What often happened was that women were peacemakers and they would go to the other tribe and sue for peace.

The Pequot Indians sent a top woman peacemaker to the colonists. Roger Williams wrote, We questioned her much to her truth and sent her away. He didn’t believe women had the power to negotiate. They tried again, and were sent away.

Then they tried again with four women and one man, and he was willing to listen to the man.

One visitor to the Algonquin couldn’t believe a woman was her own person and did what she wanted. She was sexually free to make her own choices. For the colonists, it was hard to understand that. It fascinated me how totally baffled they were by the respect women had among the tribes.

It wasn’t the same in all the colonies, except that ultimately it was. A woman from Holland came to New Amsterdam. In Holland, women could be businesswomen or merchants. Margaret Hardenbroeck was, and she increased her wealth and had ships she sent back and forth across the Atlantic.

To my chagrin, she was also a slave trader.

When the British took over in New Amsterdam, and made it New York, she was covered by British law. As a married woman, she owned nothing in her own name. It all went to the husband she married, who had been her assistant.

Q: You’ve mentioned the idea of “woman” vs. “women.” Could you say more about that?

A: Woman is a construct and always has been. Simone de Beauvoir says one is not born but becomes a woman. To be a woman means certain things having female anatomy doesn’t mean.

It’s a socialized construct that may change from generation to generation, but it means a woman is supposed to be passive, gentle, inferior. A woman faces subjugation to her husband. It came through the centuries in various forms.

I would hope we’re done with that, but some remains. As late as the first decade of this millennium, a group of women friends who had all gone to Princeton, to Yale, to law school, were giving it up and going back home. The New York Times called it the opt-out revolution. 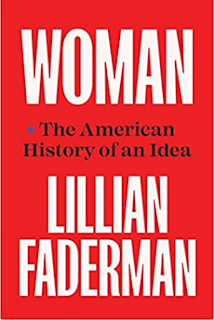 One woman said we can admit we’re enjoying the stereotypical roles of mother and caregiver—so what if we have fancy degrees? We can claim the role of woman as it’s been constructed.

I also quote a 60 Minutes interview Lesley Stahl did, in the early part of the millennium, with a woman who was earning half a million dollars a year working for Oracle. In the segment, there was excitement that she was wheeling a baby carriage and so proud to have given up her job, and was going back to a traditional role.

Q: Of the various eras you look at in the book, which would you say had the most impact on women’s roles in the United States?

By the 1950s, those women pioneers who made it possible for women to go to college, vote, go into professions, were long forgotten when I came along. But we were still able to do what they did. In my case, it was still possible for me to get a Ph.D., because they had pioneered it.

Q: What do you see looking ahead for the idea of “woman” in American society?

A: I tried to answer that question in the epilogue, The End of “Woman”? There are some interesting developments. One, trans people and those who identify themselves as gender nonbinary have called into question in interesting ways the idea of woman.

I interviewed a trans woman who’s also a psychiatrist. Kinsey developed a scale of 0 to 6, heterosexual to homosexual. This trans woman said there needs to be a scale of gender too, 0 being totally masculine and 6 being totally feminine. She said she was a 6 though assigned male at birth.

Young people are doing just that. A Pew Research poll in 2019 interviewed Gen Z, and one question they asked of males was, to what extent do you feel totally masculine. It was only 1 in 4. One in 5 women felt they were totally feminine. It’s such a contrast to those women ex-lawyers.

Are we ever going to go back? One thing that’s constant is change, so who knows how things will  change. I speculate in the epilogue about a dystopian future, like The Handmaid’s Tale. Male sperm count has dropped since the 1970s, and if this continues, by 2045 a large percentage of males will not be fertile.

What does that mean? Will women glom onto the few fertile men, and have lots of children?

In the epilogue, I go through what pundits in the 18th, 19th, and 20th centuries said about women. Thomas Jefferson, in the midst of the French Revolution, said American women were not like French women, not as interested in politics—they would leave that to their husbands. They were there to soothe their husbands.

We have had a woman vice president and speaker of the House. When President Biden gave his State of the Union message, I loved that image of the speaker and vice president behind him. It made me think of what Jefferson had said.

Then there’s the idea of women’s modesty, that they were passionless and would respond to their husbands as a conjugal duty.

I thought of the immense popularity of the song "WAP" by Cardi B and Megan Thee Stallion. There are 300 million downloads of that video. It’s such a wonderful message. Women have the right to claim their sexuality.

A: I just finished my 16th book—I will take a little rest.