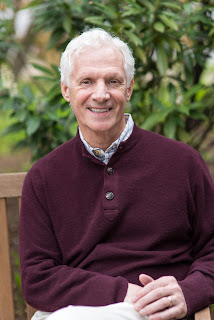 James V. Irving is the author of the new novel Friend of the Court, the third in his Fixer series, which began with Friends Like These and continued with Friend of a Friend. An attorney and former private investigator, he is based in Arlington, Virginia.

Q: How did you come up with the idea for your Fixer series?

A: I always wanted to write. I studied it in college and pursued it as an avocation, and then decided to take a crack at it. What type of book? Detective stories have a lot of plot, a beginning, a middle, and an end, and I had been a private investigator and a lawyer.

Q: I was going to ask you, how do your own experiences as a lawyer and a private investigator factor into your writing?

A: I was an English major in college and didn’t want a desk job. I had the opportunity to be a private investigator, and it sounded great for the short term. I went into it thinking it would be a source of some fiction if I got around to it. I had a lot of crazy adventures that factor into the books.

The first half of my law career was as a trial attorney, and I used those experiences to blend [into the fiction].

Q: This is your third novel about Joth Proctor—do you think he’s changed over the course of the three books?

A: The idea that both Joth and the other characters change over the course of the books—that is happening. 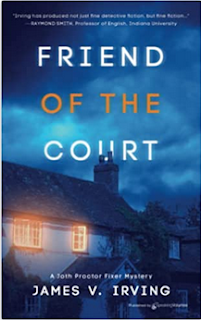 Joth Proctor and Jim Irving have a number of things in common, and not in common. We’re both from Massachusetts, we went to UVA, we have experience playing lacrosse. I had a sense of who the character was, and from that I was able to create a totally fictional character.

Q: Do you usually know how your novels will end before you start writing them?

A: I just finished the fourth book, and in the fourth one the answer is yes. In the third and second, no. With the first book, I had it more fully thought out because I didn’t know I could write it. From that point, I just dug in.

In my view, once you have five or six repeating characters, you need two, three, four, five different plotlines, and they have to intersect and you need to find a way to tie it all together. It’s hard to do that—it’s complicated.

Q: How did you come up with the plot for Friend of the Court?

A: The third and fourth books come out of the way the previous book ended. Joss finds himself in terrible straits, and needs to find a way out of it. You deal with the problems you’ve created while creating new ones.

Q: What do you hope readers take away from the books?

A: I hope they’re entertained, perhaps amused. I hope the books are thought-provoking. These people aren’t moral paragons, except maybe Heather. They’re all pushing up against the lines between good and bad.

The books are looking at the moral choices people in Joth’s position have to face, and make decisions that are just.

Q: What do you see for Joth’s trajectory in the future?

A: I have given this a lot of thought. The relationship between Joth and Heather has to progress in some direction. You can’t just keep playing hide and seek with the reader. I’m trying to keep things moving forward, and keep the possibilities open, while bringing a conclusion to the relationship’s direction.

You will see more of Tran and Jimmie Flambeau, which was not by design. It’s a situation where I don’t tell the characters what to do, they tell me what to do.

A: I’ve spent three or four years on these books now, and it’s been pretty intense. I think they’re fun books, thought-provoking books, and people will be invested in the characters’ adventures.