Ashley Winstead is the author of the new novel Fool Me Once. Her other books include The Last Housewife. A former academic, she lives in Houston.

Q: What inspired you to write Fool Me Once, and how did you create your character Lee Stone, aka Stoner?

A: I’ve been an avid romance reader my whole life, and one element I’ve always gravitated to is main characters with bite—women who are messy, sharp-tongued, troublemakers, fun-seekers. The party girls dancing on tables, cracking up with their friends the morning after, women who will take a dare and run with it.

With Lee, first and foremost, I wanted to write a character I would actually be friends with, someone who would make me laugh and challenge me and take me on adventures.

And as a lifelong fan of Bill Lawrence’s TV shows (Scrubs, Ted Lasso), I think what makes me laugh are smart, self-deprecating characters who will go to great lengths for their goals and have a core of goofy warmth.

Second, with Lee, I was determined to write a woman who has really messed up in love and who still has a lot of things to figure out about herself—a character with a real internal battle, serious patterns to unlearn.

I wanted to show that even if you’re in the middle of your journey to becoming the kind of person you want to be—even if you’re still figuring out your relationship to alcohol or family or mental health—you deserve grand, epic love. You can be a work in progress and still deserve a HEA. (If not, I fear we’re all screwed!)

I wanted to write a romance that didn’t skirt around issues like infidelity and grief and maybe a little too much social drinking, but package all of that in a light, comedic frame. So that was the challenge I set for myself with Fool Me Once!

Q: How would you describe the dynamic between Lee and Ben?

A: Five years ago, Lee and Ben were each other’s favorite people in the world. They were madly in love. And then their relationship fell apart thanks to Lee’s issues (a thing she acknowledges). So when they meet again, tensions are sky-high. Both of them are carrying a lot of baggage and neither knows how the other feels.

Because there’s so much uncertainty—and because the last thing you want to do is be vulnerable around the person who broke your heart—it’s easier and safer to fall into an antagonistic relationship. So that’s what they do: they immediately decide that rather than work in partnership on their political campaign, they’re going to compete to see who can score the most victories and professional acclaim.

Lee and Ben make pretty killer enemies because they know each other so well and thus have a lot of ammo! The banter is strong with these two.

Of course, as they travel all over the state campaigning together, all the things that drew them to each other in the first place draw them back in now, and so they almost can’t help but become friends again…and then, over time, something more.

But of course that brings up the question: are they simply doomed to repeat history, or have they grown enough as people to change their fate? I describe Fool Me Once as a lovers-to-enemies-to-lovers because it’s a wild ride!

Q: The novel is set in the world of Texas politics. How important is setting to you in your writing? 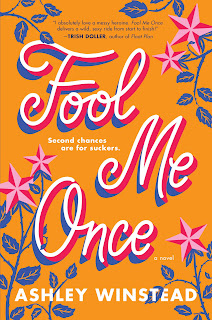 A: Setting is always critical—there’s always a reason why my books have to be set where they are. And this is certainly true of Fool Me Once.

Part of what makes Lee, Ben, and their entire green energy campaign such underdogs is the fact that they’re progressives in Texas, a historically conservative state that is also a big oil producer. Getting a bill passed is hard enough, but an environmental bill in Texas? No one thinks it’s possible except for Lee and Ben, and their dogged determination bonds them despite their rollercoaster history.

I would go so far as to say growing up progressives in Texas has helped make Lee and Ben the people they are: tenacious, optimistic, able to roll with punches. They’ve both learned that when you want something badly enough, you simply don’t give up.

I got the idea to write this book while I was working full-time at a policy-driven philanthropy here in Texas—we were actually doing a lot of the political work and having the kinds of strategy conversations Lee and Ben have in the book.

I know at first glance readers may raise their eyebrows at the idea of a romantic comedy set in the world of Texas politics, but I’m telling you, as someone who has been behind the scenes in this world, it is ripe for parody.

I was very moved by the alternate political world Casey McQuiston gave us in Red, White, & Royal Blue—I actually teared up reading about the female president in that story. So I knew I wanted to do something similar with Fool Me Once. It’s my love letter to Texas progressives and really all the people fighting the good fight in what can feel like hopeless situations.

I hope reading it is a cathartic, joyful, and optimistic experience, the way reading RWRB was for me.

Q: You've written two suspense novels and this is more of a romantic comedy. Was your writing process different at all with this book?

A: Truthfully, I find it much harder to be funny and romantic than dramatic and murdery. I don’t know what that says about my brain.

So even though the process was the same—I have my writing process down pat and it never changes—the actual writing of Fool Me Once challenged me more than my suspense novels. It’s almost easier to know what will gut people than it is to know what will make them laugh, because humor is such a tricky thing to nail and is very easily lost in translation.

One thing I did differently with Fool Me Once is that I read the entire book out loud to my sister as I wrote it. I’d write a few chapters, then read them out loud to her, write a few more, then read, and so on. It was extraordinarily helpful to hear the cadence of my writing out loud and to gauge from her reactions which jokes were landing and which weren’t.

For everything that didn’t land, I’d highlight it, go back, and rework it to make it sharper and punchier. Ditto the romantic and spicy scenes (let’s put aside the awkwardness of reading those out loud to your sister—thank god we’re super close!).

If my sister swooned or blushed, I knew what I was doing was working—if she didn’t, I went back to the drawing board. It was so helpful that now I’ve roped her into listening to all my books as I write them. Sorry, Mallory!

A: I’m very excited to say I’ve finished the sequel to Fool Me Once, which I love as much or even more than the first. There’s a great character in the book who doesn’t get their happy ending (quite hilariously the opposite), and I knew they deserved one, so they’re the focus of the sequel. I can’t wait to share more details!

Beyond that, I’m always working on a few projects at a time, so I’m currently drafting a more drama-tinged romance about a California indie rock band.

I love this story with my whole heart—it’s about grief and making art to channel it and finding someone when you least expect it who draws out the best parts of you. Think A Star is Born but enemies-to-lovers and set in the sun-soaked world of West Coast indie rock.

I’m also hard at work on my third thriller. I can’t say much about it until we announce, but it’s about girlhood and how the world tries so hard to deny and inhibit what’s powerful and threatening about women, and one woman who resists (to monstrous consequences).

A: I’d love to add that while romantic and self-love are at the core of Fool Me Once, a close second is friend love. Besides her mom and sister, the most important people in Lee’s life are her best girlfriends, who are loud and pithy and funny and gentle by turns, and all the most loyal people.

I had the absolute best time writing about this tight-knit friend group laughing, partying, cozying up, celebrating holidays, you name it. It’s probably pretty obvious I wrote this book during the first year of the pandemic when I was really missing my friends, because I poured all that love and camaraderie into Lee and her crew.

So if you’re someone who loves to read books with strong friendships, Fool Me Once is for you!