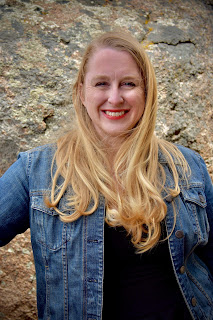 Aimee K. Runyan is the author of the new historical novel The School for German Brides. Her other books include Across the Winding River. She lives in Colorado.

Q: What inspired you to write The School for German Brides, and how did you create your characters Hanna, Tilde, and Klara?

A: I got the idea to write The School for German Brides while researching for Across the Winding River (my immediately preceding novel). I read about the bride schools when I was looking up information on Nazi wedding traditions and I was properly horrified at the propaganda these schools spewed out.

I imagined a young woman (Hanna) being forced to attend one of these terrible schools, the events leading up to her indoctrination, and how she might come out the other side. Hanna was definitely the genesis character.

My amazing editor, Tessa, rightly pointed out that we also needed to show the Jewish side of the story in pre-war Berlin, and so Tilde was born. As a Mischling, she was torn between the Jewish and “Aryan” worlds. I loved the complexity of her and how she tried, with every fiber of her being, to protect those around her.

Klara was a fun discovery very early on that linked Hanna’s world to Tilde’s. She went from being a very small player in Hanna’s life to possibly the most interesting character of the book. She tried so hard to meet her parents’ expectations, she never stopped to consider her own.

A: Given that this was a book written during the heart of the lockdown, no travel to Germany was possible, sadly. I did what I could with research books I ordered and what I could find in online archives. Thankfully, much of what I needed to know wasn’t so obscure that I had a hard time finding what I needed.

One of my favorite things I learned about was the French bookshop in Berlin run by a Jewish woman, Françoise Frenkel. It was a fascinating look at how quickly Berlin became such a dangerous place and how the Nazis did so much to control the press under their rule.

Q: The author Kris Waldherr said of the book that it describes “a world where secret acts of feminine resistance flare beneath the surface, along with heart-tugging compassion and daring bravery.” What do you think of that assessment, and what do you think the book says about resistance by women in Nazi Germany? 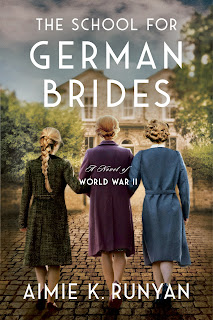 A: I think the assessment is a sound one. Women in Germany were oppressed to a staggering degree. My “Aryan” characters certainly aren’t strong resisters in the sense we read about in other books. They are nothing like the French resisters who risked their lives to save their country from the rise of fascism.

As Ms. Waldherr wisely points out, these acts of resistance are secret and often small. Hidden acts of compassion and kindness that might mean the difference between life and death for one of their countrymen.

To be sure, I think all the Aryan characters in this book are all complicit in the atrocities of the war. Some, more than others, are able to recognize this and do what they can to atone for it.

I absolutely didn’t want to craft an Aryan savior narrative, but to show how two teen girls were able to think beyond the roles that were predestined for them and to make a small difference in the world.

A: I hope that readers see my assertion that political neutrality and complacency are impossible and just lead to being complicit in oppression.

I hope they’re able to appreciate the limited scope of power women had under the Nazi regime and how these bride schools sought to promote that subjugation.

The bride school itself may only feature in a few chapters, but Hanna is being groomed to become the perfect German bride from the moment she crosses her aunt’s threshold.

A: I’m writing a triple timeline family saga set in Paris that spans from the Siege of Paris and the Paris Commune from 1870-71, to the postwar era, to the late 1990s.

It all centers around a small bakery in the heart of Montmartre and the family who passes it from generation to generation. Think Les Misérables meets Chocolat. It’s (at least tentatively) called A Bakery in Paris and should be out in 2023!

A: I’m excited about two other projects I’m working on for 2023 as well: a contemporary women’s fiction project set in Provence and a historical anthology collection with dear friends Rachel McMillan and J’nell Cieselski. So excited to have so many irons in the fire!