Denise Williams is the author of the new novel The Fastest Way to Fall. Her other books include How to Fail at Flirting. She lives in Iowa.

Q: What inspired you to write The Fastest Way to Fall, and how did you create your characters Britta and Wes?

A: I was working with a group of college students for an overnight retreat and we asked the students to think about a time they felt strong.

As I did the exercise myself, I thought about being in the gym and crushing a tough workout, and I thought about what it would mean to fall in love in that moment when you felt so strong and like you could do anything.

I’ve been a fat woman my entire life and the gym has been a scary place and an uplifting place. I was excited to show exercise as a thing someone does and not a statement on their body and its value—that’s how Britta came to be.

Wes as a character actually came to me first, though. I loved the idea of a character who is physically strong but emotionally cracked and I love how the two characters show each other strength.

Q: Can you say more about what you think the novel says about fitness and body positivity?

A: I think the novel says that fitness, that exercise or paying attention to the foods that give us energy is an option for everyone.

As I mentioned above, I’ve been a fat woman my entire life and so often exercise or paying attention to food is seen as a statement about not liking yourself and not liking your body. That’s a message so many of us internalize, fat or not, and it can be so dangerous.

I hope the book speaks to readers on an empowering level—here is someone engaging in an exercise journey because they want to be stronger. The character doesn’t transform or find love because of weight loss, they find strength and love because they are strong and lovable people. 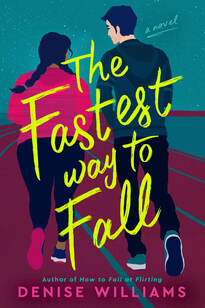 I think the book takes the approach that are bodies are all precious but it also doesn’t shy away from how society’s messaging to fat people can be internalized and make us question ourselves. I hope for most readers, that’s refreshing to see a character battle occasional self-doubt and win.

Q: The novel is set in Chicago--how important is setting to you in your writing?

A: I think the setting is always a background character in a story, but I chose Chicago because How to Fail at Flirting had already been set there and the characters mingle between books.

I liked this setting, though, because we were able to have two characters, both close to home, from wildly different settings—Wes from the Southside of Chicago and Britta from rural Illinois.

A: The working title for this book was 10,000 Steps which doesn’t exactly speak to all the romance in the book. The Fastest Way to Fall can be credited to my agent who I believe got the idea for this title while on a run herself.

Titles are so challenging and we’d been bouncing ideas around for weeks, but this one hit and it’s perfect. Both Britta and Wes fall and fall fast, but falling and picking one’s self up are recurring themes in the book, too.

This spring and summer, I have three audio-first novellas about love and romance in and around the airport.

My third novel, Do You Take This Man, will be out Sept. 6 and is the story of Britta’s best friend, RJ, a divorce attorney and wedding officiant who has to work with a seemingly dude-bro wedding planner. I had a blast writing this enemies with benefits novel.

A: I don’t think so—thank you for speaking with me!