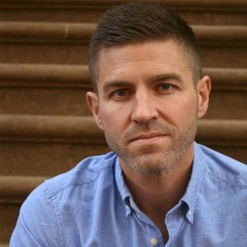 Grant Ginder is the author of the new novel Let's Not Do That Again. His other books include The People We Hate at the Wedding. He lives in Brooklyn.

Q: What inspired you to write Let's Not Do That Again, and how did you create the Harrison family?

A: I’ve always been deeply interested in the question of why we lie to the people we love. Is it better to withhold the truth from someone to protect them, or is honesty always the best policy?

The more I thought about these questions, the more I realized that they had similarities with many of the moral struggles that have played out in politics, particularly during the last decade or so, when lies (or “alternative facts,” as one former presidential advisor prefers to call them) have taken on an outsized role in the national discourse.

Of course, the type of lying I’m talking about as it relates to the people we love diverges from the type of lying that was done by the previous administration, which I consider to be manipulative, dangerous, and fear-based. Rather, what I’m interested in is the way we bend the truth in service of a larger, moral good.

All of this ruminating is what led me to create the Harrisons, a family that, thanks to some, er, very bad decisions, is about to be faced with a tough moral choice.

By way of introduction, the family’s matriarch is Nancy, who’s in the final months of her campaign for U.S. Senate. She’s a star of the Democratic Party, but as Election Day gets closer, it becomes increasingly clear that the biggest roadblock to victory won’t be her opponent or low voter turnout, but rather her own children.

Nick, the oldest, worked for years as Nancy’s fixer in Washington, a position that he abandoned for a teaching gig at NYU. He’s trying to strike out on his own, but that’s proving to be more difficult than anticipated, particularly when his mother keeps showing up asking him to do her dirty work.

Meanwhile, his sister Greta inexplicably ditched her job as a paralegal to work at an Apple store in Brooklyn. When she’s not at the store trying to avoid customers, she holes up playing online video games in the room she rents from a Hungarian model in Bushwick.

She’s smart, pretty, and existentially adrift. She’s also having a secret affair with a French fascist which is about to be a major headache for Nancy.

Q: The Kirkus Review of the book says your writing is “characteristically insightful on sibling and parent-child relationships and politically on message.” What do you think of that description, and how would you describe the relationships in the book and also the politics?

A: I’m incredibly flattered by it! Let’s Not Do That Again is less about politics, and more about a family struggling to stay together, and so I’m thrilled that came through for the reviewer. 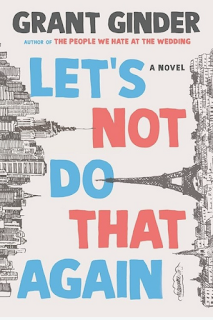 The political campaign provides a set piece on which all the drama can unfold, but at its heart this is a novel about the sacrifices that a mother and her children make for each other, and the uncomfortable truths those sacrifices compel them to overlook.

In terms of the politics themselves, I’d like to think that Nancy is someone who, despite her evident flaws, is trying to make the world a better place for her children. Mostly, I was concerned with humanizing her.

I worked in politics for a bit after college, and my time in D.C. led me to develop one very strong opinion: our elected leaders are just as hapless and screwed up as the rest of us. No one knows what they’re doing until the moment they’re doing it, and any glamor or respectability you might perceive is a trick of setting and camera angles.

That is something that interested me, and still interests me. And it’s why Nancy’s campaign is the way that it is.

A: I’m always so impressed by writers who can jump into a story with no idea of what’s going to happen on the next page—I’m way too anxious of a person to ever try that! Rather, I always need to have at least a vague idea of where the plot is headed, lest I get lost in the proverbial forest with no way out.

That’s not to say I didn’t make some major revisions as I wrote—I try not to get too married to any one idea—but I did have a general plan for the Harrisons.

For this book in particular I was interested in playing around with the principle of Chekhov’s gun, which basically states that if you introduce a rifle in the first chapter of a story, it better be fired by chapter two or three.

When I started writing this book I was reading a ton of mysteries, and I was surprised by how much I loved watching all the pieces of a story fall into place.

You read Murder on the Orient Express or And Then There Were None, and the satisfaction you feel isn’t necessarily from seeing a world that you recognize, but rather on in which seemingly inconsequential details end up having larger-than-life consequences.

There’s pleasure in that, and I wanted to see if I could recreate that pleasure in Let’s Not Do That Again. Granted, in my case the gun becomes a trash compactor, but the principle nonetheless remains the same: I wanted to write a book that was fun.

A: My biggest hope is readers see at least a bit of themselves in the Harrisons. They are, at least in my experience, like any modern family: they lie and hurt each other and stumble and fall, but at the end of the day, they help each other stand up back up, and that’s what’s important.

I try not to have any overt “messages” in my novels, but if Let’s Not Do That Again has one, it’s this:  although the ways we love each other may be imperfect, that doesn’t render that love any less worthy.

A: Good question! I’ve just started working on the first draft of a project that I’m tentatively calling Beefcake. Without giving too much away, I’ll say that it traces a single year in the life of a gay teenager who’s living in Laguna Beach, California in the mid-1990s.

It draws on some of my own experiences, and it’s a bit different from my previous novels in that it’s entirely written in first person.

I think that, in light of the macro-level chaos that we’ve experienced in the last few years, I’ve been more and more interested in retreating to a time when life felt personally complicated (read: adolescence) but—at least on the societal level—was retrospectively simpler (read: the ‘90s).

I’m still in the early stages of it, which is terrifying, but also exciting; I never know quite how the pieces of a novel are going to come together until, thanks to some miracle (or banging my head hard enough against the wall) they do.

A: I hope you enjoy the book! I spent three years creating the Harrisons and thinking of them as my surrogate family. I love them dearly, and I hope readers do, too.