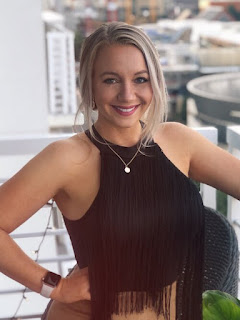 Jeneva Rose is the author of the new novel One of Us Is Dead. Her other books include The Perfect Marriage. She lives in Chicago.

Q: What inspired you to write One of Us Is Dead, and how did you create your cast of characters?

A: One of Us Is Dead centers around an upscale and exclusive salon in Buckhead and the wealthy clients that frequent it. When one wife is replaced with a younger woman, power shifts between the group and each interaction becomes more explosive. Dark secrets are revealed as the women vie to remain relevant.

Caught in the middle of it all is salon owner Jenny, who spends her days taking care of her clients and trying to keep the peace between them. When one of them ends up dead, it’s only Jenny and her collection of town gossip that can help the detective solve the murder.

I was inspired to write One of Us Is Dead while sitting in a salon chair back in my home state of Wisconsin. My hairstylist and I were talking, and she brought up something that I had told her at a previous appointment. I was shocked and said, “Wait, I told you that?” She nodded. I replied, “I can’t believe I told you that.”

Her next words were a lightbulb moment for me. “You wouldn’t believe the things people tell me while sitting in this chair,” she said.

I had been toying around with other book ideas after having written The Perfect Marriage, but this one immediately felt special. I thought a salon was the perfect setting for a thriller, and I knew I had to write it. By the time I got home, I had half of the book plotted in my head, and I hit the ground running.

Creating the cast of characters was tricky, and it took a lot of finessing to ensure they each brought a different perspective to the story. Since there are five points of view, and the timeline switches between past and present, it was so important that each character was unique and had their own voice and quirks to ensure readers could easily tell them apart. A: I always know my endings before I start writing, but that wasn’t the case for this book. I had one in mind but after I wrote it, I found it wasn’t satisfying, so I ended up rewriting it several times with different outcomes as to who was dead and who was the murderer.

I remember spending days covering my kitchen cupboards with post-it notes that outlined the entire story. I kept rearranging and adding and removing them all in an attempt to figure out the “perfect” ending.

Q: What do you think the novel says about wealth?

A: I think the novel says a couple of things about wealth. Money doesn’t solve all your problems, but it can help—as with wealth comes privilege.

A: I write commercial fiction that is meant to entertain. I’ve received hundreds of messages from readers thanking me for writing The Perfect Marriage, because it was a book that they got lost in and made them forget about the things going on in the world around them. I hope One of Us Is Dead provides that level of entertainment and total escape as well.

A: Recently, I turned in my next thriller to my publisher, titled You Shouldn’t Have Come Here, which centers around an Airbnb and a fast romance that’ll surely have an outcome worse than heartbreak. It’s a cautionary tale of what can go wrong when you open up your heart and your home to a total stranger.

I’m also nearly finished drafting a thriller novella titled The House Across the Street, about two families that come together for a dinner party, but each one is harboring a deadly secret that’ll surely be revealed before dessert is even served.

A: An in-person book tour is in the works for One of Us Is Dead, so readers can get updates on that and any other upcoming in-person or virtual events by visiting my website jenevarose.com or connecting with me on Instagram, Facebook, Tiktok, or Twitter.