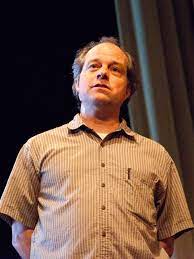 David Liittschwager is a photographer and the creator of the new book Octopus, Seahorse, Jellyfish. His other books include A World in One Cubic Foot. He has worked on many assignments for National Geographic, and he's based in San Francisco.

Q: What inspired you to create this book, and why did you focus on these three creatures?

A: I’d had a minor introduction to all of them while working on something else. The first octopus I photographed was on a project, a survey of a Hawaiian archipelago that extends 200 miles north of Honolulu.

I did another little survey when I spent a few weeks on a NOAA research vessel looking at marine microfauna. I was eavesdropping on scientists and borrowing specimens. That was the second octopus I photographed. I photographed another one that lives in tide pools.

I have to make a living, and take photos people have some use for. People love octopuses.

One thing led to another, and there were three groups of creatures. People have a lot of affection for them already. It’s easy to see how much more amazing they are than we even thought.

There are things I see later when I’m editing. A little tiny jellyfish actually has eyes, weighted eyes. It tells the creature which way is up and down. It knows where to be in the water column, to hide or to go hunting. It’s so small you can’t even see the machinery until you magnify it.

With octopus eyes, a lot of octopuses hunt at night, and their eyes are good in the dark. In the day, their pupils are very small, and they don’t look as interesting as the big eyes humans respond to. I was learning how to make the octopus more comfortable. I’d use a darker light so their pupils would stay open.

With seahorses, I’d use a kreisel tank. It has a circular flow—the flow is not horizontal but vertical. Seahorses tend to find a place in the water column where they’re not touching anything. I learned how to photograph a creature without it running away.

A: There were over 20 locations spread over seven different projects, from Polynesia to Monterey Bay to Hawaii, Japan, Australia, and Portugal.

Q: Were there many differences in the creatures depending on the location?

A: There are only a few species of octopus on the entire West Coast. But I went to one location in the Solomon Islands, and a scientist was able to find 11 of the 12 known species in one spot. It’s a perfect example of why tropical coral reefs are an important spectacle of biological diversity. 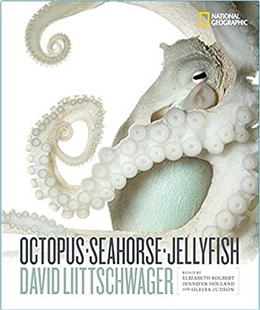 For seahorses, there are under 50 species. They’re spread out all over the world. They’re interesting because they are poor swimmers. They can’t cross open ocean. When they’re born they disperse, sometimes over great distances—they’re holding onto all sorts of things in the open ocean.

With the jellyfish, I got to go to the Kamo Aquarium in Tsuruoka, Japan. It’s a small, quiet municipal aquarium near an agricultural town.

The former director decided that they didn’t have the budget or visitor base to support something really grand, but he wanted it to be spectacular. Japanese people like jellyfish; it has cultural significance. So he decided he wanted to show jellyfish, and they started to collaborate with other institutions. They have 50 percent of jellyfish species on display.

I worked with people at the Smithsonian who study jellyfish, and they provided a specimen of the crystal jellyfish, the only source for green fluorescent protein, a marker in genetic research. It’s an incredibly important tool nowadays.

The amount of economic benefit and well-being humans receive from a single species of jellyfish is incredible. The world is providing us with this sort of thing all the time.

Then I was trying to figure out how to show that in the book. There are facing pages showing the fluorescent on a dark gray background, and then a white background, to show the flowing shapes.

Q: What do you see looking ahead for these sea creatures given global warming, pollution, and other hazards?

A: I do want to read all three essays in the book again and make a list. They enumerate the threats, and it will balloon into a much longer list. It’s a pretty dim view—a terrible, frightening, depressing nightmare.

But we could always live with our heads in the sane and make it worse. Sitting on our hands is even more depressing than the disaster that will befall us.

A: A friend of mine has a daughter who’s in her 30s, and she started an organization called Ocean Music Action. They’re going to put a concert on in Houston to raise money for ocean conservation. She’ll use some of the pictures in the presentation.

It’s fantastic—it will end up as a performance piece, not static pictures on a page.

The economics of the project are large, in terms of what was done to make the book. It’s not commercially viable. It’s subsidized by National Geographic magazine, and there are multiple magazine pieces, a museum exhibit at the Smithsonian, and other projects.

I’m not an evolutionary biologist but I find it totally amazing to have photographed this. I did a job for National Geographic about the Cambrian explosion, where octopuses, seahorses, and jellyfish came from a flurry of new life 450 million years ago.

If you think about seahorses, they’re from the same branch as us, chordates. Just before 450 million years ago, we’re all the same stuff. Then the branch happens. That’s kind of fun—the branches are beautiful.

A: A story about deep sea creatures with scientists.

A: The world is an amazing place. A pregnant male seahorse, a shape-shifting octopus, and a jellyfish that can cleave off a piece of itself to make another are all wondrous. The same thing that made them made me.