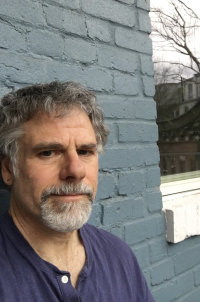 Joshua Weiner is the translator of a new edition of Flight and Metamorphosis, poems by Nelly Sachs (1891-1970). His other books include Berlin Notebook. A poet, he teaches at the University of Maryland, College Park, and he lives in Washington, D.C.

Q: Why did you decide to translate these poems by Nelly Sachs?

A: I’ve been working on the book since 2015, when a friend, the poet and translator, Alexander Booth, put Nelly Sachs into my hands with a copy of The Seeker, one of the two collected volumes that Farrar Straus Giroux brought to publication rather quickly after Sachs won the Nobel Prize for Literature in 1966.

I was in Berlin in 2015 to write about the refugee situation there, that exploded with the war in Syria. I could hear how Sachs’ poems from this particular book, Flight and Metamorphosis, originally published in 1959, was speaking to us now. But the translations from that book were old, not good, or stale; and they were incomplete, as well.

I realized that I had been given a great gift, to be able to try my hand at bringing these amazing poems, of this particular book, into English, in a complete edition for the first time. And that the time was right, that I had to try to do it, that we needed the book now.

There are other reasons, as well, personal reasons, that then aligned with this overall impetus.

Q: In your introduction, you write, “Flight and Metamorphosis marks the culmination of a period in Sachs's development as a poet.” Can you say more about her poetry, and what role this particular collection played in her career?

A: Flight and Metamorphosis marks a dramatic shift in Sachs’ poetry, away from adopting the choral persona of the murdered Jews of the Shoah and towards writing more immediately out of her personal experience as a refugee. 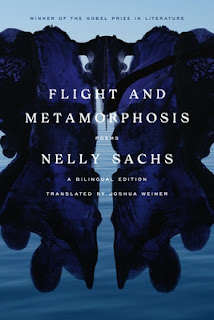 However, the poems don’t narrate that experience in any conventional way. Sachs was drawing heavily from her study of Jewish Kabbalah, to invent a personal vocabulary that was elemental and earthy at the same time as it was spiritual, celestial.

In terms of style, language, and form, the poems of this period are radically open, porous, searching, jagged, darting, intuitive, and, in the context of what’s happening now, again, with refugees out of Ukraine fleeing Russian aggression, entirely lucid and powerfully expressive. For me, this is the poetry by Sachs that’s really exciting and good.

Q: How would you describe Sachs's legacy today?

A: Well, Sachs has had the same legacy for the past 70 years, as a poet of the Holocaust. It’s a terrible legacy because it means, basically, that she’s been trapped in a historical context that limits her. And it’s distorting.

There’s a kind of argument underlying my translation and this new edition of the book that wants to break her free and release her. I wanted to save her from her reputation so she could be the poet that I have come to care about.

A: I hope readers will have a powerful experience reading a book of poems that conveys the experience of flight and transformation in a way that is unique to poetry, and that it instills the kind of intuitive understanding of that experience, of being a refugee, of having lost one’s sense of home, that leads to empathy for others and an awakened wonder to the workings of the cosmos that defies our comprehension.

A: I’m working on a new book of poems!

A: Poetry can’t tell you anything you need to know; it can only put you in a frame of mind that makes you receptive to knowing.