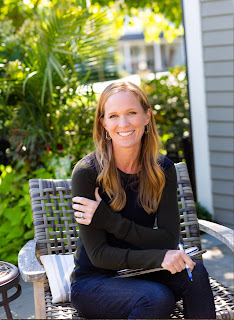 Lowey Bundy Sichol is the author of the new young adult book Idea Makers: 15 Fearless Female Entrepreneurs. She also has written the From an Idea to... series, and is the founder and host of Kids Idea Tank, an idea competition for kids.

Q: What inspired you to write Idea Makers, and how did you choose the entrepreneurs to profile in the book?

A: The concept for Idea Makers came to life back when my first children’s book series called From an Idea to… launched in 2019. My publisher decided to kick off the series with books about four companies kids know and adore: LEGO, Disney, Nike, Google.

And while these are indeed amazing stories, I struggled with the fact that each of these companies was founded by a man and knew how important it was to represent women entrepreneurs. It’s absolutely critical that children see people who look like them in books.

From then on, I was determined to write a children's book that profiled women entrepreneurs.

The first story that jumped out at me was Kathleen King’s story about building Tate’s Bake Shop. It’s literally jaw-dropping. I interviewed Kathleen and my agent pitched this book idea to a new publisher – Chicago Review Press.

It was actually this publisher's idea to add 14 more stories for Idea Makers: 15 Fearless Female Entrepreneurs.

I spent the next few weeks doing research, looking for startup stories of women in different industries, from different backgrounds, cultures, and ethnicities, keeping in mind that children – girls in particular – need to see people who look like them in business and entrepreneurship!

Q: How did you research their lives, and can you share anything you learned that especially surprised you?

A: In all of my books, I use publicly-sourced information so this could be information from past articles, books, interviews, or company reports.

I was also lucky to interview seven of the 15 women featured in Idea Makers and was touched by how much they opened up about their childhood as well as how these experiences impacted who they are today.

One thing that surprised me was how many of these women went through extremely hard times as a child. Some were bullied terribly, some were told they were dumb or different, some struggled financially, and some even experienced the death of person close to them at a young age. 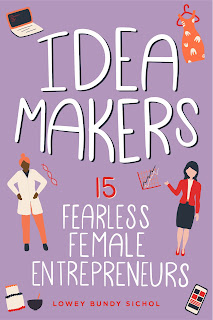 But what’s incredible and something they all shared was the ability to persevere through even the most challenging of times.

Q: The Kirkus Review of the book says, “The author concludes by encouraging her readers to act on their own ideas because passion and hard work can pay off.” What do you hope your readers take away from the book?

A: I hope that Idea Makers inspires readers – regardless of their age or gender – to stop for a moment and consider the validity in their ideas, especially if they revolve around their passion.

My hope is that when these readers do have an idea, as crazy as others may tell them it is, they now recognize that it is possible to create a company that can change the world around it.

Q: Are there similar themes you see running through the lives of the 15 women in your book?

A: Absolutely, these women are BRAVE through and through. Throughout their life, they have often been the only woman in the room, the only person of color in the room, and the only entrepreneur in the room. They stand up for their ideas, their passion, and they persevere through the hard times.

I am in awe of all of them and grateful that I am the one sharing their stories to a whole new generation.

A: I have a picture book coming out next year, which I co-wrote with Kathleen King, the founder of Tate’s Bake Shop. It’s a fun, clever, wonderful entrepreneurial read for the little ones!

I’m also working on a new book series that shares more start-up stories of companies in industries that kids love – video games, candy, and sneakers to name a few! My hope is to also write a book about nonprofits for kids.

A: Many people wonder why I write entrepreneurship books for kids. Prior to writing children’s books, I founded an MBA writing company, which produced MBA case studies for some of the top business schools in the world.

For 14 years my case studies taught the brightest MBA students in the world. Throughout those 14 years, I often asked myself why we wait until business school to share these startup stories and teach people about entrepreneurship.

Especially considering approximately 20 percent of working adults in the United States are entrepreneurs! Surely kids want to know how Nike, Disney, and LEGO came to be. Turns out, they do!

All of my books are written with an MBA mindset, but for children and young adults. The stories are awe-inspiring and educational for anyone who ever had a great idea and wondered what to do with it.