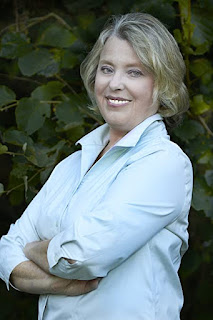 Linda Dahl is the author of the new novel An Upside-Down Sky. Her other books include Morning Glory. She lives in New York City.

Q: What inspired you to write An Upside-Down Sky, and how did you create your character Lidia?

A: When I started writing, I was a travel journalist focusing on offbeat places, so I’ve seen some pretty strange things.

When I went to Burma, a.k.a. Myanmar, several years ago, I was captivated: you couldn’t turn around without bumping into yet another beautiful pagoda crowded with serene Buddhist monks and nuns in their respective red and pink robes.

At the same time, Burma had just emerged from decades of a brutal dictatorship and fierce pockets of ethnic fighting persisted. Plus, it was one of the world’s most flourishing drug and gun trafficking markets. How and why could these extremes co-exist? I was hooked.

I decided to write about a group of Americans traveling there with little in common besides being on a tour in enforced intimacy every day. As they tripped through a fictionalized Burma I called Namyan, their interactions, adventures and misadventures emerged.

And the protagonist, Lidia, asserted herself right away. She is a mature woman who identifies as Latinx, but is also half Irish American. An artist who has painter’s block. A woman who others take to be a widow, and yet there is something about her private life. I won’t give away the ending. 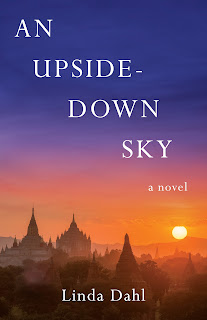 Q: How important is setting to you in your work?

A: Setting is crucial to me. It shapes the narratives and the characters and takes on a character of its own.

My first novel, Gringa in a Strange Land, takes place in the Yucatan peninsula, and the hot, languid, Mayan-tinged culture of the peninsula has a powerful effect on the narrative. As does the crumbling infrastructure of Manhattan in the 1970s and ‘80s in Cleans Up Nicely.

Now in Sky, the Southeast Asian setting is as exotic and inscrutably complex a place as it gets.

A: Michael Ondaatje, author of The English Patient, once said that his novels are inspired by “a little keyhole of an image.” I’m an instinctive writer too.

Sky began with an image of long lines of Namyanese peasants patiently waiting under a broiling sun to see a (purported) relic of the Buddha, a toe bone housed in a golden case in a golden pagoda. Then, the fussy, funny 18 tourists and their stalwart, beautiful Namyanese guide appeared.

Although this was the first chapter I wrote, it got moved up as the internal logic of the book – in fits and starts – took shape.

A: The best review I ever had was: “I couldn’t put it down.” I hope that in Sky, readers will find an absorbing story about a little-known, alluring ancient country that for much of the later 20th century, was closed off to the world, a pariah state. And though it’s a serious book, I hope they will find it funny at times.

A: I’ve written a screenplay adaptation of my biography of a great female Black jazz pianist and composer, Mary Lou Williams, which is currently being considered for production. So, fingers crossed. And I’m working on a new novel, about four siblings who decide to go on one last family reunion. It’s a wild ride for them.

A: Just weeks after An Upside-Down Sky went into print, violent repression of the infant democracy in Burma was imposed by the military. For tourists, it’s a no-go again. But for the Burmese people, it has been a call to civil war. Having tasted basic freedoms, they are determined to fight for them.