Susan R. Dixon is the author, with the late Mark M. Smith, of the book Seeking Quan Am: A Dual Memoir of War & Vietnam. Dixon is a writer, editor, museum curator, and teacher. She lives in Ithaca, New York.

Q: Why did you and Mark Smith decide to write this book?

A: We never actually decided to write this particular book. I think the book decided to be written.

The process began when Mark enlisted my help in writing about his two tours with the First Air Cavalry in Vietnam.

But I had only seen the war on television. The world he wrote about was completely foreign to me, which meant I had to ask constant questions, learn about military terminology, weapons and ordnance, geography and place names. And I had to do all this while remembering that this was his story, not mine.

Then I began to trace the path by which I had learned about war and the experiences in my life that might have led me to be open to such a project as this.

Over time Mark and I learned to share our very different experiences and to respect each other's perspective, even if we did not agree with it. (It helped that Mark had become an active member of Vietnam Veterans Against the War after his return.)

The more we talked, the more I saw the very process we were engaged in as part of the story. So nothing about the book was planned from the beginning. The book grew and became urgent as we lived it.

A: Choosing a title was quite a challenge. Any title was going to have to make room for vastly different experiences, both to contain them and to find what united them.

Different as we were, Mark and I both knew on some level that we would not be able to go beyond "this was a peak experience that happened to me when I was young" without learning from Vietnam.

Quan Am is the Vietnamese bodhisattva of compassion. The numerous statues of her in Vietnam - an enormous one stands on a mountain overlooking the harbor at Danang - show her pouring out the waters of compassion over a world that continually needs it.

To me, to seek Quan Am is to learn to face the pain of the world and find compassion within it. 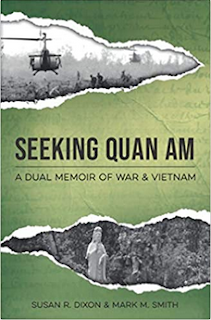 Q: Iraq War veteran and editor Kevin Basl said of the book, "Seeking Quan Am opens passageways between different worlds. It connects the lives of war veterans and civilians, Americans and Vietnamese, past and present." What do you think of that description?

A: I love that description because it encapsulates the many creative tensions in the book. I constantly tried to balance "war veterans and civilians, Americans and Vietnamese, past and present."

I love that he says "opens passageways." The book has no resolution. That is intentional. Questions of war and compassion, alienation and connection are never fully resolved in this life, much as we might wish them to be.

The important thing is to reach for them and to know that we don't have to do that searching alone. We come the closest to resolution when we try to connect what seem to be opposites. (Kevin, by the way, is Mark's voice for the audiobook.)

A: When Mark gave me his notes he asked me to "make some sense of them." He meant sort them out, put them in order, but his words became a kind of mission statement for the book. What he really wanted was for me to make some sense of what happened. That is impossible, of course, but we tried.

Mark was closely involved in all stages of the book, although a stroke he suffered in 2011 prevented him from doing any writing. I have thousands of email messages and notebooks filled with notes from our conversations. The challenge was to distill it all into a form that would make sense to readers.

Mark died in October of 2020. I am so very grateful he was able to see the book completed.

A: Besides continuing to work on issues raised in Seeking Quan Am, I am writing a novel about a mystery I discovered while doing my dissertation research on a 12th century monastery in southwestern France. That book is about stone and women and secrets and ghosts. The working title is Holy Water.

A: Some of the material that could not be put into Seeking Quan Am is on the website - www.seekingquanam.com. There are maps there and photographs, and even a playlist of music.

Also, the pandemic shut down plans I had had for promoting the book but it also opened up new possibilities. I have hosted online readings and discussions that included people living in multiple time zones. I am available for book clubs or study groups.