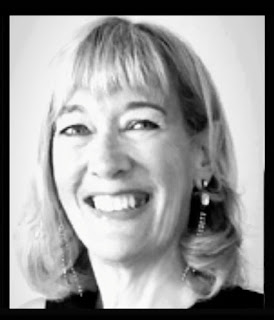 Marcia Stewart is the editor, with Teri Rizvi, of the new book Sisters!: Bonded by Love and Laughter. The book is dedicated to Stewart's late sister Nickie. Stewart has spent 30 years in the publishing industry.

Q: How would you describe your relationship with your late sister Nickie?

A: In a word--fantastic! Nickie and I were only a year apart and we were inseparable as kids, sharing a bedroom and spending countless hours together—playing games, making snowmen, riding bikes, and sharing our deepest secrets, such as our latest crushes.

Of course, like all sisters, we fought over minor things, such as who “borrowed” the other’s hairbrush without asking.

Nickie and I remained close our entire lives, even when we lived across the country from each other and only got together a few times a year. We talked several times a week and continued to share our deepest secrets.

The expression “she always has my back” definitely conveys how I felt about Nickie. I could always count on her love and support.

One of the best things about my little sister was her playful and exuberant spirit. No one could make me laugh like Nickie did.

She told (and wrote) hilarious stories about the most mundane events, such as getting her eyebrows waxed or dealing with an overly chatty co-worker.

Nickie only shared these funny pieces with family and friends,  but dreamed of focusing on her humor writing at some point. Sadly, that day never came, because Nickie was diagnosed with terminal lung cancer in 2018 and died just eight weeks later.

Q: How did you and Teri Rizvi end up working together on this book?

A: After Nickie died, I was determined to do something that honored her memory and love of humor writing—ideally, something that would provide an opportunity for aspiring humor writers, like Nickie. I explored a variety of options, such as developing a one-day workshop for humor writers with a local bookstore.

Happily, I came across the Erma Bombeck Writers’ Workshop when I Googled “humor writing workshop.” I knew who Erma Bombeck was (a favorite of my mother’s), but I didn’t know anything about the workshop.

I sent a short email, saying that I wanted to do something to honor my sister’s memory, and was interested in discussing possibilities of working together. Happily, the workshop’s creative and dedicated director, Teri Rizvi, responded to my email and we set up a time to talk.

After discussing various options, we settled on developing a writing competition—Nickie’s Prize for Humor Writing, which eventually led to the book, Sisters! Bonded by Love and Laughter. I know Nickie would be as thrilled with the results of this partnership as I am.

Q: How did you choose the selections to include, and the order in which they'd appear?

A: We started with the essays (1,000 words each) written by the 21 winners of Nickie’s Prize for Humor Writing.

This wasn’t enough for a whole book, so Teri and I started asking well-known writers and humorists to submit an original funny sister story or do an interview. Nearly everyone agreed—from Peggy Rowe and Adriana Trigiani to Alan Zweibel and Laraine Newman to Carol Saline and Deborah Tannen. 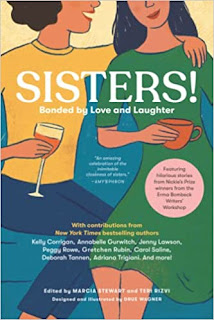 I then found and secured reprint rights  for funny and heartwarming sisters’ pieces we could include in the book, such as Vanity Fair Q&As with famous sisters such as Mary and Stella McCartney; blog posts, including a piece Gretchen Rubin wrote about her sister; and song lyrics, such as Carly Simon’s “Older Sister.”

Finally, I included one of the humorous stories Nickie wrote me, about a particularly memorable Halloween.

All in all, there are 60 different voices in Sisters! from both original and reprinted stories and interviews.

To fill out the book, I wrote a bunch of fun filler material, such as a quiz on how well you know your sister and compiled trivia, such as popular sisters on TV shows. I then peppered the book with quotes about sisters—from Lady Gaga to Toni Morrison.

In terms of how all this material was organized, we did it by theme.

It just worked out that all the pieces naturally fell into one of 10 different themes, which are the chapter titles, such as “Sisterly Pecking Order” (funny stories centered around the lengths younger sisters will take to win their older sister’s favor), and “Do You Remember When….” (essays that focused on memorable childhood events that sisters reminisce and laugh about for years).

Many of the entries for Nickie’s Prize were written about a non-biological sister, someone that the writer considered a “sister of the heart,” so we included that as a chapter/theme, too.

Finally, I worked with a talented book designer, Drue Wagner, who brought all the themes to life with her whimsical illustrations and creative design that made Sisters! even more fun to read.

A: I want readers to laugh and be entertained, something we need more than ever these days.

And I want people to appreciate the special bond and sense of humor that the best of sisters share and do what it takes to stay connected—whether in person, or by phone, email, text, or the forgotten art of letter writing.

The Book Club Guide in the back of Sisters! is a great way for readers to talk about their relationship with their sisters, good and bad.

Finally, for aspiring writers, like many of the Nickie’s Prize winners, I want people to read the book and take a chance and pitch their story or enter a writing contest. You never know—it may end up in a book like Sisters!

A: A few years ago, I put together a funny ABC book for seniors with my 90-year old mother. It still needs a lot of work, balancing a humorous approach to sensitive topics of aging, but I think it has potential.

A: I want to encourage all writers to check out the Erma Bombeck Writers’ Workshop, which will be held October 20-22 in Dayton, Ohio, with panels and workshops by bestselling authors, humorists, and publishing experts. A virtual option is also available for what has been rightly called the “Woodstock of Humor.”