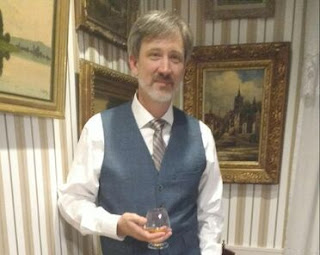 Eric D. Goodman is the author of the new novel Wrecks and Ruins. His other books include the novel The Color of Jadeite. He lives in Maryland.

Q: You note that Wrecks and Ruins was inspired by a story you wrote that was published back in 2008 called “Cicadas.” Did you decide to revisit your characters because the cicadas were back in Maryland last summer?

A: Yes, the return of Brood X certainly had a hand in it.

There were a few things that merged with the development and writing of Wrecks and Ruins.

It began when I decided to challenge myself by entering a three-day novel contest—during which I was to write the first draft of a short novel in 3 days. (Don’t worry—rewrites and editing took much, much longer!)

After coming off of writing my first thriller, The Color of Jadeite, I knew I needed to write something less intricately outlined; something that would rely more on character exploration than plot.

I keep both paper and electronic “idea files” with short treatments for story and novel ideas as I come up with them, so I referred to those files for an idea of what I could tackle. One item was something I’d tentatively called “Divorce Courting,” about a middle-aged couple deciding to let one another go, only to eventually come back together.

Something I often do when planning for a new novel is to see if any characters or side characters from previous writings can fit in. I think I picked that up when writing Tracks: A Novel in Stories, which had a number of intermingled characters.

I realized that Stu, from my story “Cicadas,” was a perfect fit both in his attitude, personality, and timeframe. Then I realized it was even more ideal because the story had taken place in his youth, the last time the cicadas had emerged, and back then he’d even contemplated how things would be the next time they came.

And they were about to emerge again.

Q: How would you describe the relationship between your characters Stu and Tiffany?

A: It’s complicated. In part, because of Stu’s attitude, and his fear that relationships are destined to break apart. He relates romantic love to the cycle of the cicadas—lots of excitement for a brief time, then years of monotony.

At the end of the story “Cicadas,” Stu watches his friends marry off and begins to wonder whether they are right—whether he should continue to jump from casual relationship to casual relationship, or consider settling down. That’s a sort of open-ending for the story.

In the book, after years of marriage, Stu and Tiffany still love each other, but they’re not in love. That romantic buzz has dulled to a purr. At least, that is what they think until they spend some time apart.

A: My original thought was to call the book “Cicadas.” But as I developed the older version of Stu for the book, something new came about: his fascination with broken things. He sees beauty and art in the remnants of car wrecks and rowhouse shells in the same way that vacationers might find in ancient ruins of Rome or Athens. 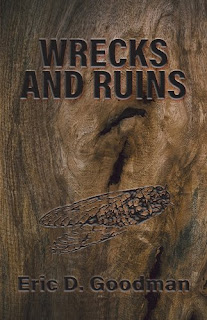 Stu’s work as an insurance adjuster, who sometimes must visit the sites of wrecks and disasters, helps provide ample opportunity for him to collect artifacts and take photographs. This fixation on broken things carries over into his relationships—including with Tiffany.

A: I think people today tend to idealize what a relationship is supposed to be. Our instant-gratification, stream-it-now, post-and-like mentality, coupled with images of what we “deserve” in a mate perpetuated in movies, shows, magazines, and on social media, give people the impression that if things aren’t absolutely perfect, they should end it and look for that perfection.

But relationships aren’t about getting everything you want. They’re joy and sadness, pleasure and pain, compromise, and work along with the play.

Working at a relationship—whether a marriage, friendship, or professional one—does not mean you’re “settling” for good enough. It means you’re being an adult and a realist and being part of the effort. We should all do our part to make meaningful relationships work.

That, and I hope readers are entertained and enjoy the read.

A: I’ll have to admit, during the two-plus years of the pandemic, I’ve found less time and motivation to write instead of more. It sounds backwards, but I think other things have just gotten in the way and kept me busy. So I’m sort of between books right now, not actively writing a novel.

But I have been dabbling in poetry during the pandemic, writing verse in fits of inspiration now and then.

I have a few novel ideas I’m fleshing out and I’ll probably start working on one of them later this year. One is set in 1990s Russia, another is a holiday story, and I’m thinking about a follow up to my thriller.

But it’s possible my next book that sees the light of day could be a collection of poetry. That would be a first for me.

A: Some readers will recognize real places in Wrecks and Ruins. I like to set scenes in recognizable places, to ground scenes in reality but also to provide additional “aha” moments for readers who know those places. There are scenes in this novel in Baltimore, Las Vegas, Annapolis, Virginia, Bryce Canyon, and even Vilnius.

I also set some scenes in specific moments, such as concerts when they really happened, election cycles, and cicada cycles. The 17-year cicadas serve as a metaphor and a marker of the passage of time. That—and COVID—actually caused some challenges in my rewrites since I needed to make sure the times and places of concerts and election cycles and masks and sheltering in place were all accurate.

Wrecks and Ruins is being published by Loyola University’s Apprentice House Press on April 19, 2022. You can get a taste by listening an abridged version of “Cicadas” read on Baltimore’s NPR station, WYPR: https://yourlisten.com/edgewriter/cicadas

Wrecks and Ruins is available for pre-order: