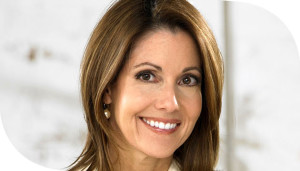 Cynthia Good is the author of the new poetry collection What We Do with Our Hands. An entrepreneur and journalist, she is the creator of LittlePinkBook.com, an events resource for women leaders. She lives in Atlanta.

Q: How was your new poetry collection's title (also the title of one of the poems) chosen, and what does it signify for you?

A: The title of What We Do with Our Hands resonated after looking at this collection of poems and noticing the theme throughout and the metaphorical significance of hands; the physical work we do gardening, cleaning a barn, raising children, burying a loved one, covering our heads to protect ourselves from things falling from the sky, and pulling ourselves back up, extending a hand to someone we love, a hand in marriage, and that we have a hand in everything that happens to us and those we touch.

It also correlates with the black-and-white photograph on the book cover: a woman crouched beneath a mountain of boulders. These are the rocks on Pedregal Beach where I live in Cabo San Lucas, Mexico.

From the poem with the book’s title:

...When morning purples the low mountains // from grey clouds in a swath, it’s like that moment / before a storm, the sky hovering like a truce.

A: The idea was to have the poems speak to each other and build some momentum rather than simply including them in chronological order. 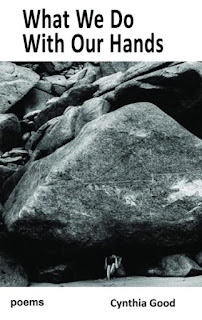 Q: What do you see as the role of grief in your poems?

A: For sure the theme of grief is woven throughout the collection. The persona wrestles not only with losing a long and treasured marriage and her parents’ deaths, but also with the idea of how she thought life was supposed to be.

The persona finally gives up the fantasy of what she believed was through and through, a happy marriage, and in doing so mourns the loss of her illusion and the dream of what she thought she wanted most, as well as her identity as it was throughout the marriage.

She then turns to the difficult task of rediscovering who she is now, and searching a place for herself in the world; essentially starting over, relearning how to support herself, how to take care of herself and love herself again.

The blank page has been a place to somehow organize a life spinning out of control. While the act of writing can be healing and provide clarity sometimes, it’s also difficult since it requires digging deeper behind, and into the wound to uncover what’s beneath it.

Excerpt from the poem "New Year’s Day": so long / to saying thank you to taxi doors / held open, only to slide across sticky seats /...So long Mom. And maple leaves fluttering up / and painting the ground red with stars. / So long … to thinking I was lucky for so long.

A: A full-length manuscript entitled In the Thaw of Day, which is being shopped around, while I continue to write and new themes emerge.

A: About the writing process: None of these poems was written with the objective of empowering women, or as a means to achieve some other particular end. However, if someone has been inspired or felt supported by these poems, I am very happy to hear this.

I write when I’m afraid. I write when my stomach flips over and I don’t know why or what else to do, when I’m torn apart and ashamed; not to find an answer or solution but in an attempt to release what is trapped inside me, and maybe to understand it a little better.

I wake up early most mornings and ideally will read a bit then write for a half hour or so. This is the time of day when I feel best so I save it for what’s most important. I can answer emails and do my work-work later.

Place figures prominently and has much influence on these poems. They were written in Mexico, New York City, Atlanta and Paris.

Excerpt: Fruit gleams under // the lit green awning. Pigeons flutter / too low between buildings // as the waiter clears bistro tables / of fig jam and half-eaten croissants. // Voices at the café circle like cigarette // smoke. Don’t objectify me. Please // objectify me, here in the bone / cold scent of piss on Rue Jacob.