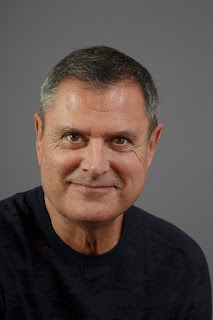 Grégoire Halbout is the author of the new book Hollywood Screwball Comedy 1934-1945: Sex, Love, and Democratic Ideals. He is associate professor of English and cinema at the University of Tours, France.

A : When one embarks on a study of a film "genre", and especially a Hollywood one, the main question is to try to understand how it emerges and why it succeeds in resonating with audiences. This is what is fascinating.

Therefore, one needs to carefully examine the period in which screwball comedy flourished to identify the historical and social contexts associated with it. Because films are triggered by political and social material along with the intimate agenda of the public.

And the success of screwball movie comedies is framed by two crucial periods in the history of the United States: the Great Depression and the Second World War.

In the 1930s the politico-economic system was close to exploding and the end of the war signaled a return to order, to growth and more conservative values. Throughout the decade, the stories of encounters, marriages, separations and reconciliations emerged as a way of questioning the democratic ethos.

Then, with the war effort, during which Hollywood was put under much strain, the representation of intimacy was cast aside. There was a shift in the centers of interest and the expectations of the public.

And though comedies included representations of the war in their pilots from as early as 1942, the context of war made the discussion of equality among married couples less urgent.

The fact is that there were far fewer comedies produced in Hollywood in those years. And the actors who specialized in the genre were approaching their 40s and were no longer “suitable” for romantic roles.

As a result, focusing on a broader period allows one to study an expansive corpus with permeable boundaries in flux throughout the years, bridging the effects of the 1929 American stock market crash and the Allied victory in 1945.

In the years following the generalization of the Depression, the importance of the social origin of the protagonists is key. Screwball comedy solves the question of social differences through the magic of love, which allows for social mixing. Over the years, the social discourse centers on married life and the conversation of happy marriages based on happy sex.

So, the 10-year period under consideration allows one to account for three essential factors that explain the appearance and success of screwball comedy, as I discuss in the first part of the book. The economic crisis that turns everything upside down: social roles and marital roles.

Second, American society is stirred by a massive aspiration for personal well-being; marital happiness is considered differently as based on the fulfillment of both partners.

Then, from 1934 onwards, the Hollywood institutional context created the conditions for a tense, electric, and passionate discourse all based on innuendo, because of the Hays Code regulations that forbade the mention or show of desire and its satisfaction. I examine how an inappropriate and untimely limitation was turned into an asset.

Q : How would you define "screwball comedy," and what would you say is a perfect example of the genre?

A : Categorization and labeling —this is what allows film genres to be identified by audiences and producers to manage their expectations. It was the press that first used the word “screwball” in 1935 to designate actress Carole Lombard’s acting and stories of scatterbrained heroines (My Man Godfrey).

I explain at the beginning of the book the origins of the word, which in fact expresses the idea of being off-axis, out of the norm, out of the expected trajectory, therefore eccentric. This is what screwball is all about.

Defying social norms, falling in love with the butler (My Man Godfrey), investigating a murder in a little girl's costume (The Mad Miss Manton), not being able to consummate a marriage because the husband is afraid of his father (Vivacious Lady), a wife leaving her husband because he is a great lover but a poor breadwinner (The Palm Beach Story).

As Stanley Cavell has shown throughout his work, it is the wildly funny eccentricity of the romantic pair that makes for a screwball comedy.

More seriously, screwball comedy is the fantasy representation of successful sexual intercourse. This bliss is the result of an obstacle course: an encounter in the form of (physical) shock, love and desire at first sight, which are expressed by a verbal and physical fights until the end. And words, verbal jousting, fierce negotiations on the terms of living together.

It spans from the expression of sexual gratification to the acceptance of alterity.

The "perfect example"? We enter there in this grey area where film analysis, personal taste, and box office results are all blended. Especially since the corpus of films studied tries to avoid the auteurist approach and includes "minor" works.

I would cite Garson Kanin's My Favorite Wife (1940) as a perfect example of the genre. This is not one that is spontaneously cited. Three great actors who masterfully embody the ménage à trois (Irene Dunne, Cary Grant, and Randolph Scott), the moods of a sexually ambiguous husband (Grant), an adulterous wife (Dunne) who goes at her husband by setting the conditions of marriage, and lots of chase, comedy of errors, cross dressing and pratfalls.

It's a script that the Hays Office censored heavily and (as a result?) it is a marvel of innuendo and ellipsis.

Q : Which actors are particularly identified with this type of film?

A : It kills me to have to limit my answer to only a few actors because they all contributed to establishing this genre. If I had to choose, however, I would say: Cary Grant, Katharine Hepburn, Carole Lombard and Claudette Colbert. Their personas served as exemplars for the genre during their prime and are still relevant today.

Grant runs through the entire genre and its remakes until the early 1960s. He has this acrobatic elasticity, the darkness of a troubled psyche, the procrastination of the child husband.

Colbert is the gold-digger, the adventurer, who knows how to get out of desperate situations.

Lombard brings to the genre the burlesque of the silent film and helps to bring the comic “responsibility” to the leading character.

As for Katharine Hepburn, she embodies "the intelligent actress" as director George Stevens put it. I talk about it quite a bit in the third part of the book, focusing on the screwball party and the adequacy between a generation of actors and this so typically American genre.

And then I realize that I forgot Irene Dunne, superstar of her time, who can play anything and contributed to set the standards of screwball comedy with Cary Grant in The Awful Truth.

They all brought this modernity of play and this impression, that we still feel today, that they are inventing what is happening, right there on the spot.

There is also an intimate relationship between the spectator and the actors and the adhesion to what they project and to their persona. 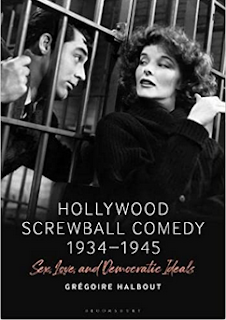 Take the cover photo of the book. Some heated debates went on about it. We had an "old-fashioned" project with Jean Arthur standing and facing her two husbands in bed (Too Many Husbands), in an old-fashioned setting, with 1940s style. It was a perfect illustration of screwball scandal. But something was missing for a book cover.

The final choice shows Cary Grant behind bars facing a sarcastic, dominant Katharine Hepburn, who looks down at him. The chiaroscuro is modern, the low angle is disconcertingly modern, the haircuts are modern, the chemistry between the two is modern.

To come back to your previous question, the "perfect screwball comedy" is always the one that seems closest to us, as we speak.

Q : What is the legacy today of these screwball comedies, and are there any modern films that are similar?

A : I try to show in the book how they responded to the aspirations of an era. That age is over but a film genre, or any mainstream content, never dies. There is a permanent recycling of codes and stories. Screwball comedy has set the standards of romantic comedy for decades to come. They still prevail today.

There were certainly periods like 1945-1960 that were much more conservative, when “family comedies” were predominant. However, American directors have always known their classics inside out and have always made nods to screwball.

The homage to screwball comedy already started with Tony Curtis’ parody of Cary Grant in Some Like It Hot (Wilder, 1959) when he played a man besieged by a straightforward Marilyn Monroe. Or with Douglas Sirk, who took up the theme of unconsummated marriage in No Room for the Groom (1952).

The 1990s saw the proliferation of many remakes (Pretty Woman), often with the representation of a woman of modest origin who becomes a career woman (Working Girl). The series also took up the screwball tone and the love confrontation (Moonlighting, 1985-1989; Gilmore Girls, 2000-2007).

The Coen brothers and Wes Anderson, in a more auteurist approach, have used screwball humor, eccentricity, role reversal, and the cult of the absurd. We should also not forget Judd Apatow and his "frat pack".

But more than anything else, it is the question of "remarriage" that persists. This permanent negotiation on the organization of living together: should we have children? Should we recognize differences in others? And what about the career competition between both persons in the couple? And the fear of commitment?

The idea that intimacy is political remains contemporary. Love must be publicly recognized because romantic conversation is a "battleground" for democracy. This is my conclusion when I quote the recently released Netflix romcom (Love, Guaranteed, 2020).

Having said that, there is a tendency towards hyper-expressivity, provocation and the display of bodies among the female characters in contemporary romcoms (Intolerable Cruelty, Bridesmaids, the series Girls).

In these romcoms, female characters harness the power of comedy to deliver a kind of bold and uncensored discourse on their sexuality at a time where the social position of men and women is radicalized.

A : When looking into screwball stories, I realized that the world of the press is a prominent source of plots and characterization, through an overwhelming presence of front pages that serve for narrative punctuations and enhancement for film plots.

I am now investigating the relationship between the Hollywood industry and news media in the classical period (1930-1960). I am interested to find out if the complex power struggle between the media and the studios during these three decades was driven by Hollywood’s desire to get the best coverage of its films, or by news media possibly influencing film contents.

I am also working on a book on gay intimacy in recent international cinema and series (Andrew Haigh, Andrew Ahn, Alain Guiraudie…).

A : Film buffs will appreciate the many subtle and obvious references made to classic films within screwball comedies.

The tailor sequence in Once Upon a Honeymoon (with Cary Grant and Ginger Rogers, 1942), which is a marvel of indecency, is a direct quote from Chaplin's The Count (1916).

The final make-up scene in When Harry Met Sally (with Billy Crystal and Meg Ryan, 1989) is an exact replica of the one in Bachelor Mother (with David Niven and Ginger Rogers, 1939) where they kiss in the middle of the crowd on New Year's Eve.

And one last thing: the beauty of black and white images. That's what we tried to capture with the many illustrations in the book.