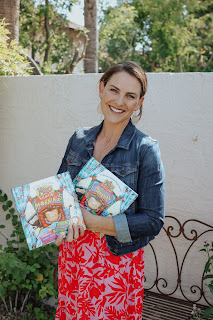 Sasha Graham is the author of the new children's picture book Whitney Wins Everything. It's the second in her Tiny Ninja series, which began with Milo Does Not Like Mornings. A former Walt Disney Studios executive, she lives in Arizona.

Q: Whitney Wins Everything is the second in your Tiny Ninja series--how did you come up with the idea for the series overall, and for your character Whitney?

A: My boys were 3 and 5 when they nicknamed their little sister “Tiny Ninja” before she was even born. They loved the Three Ninjas movies from the ‘80s and they were eager to add their new sister to their crime-fighting team.

I heard once that as adults when we look back on our childhoods and see something that gave us trouble we sometimes “build time machines” in an effort to go back in time and improve things for our younger selves.

We can’t, of course, actually go back in time, so the way we do this is by helping a younger version of ourselves. Someone who couldn’t afford college may start a scholarship fund; a professional skateboarder whose family had trouble making ends meet may pay to send kids to skate camp.

For me, I wanted kids to have the confidence to trust their own inner voice in a way that I never had and I wanted to personify this inner voice in something quiet, strong, and brave. When I remembered my boys calling my daughter “Tiny Ninja” it all just slipped into place.

Whitney, the title character in Whitney Wins Everything, may be a teensy bit autobiographical. I have always been an athlete and have lived by the motto that it’s always fun to play, but it’s even more fun to play when you win.

As Whitney’s story evolved, though, it became about something much bigger. When we look around it’s easy to see examples of people everywhere putting “me” before “we.” Children’s books offer such a wonderful opportunity to simplify a complicated concept.

In this case, the concept is discovering the life-changing magic of being part of a team. Whitney realizes that the way she has always done things no longer serves her and that the emotional return she gets from winning on her own isn’t enough compared to what it’s costing her.

When she listens to her own Tiny Ninja she understands that the only person whose behavior she can change is her own and it isn’t easy, but the payoff definitely makes it worth it.

Q: What do you think Angelina Valieva's illustrations add to the story?

A: Tiny Ninja stories without Angelina’s illustrations would be like a glass of water without the glass.

Angelina is a marvel and her illustrations make my stories sing. Her ability to convey emotion in the Tiny Ninja characters is extraordinary and her use of color adds joy and vibrancy that really bring the books to life. 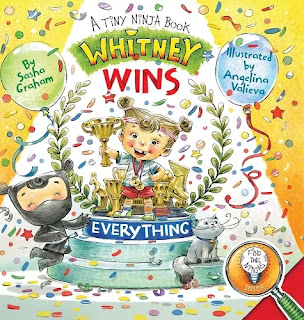 In a great example of our collaboration, I had originally asked Angelina to include one hidden Tiny Ninja in each illustration and she came back with the incredible idea of including several Tiny Ninja “Seek & Finds” in each book instead. They’ve become synonymous with the books and are a fan favorite!

A: First and foremost, I want readers to have fun. Whitney is a firecracker and I hope readers fall in love with her and her ferocious passion for competition.

Second, I would love for readers to take away that we all have it in us to change course when we realize that the way we’ve always done something isn’t working anymore. Too often we just keep doing things out of habit even when they are no longer making us happy.

In Whitney’s case, her Tiny Ninja helps her realize that she doesn’t need to give up the thing she loves, which is winning, but that there’s a way to do it that is going to bring her a whole lot more joy.

A: Strangely, perhaps, a lot of my inspiration for writing children’s books came from movies. When I was with Walt Disney Studios I worked closely with Pixar on the publicity campaigns for Finding Nemo, Monsters, Inc., and The Incredibles.

Around this same time, I worked on the U.S. release of the English version of Hayao Miyazaki’s Studio Ghibli movie, Spirited Away. Miyazaki’s movies are absolutely gorgeous and creative in a just mind-blowing way, but again, they are all rooted in incredible storytelling.

These movies, and their creators’ emphasis on story in the midst of the massive film industry, really inspired me as a children’s book writer. I love crafting characters and their worlds in my imagination and then watching Angelina bring them to life with her art.

A: At the moment I am working on a new Tiny Ninja story called Clara Can’t Compare. I began this story with the idea that “comparison is the thief of joy,” but in my research I’ve discovered that comparison can actually be really positive and motivating, provided we compare ourselves to people whose abilities are within reach. I love when an idea I thought I understood gets turned on its head!

A: Whitney Wins Everything and Milo Does Not Like Mornings are both available on bookshop.org (where your purchase will benefit your local bookstore) and pretty much anywhere else you like to buy your books online!

I love connecting with people on Facebook and Instagram, @TinyNinjaBooks, and seeing what everyone is up to!