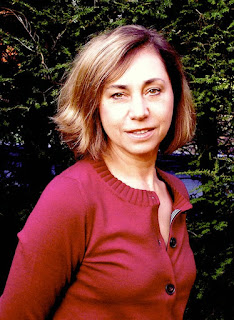 Elena Gorokhova is the author of the new novel A Train to Moscow. Her other books include the memoir Russian Tattoo, and her work has appeared in a variety of publications, including The New York Times and The Daily Beast. Born in Russia, she lives in New Jersey.

Q: In our previous interview, back in 2015, you described this book as “a memoir (novel?) based on my sister’s life. She was born during WWII, grew up in a small town in central Russia, and became a prominent stage, film, and radio actress.” Why did you decide to write the book as a novel rather than a memoir, and how did you create your character Sasha?

A: I began working on a book based on my sister’s story when I finished my second memoir, Russian Tattoo. By then, I guess, I felt that I had exposed every detail in my Russian and, subsequently, my American life, and the only possible direction seemed toward a fictional reality.

My older sister Marina, trained in the best drama school in Moscow, became a prominent character actress in a Leningrad repertory theater in the 1960s, just like the narrator of A Train to Moscow, Sasha.

From conversations with my sister, I know what went into that rigorous training: from silent improvisations of everyday routines, to Stanislavsky-inspired etudes, to full productions of classical plays.

I spent my teenage years in the wings of my sister’s theater, breathing in the air of art and magic and pretending that I, too, could be an actress. I couldn’t.

But that theater, with all its makeup, costumes, and posters, belonged as much to me as it did to her. Like an actor, I knew I needed to remember every detail of that theater to file the images onto the lower shelf of my heart and use them later in my writing.

My sister, just like Sasha, was born in 1942, so the time of the novel’s postwar shortages – both of food and men – is burned into her memory. It was also the time of grief and fear. The time of Stalin’s purges and Gulag labor camps.

There isn’t a Russian family who didn’t know of someone arrested and executed or sent to the northern fringes of the country to serve time as a political prisoner. In our family, it was my mother’s uncle, who was sentenced to years in a labor camp for telling a joke. He never returned.

Sasha’s life in the novel is different from my sister’s, but the settings and the drama school training are real. Sasha’s character is pretty much Marina’s character: she is ambitious, tenacious, and strong-willed.

Some other characters in the book are also based on real people.

My mother was a mirror image of my motherland: overbearing, protective, difficult to leave. She may not have been as harsh as Sasha’s mother, but she was tough and controlling – a survivor of famine, Stalin’s terror, and the savagery of war she witnessed as a surgeon at a front-line hospital.

Yet she paled before a true authoritarian – my grandfather, the commander of the house: an incorrigible Bolshevik, rooted into the Soviet soil like an oak tree. I still remember his solidity, his overwhelming presence, his unquestionable dominance.

My grandmother, a trained opera singer who never had a chance to sing onstage, was the necessary glue that held the household together with her never-ceasing housework and her all-encompassing love.

Overall, it was my family history that became my inspiration.

Q: The author J.M. Coetzee said of the book, “Sasha’s story crackles with energy; we come away with a new understanding of why, to her generation, the arts offered the only road to freedom.” What do you think of that description, and what role did the arts play for Sasha?

A: I think J.M. Coetzee zeroed on the core of the story: to Sasha’s generation, the arts offered the only road to freedom. Life in the Russian society after WWII (and especially before Stalin’s death in 1953) was based on an enormous state-sponsored unquestionable lie.

There were two parallel realities: in one, the radio used to broadcast the advantages of our happy Soviet present and bright communist future, while in the other – the everyday reality – there were empty store shelves, arrests, and fear. 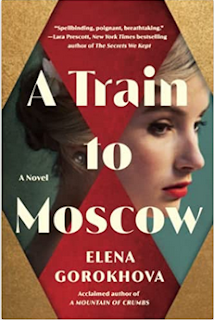 The only truth one could find under those conditions was in the arts. The arts – whether acting or painting - did not tolerate falsehoods. They were based on truth, the same truth that was missing from Soviet life.

Unfortunately, today’s Russia is back to that huge, Orwellian lie:  a war cannot be called a war, occupation equals liberation, any news that clash with Putin’s propaganda is fake news. Again, artists are the only ones seeking the truth.

A: I read a few books to immerse myself into the granular details of The Great Patriotic War (as WWII is called in Russia). Vasily Grossman’s firsthand accounts were particularly valuable (he was a military correspondent who traveled with the Soviet Army all the way to Berlin).

I read the illuminating books by Svetlana Alexievich, who synthesized the experiences of Russians during and after the war. It was all very difficult reading because these books detail the savagery of the war and Stalin’s brutality.

But most of the setting comes from the stories my family told me. My mother’s two brothers never came back from the war. One of them was an artist, whose story is fused into the book.

The other uncle was stationed at the border between Russia and Poland, a tiny cog in the unprepared Soviet Army that didn’t even issue guns to its untrained draftees. Officially, he is still missing in action.

In the novel, the two switched places. The artist became the soldier missing in action, and all those What if questions sprang up in my mind, laying the groundwork for his story.

What if he wasn’t killed and made it all the way to Berlin? What if he, unlike his staunch communist father, questioned the infallibility of his righteous motherland and the façade of lies erected and safeguarded by its leaders?

Q: Can you say more about how you would compare the Soviet Union you write about with Russia today?

A: Today’s Russia, alas, is very similar to the Soviet Russia I grew up in the 1960s and 1970s, and it is moving even further back in time, toward the absolute dictatorship of Stalin’s reign.

The last independent newspaper in the country, Novaya Gazeta (whose editor won the 2021 Nobel Peace Prize) has recently been ordered to close. Russian television, fully controlled by the government, broadcasts nothing but Putin’s propaganda about “Ukrainian Nazis” and “Russian liberators.”

New repressions are being introduced almost every day. These days, one is arrested for holding a blank sign or standing on a street corner with a flower. One can be imprisoned for 15 years for simply calling this war a war.

So far more than 15,000 people have been arrested and awaiting trials. Over a quarter million Russians have already left the country. It breaks my heart to see how history repeats itself.

A: I am working on another novel. It is also set in Russia, in the 1970s. It is too early to say anything else about it other than it has to do with banned books.