Danni Quintos is the author of the new poetry collection Two Brown Dots. She also has written the chapbook Python, and her work has appeared in a variety of publications, including Poetry and Cream City Review. Also an educator, she lives in Lexington, Kentucky.

Q: Over how long a period did you write the poems in Two Brown Dots?

Q: The poet Nikky Finney said of the book, "Who but the Filipina girl...could turn the hurt and brutality, the invisibility of coming of age in late 20th century America, into an iridescent book of modern day brown girl psalms." What do you think of that description?

A: I love these words from Nikky! What a compliment, the idea that one could use poetry to turn wounds into psalms!

A: I found the title buried in a poem. I feel like the title is so closely associated with one of my writing besties. I hadn't really considered it 'til now, but the poem, "Boobs," I wrote long ago while attending the Kentucky Women Writers Conference. 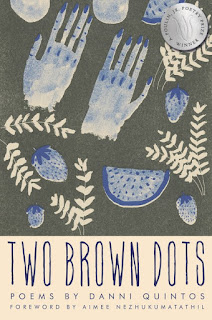 This friend read an early draft of that poem and said, "Two brown dots!" and then something like five years later that same friend read an early version of my book manuscript with its new title. We worked so closely together on our theses at IU, it makes sense that this person would be integral to my book's title and existence.

The significance of the dots is sort of two-fold. I've been told that this book has some "boob energy," which I absolutely love so much.

The dots are nipples in the poem, "Boobs," but they also stand for my sister and me growing up in Lexington, Kentucky in the ‘90s. There wasn't a very big Fil-Am community, so we were often like two brown dots in a sea of white folks.

A: This is a tough question. I guess I hope that readers enjoy the humor and the ‘90s nostalgia, but also I hope they feel a little weird. I'm okay with making some folks feel weird.

I hope that brown kids growing up among a lot of white people, experiencing casual racism and being made to feel invisible yet hypervisible, I hope those kids read my book and feel a little seen. Especially the weird ones.

A: If you like boob energy, girlhood, monsters, mom stuff, AAPI/Fil-Am stuff, ‘90s pubescent nostalgia, or feeling weird, this book might be for you. If it's not, that's okay too.