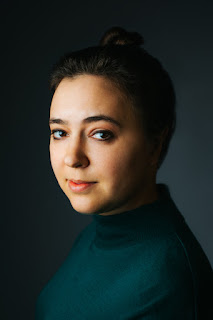 Adrienne Celt is the author of the new novel End of the World House. Her other books include the novel Invitation to a Bonfire, and her work has appeared in a variety of publications, including Esquire and The Kenyon Review. Also a cartoonist, she lives in Tucson, Arizona.

Q: What inspired you to write End of the World House, and how did you create your character Bertie?

A: I wanted to write a novel that used its own structure as an element of its plot: that was the genesis of making Bertie and Kate live through the same day on repeat. The repetition creates suspense for a reader: when will the characters become aware of the loop? Can I spot any differences day to day? How long will this go on, and why is it happening?

Through structure, you can impose those questions without having to ask them directly. So it's simultaneously subtle and overt in a way that appeals to me.

It's also tricky, because the days have to be similar enough for readers to feel and appreciate the rhythm, but the book still has to move forwards, and the characters still have to progress.

That would have been easier if I made Bertie and Kate aware of the time loop from the beginning, the way, say, Bill Murray's character in Groundhog Day is—then it's just a matter of the character reacting to their situation. (Which is not me knocking Groundhog Day by any means: I just didn't feel the need to write that movie again.)

But I wanted to use the repetitions as a kind of motif as well, which is embedded very deeply in who Bertie is as a person. And for Bertie, repetition is built into her life so completely that she's not always aware that it's there. Or at any rate, she's not aware how dependent she is on it.

She has a job which she doesn't like, but she stays in it because it's comfortable, even when it's evident that her company is contributing to the world's overall decline. She's emotionally dependent on her best friend, and doesn't want anything about that to change.

She's a living expression of both the pain and the comfort of stuckness. (And is so in a way that I think is relatable for a lot of people. Lots of people feel like they're living essentially the same day over and over again, and no matter how frustrating it can be, changing the situation seems even more frightening.)

So on one level, both Bertie and the book came from the same impulse, which was to explore the ways we can dig in our heels and resist change, even when it's deeply necessary.

Q: The author Brandon Hobson said of the book, “Adrienne Celt's End of the World House brilliantly captures our swelling fears of the world we live in today, but it's way more than that. It's also a severely smart and surreal examination of friendship and capitalism that is both terrifying and beautiful and strikes deeply at readers' emotions.” What do you think of that description?

A: I think this description is terrific, and captures a great many of the book's interests in a very brief space. I love Brandon's work, and feel a kinship with the way he approaches storytelling, so I was thrilled that he saw and appreciated what I was trying to do.

Part of what I was describing in my previous response, in terms of Bertie's feelings of stuckness, has to do—as Brandon observes—with capitalism.

That is, with Bertie's place within a large social and economic structure that she isn't responsible for, but still contributes to and benefits from (in terms of the company where she works and the comfortable life that she leads as the world is, more broadly, falling apart around her).

Capitalism as such isn't what traps her in the time loop or the Louvre, but her reaction to one is very much related to her reaction to the other—and also related to the particular nature of her friendship with and devotion to Kate. 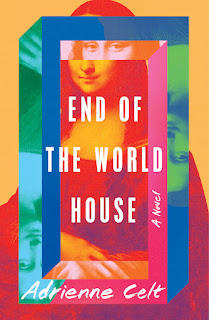 Q: What do you think the novel says about the concept of time?

A: I'm a fan of the term "speculative fiction" because it suggests that a book like mine is not making pronouncements so much as it is asking questions, and offering possibilities, not answers.

So, although I am very interested in the nature of time—and how it exists in relation to our perception of reality, identity, and cause and effect—I went into this novel with the intention of exploring these possibilities on a human scale, not offering a scientific theory.

When I think about time, personally, I think about determinism: how each of our actions is governed by a set of circumstances far beyond our control. And how sometimes the free-est choices we make are on the smallest scale, the random and chaotic moments in our day to day.

So one one level, the book is interested in how those small choices make a difference to the outcome of our lives. And on another level, it's interested in how all our choices, large and small, can be overwhelmed by forces that are beyond us, which we can't necessarily change or escape.

Q: Why did you choose the Louvre as the location for much of the novel?

A: In part, it was pure wish fulfillment: I could spend my life in museums. And writing a novel that is, at least partially, set in one meant that I was able to live there mentally for as long as I was working on the book. (Not to mention, if offered wonderful justification for a research trip to Paris.)

There is a special atmosphere that surrounds large museums, these massive and palatial collections of beauty and creativity—and I wished both to borrow it for the book, and simply to experience it for as long as I could.

But also, I look at the setting for a novel as an extension or in fact an expression of the novel's themes. In End of the World House, I was interested in the special gravity that art can exert once it gets a bit of fame or renown; how we subconsciously believe that the merit of an artwork exists in that fame.

Which is to say, I wanted to sit for a while with the question of why we like what we (think we) like. Is taste as pure or innate as we want to believe it is? And if not, to what extent do the stories that surround famous objects (or stories, or films) change the way we see them, for better or worse?

Since Bertie is an artist herself, these questions are intensely personal for her, because they speak to the way she views her own work, her own success or failure, her own taste. And that meant the setting was always offering something for her to push up and react against.

A: A new book, which is too new to talk about; a few stories; some essays; and a lot of comics. Bertie is a cartoonist, and although I've been drawing cartoons for my webcomic (loveamongthelampreys.com) for years now, the novel has inspired me to dive in a bit more deeply to that side of my art.

A: One big thing and two smaller things:

First, the big news is that my second novel Invitation to a Bonfire is currently being adapted as a TV series for AMC. This has been in the works for a long while and just got greenlit earlier this year, so I'm very excited about it, and I hope anyone who enjoyed the novel (or people who are just hearing about it for the first time) will check out the show when it comes out, probably in 2023.

Then, the two smaller (but still fun) things:

For anyone interested in a short story about social niceties, ghosts, and fear of the dentist, I published one earlier this year in TriQuarterly, which you can read online for free. And, for anyone curious about some of my newer cartoons, I published a Valentine's Day comic in the journal HAD this year—a bit out of date now, but still fun, I hope!