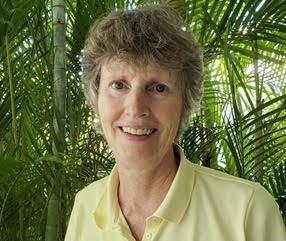 Becky Bohan is the author of the novel A Light on Altered Land. Her other books include the novel The Santorini Setup. She lives in North Fort Myers, Florida.

Q: How did you come up with the idea for A Light on Altered Land, and for your characters Ellie and Kathryn?

A: I wanted to write a book about women, women in their 60s, who are psychologically healthy and bring their life experience to the story and could model good communications skills.

So many books have characters who are psychologically damaged, who are lying--their behavior is not very exemplary. I wanted to show two women with integrity.

It grew out of the Patricia Highsmith novel The Price of Salt, which was a movie with Cate Blanchett and Rooney Mara. It took place in the ‘50s. It resonated with me. The relationship between the women was not legal; they were on the run. I transformed it in my book—they were traveling, and faced an issue with cannabis.

People have commented on how the two characters communicate—they solve their problems through honest, open communication.

Kathryn is loosely based on my sister-in-law, Diane Manahan. She was a nurse and psychotherapist, and died at 60 of breast cancer. Kathryn was infused with a lot of Diane.

Ellie is a mix between my wife, Nancy Manahan, and myself. There are a mix of traits in there—the old feminist background of the ’60s and ‘70s, and trying to adjust to new ways.

Q: Can you say more about the relationship between your novel and Patricia Highsmith’s The Price of Salt?

A: Patricia Highsmith’s story takes place in the 1950s. Two people meet by chance—in that book, it’s in a store, in my book, in a coffee shop. Sparks happen almost immediately. The character is getting to know someone quite different from herself.

[In Highsmith’s story,] Carol is a social superior to the store clerk. Kathryn is a country club divorcee, and Ellie is a community college teacher, so there is a socioeconomic gap. 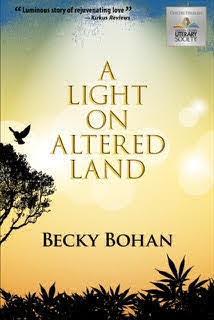 The flight Carol and Therese take across the country was escaping the norms so they could be together as lovers. In my book, the world has changed. Women can get married. I had a piece that skirts the law—the marijuana.

I also wanted to show the beauty of the American West. It reflects the lives of these characters.

At the end of Patricia Highsmith’s novel, I wanted to know what happened to those characters. I have written a sequel that I was not able to publish because of copyright issues, but that gave me practice writing in Highsmith’s style.

Her two characters informed mine, although mine are older and wiser!

A: I really didn’t know how it was going to end. I knew the two characters were driving out West, and coming back with some product in the car. Things bubbled up as I wrote.

A: I spent a lot of time trying to come up with the title. It reflects two things in the book—light and land.

The landscape the two women drive through changes. I live in Florida, and when one sinkhole occurs, the land shifts under us in the way life shifts for the characters. Ellie had lost her wife, and Kathryn lost her husband to a younger woman. They’re dealing with an unknown world.

Both are downsizing, dealing with ageism, how we’re perceived and ignored. Especially with Kathryn, she’s been heterosexual her whole life, and how is finding herself attracted to another woman. It’s a big shift.

Light comes with the theme of illumination. Kathryn is a therapist. She wants things out in the open. The two women can talk about the issues they have, and by illuminating them, can come to some understanding.

A: I just rereleased The Santorini Setup, a rewrite of a novel I put out in 1993. I am working on a sequel to A Light on Altered Land, which takes place four years after the end of the book. Ellie and Kathryn are living together, and it is Covid time.

A: I would like people to know that one of the themes is that what seems like a setback can open new opportunities. The two characters have faced loss, and the world is opening up to them. Romantic love is possible.

The art of aging is adapting to change and loss, and being open to opportunities. People should trust the path they’re on.