Roger Craik is the author of the new poetry collection In Other Days. His other books include the poetry collection Down Stranger Roads, and his work has appeared in a variety of publications, including The Formalist and Fulcrum. He is professor emeritus of English at Kent State University.

Q: Over how long a period did you write the poems in In Other Days?

A: Some of the poems came from the mid 2000s, as far as I recall, but the majority were written since 2014, when my book Down Stranger Roads came out. There might even have been some that were worked up from efforts in the late 1990s.

Q: The poet Donald Revell says of the collection, “Craik adventures far beyond pathos and nostalgia, into something like a prospect of eternity.” What do you think of that description?

A: It’s always interesting, don’t you think, to hear what people think about your stuff. I am not sure exactly what Donald Revell means by “something like a prospect of eternity,” although it’s pleasing to read that the poems reach to this extent, and present such a long perspective.

I so like his word “adventures”— what a fine verb this is. It suggests to me a boldness and also, somehow, an enjoyment.

In the collection are many subjects, and viewpoints, in the minds of real or imaginary others.

There is a piece, “Exile,” about a Russian painter from a tiny village, who spends four years in Paris as an art student, and at the end of that time has to return to Russia for an arranged marriage, unwillingly, and perhaps (the poem leaves this uncertain) jumps off a stationary train in the middle of nowhere.

I suppose some of this came from reading about Marc Chagall, but that is all, and everything else came out of my head. I am not given to jumping off stationary trains.

There is a poem about a scientist in Cambridge, England, who makes a tremendous discovery (the poem doesn’t say what it is), tries it out time after time in his office (“it works every time”), then puts on his coat and hat and strolls home, with the discovery in his head, the early evening streets being as they always are at that time of day.

Another poem is in the voice of the widow of Cain, mentioned very briefly in the Old Testament, whom I portray as slightly turned in her mind (with syntax to match).

I (unallowably perhaps) imagined what it would be like for a Holocaust survivor to be interviewed in rich, apparently secure, New York, and misspeak, or there be some technical glitch, and he has to say it all again, realizing how like an actor he sounds, and not himself, and, far worse, somehow betraying what he remembers.

I wonder if these are things such as Donald Revell means by “adventuring”?

There is a poem in which the speaker’s mother is dying, and he starts fantasizing about being in Amsterdam and drinking fine Dutch coffee there, Douwe and Egberts, and the lines came to me as smearing themselves all over the page when he starts thinking of his plane in the clouds, Amsterdam-bound. It just came out that way. 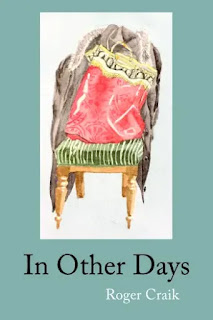 The poems are of different lengths, Deborah. One has only seven lines, and is about how depressing, and daunting, it can be to read an anthology of very good poetry, and how immeasurably better it is than one’s own.

One is a paragraph of prose, an early childhood scene in Leicestershire, by the Grand Union Canal.

At any rate, I think it is good that people, in whatever form of making they are involved, take risks, as long as those risks do not produce something gimmicky and contrived-sounding.

A: That’s always a problem, or it is with me, at any rate. Some of the pieces found their place easily: there is a rough chronological autobiographical, or semi-autobiographical, pattern, from early childhood to my mother’s death, in 2015.

That left all the others in between. Some of them just “felt” right next to each other: I can’t put it any other way than that.

I laid the sheets out all over my living floor and stood over them like Jackson Pollock —well, not exactly like Jackson Pollock—moving this and shifting that, and back again. That helped, because they are all there, right in front of you, and the considering is based on looking and seeing at the time, and not on remembering.

I deliberately didn’t try to have the individual poems “speak” to each other, but I did try for variety. I didn’t want there to be too many “English” (in the sense of being about England) poems in a row, if any row.

So once, when I sensed that this was happening, I inserted a poem about the Soviet gymnast Olga Korbut, and how her later life might be.

There is a long effort about A. A. Milne, and also one of a mere six lines, about the trickle of milk in that painting by Vermeer — you know the one.

Occasionally I would think of what Philip Larkin wryly said in answer to a question similar to yours, Deborah: “if the reader doesn’t like this poem, then I hope he dislikes the next one a little less.” Or something like that.

A: The words “in other days” appear in one of the poems, about my mother’s illness, but it actually comes from Walter de la Mare, whose work I enjoy greatly. I think it’s the last line of a poem of his, but I don’t remember the title.

I thought the words might arch over the collection. It’s literally true insofar as past, but “in other days” would loop into the future, too, if I ever found myself writing about that, or if a poem happened to work that way in a reader’s mind.

I always find it hard to settle on a title, and for the last book, Down Stranger Roads, I quarried the manuscript for something that might work as one.

A: I nearly mentioned this in your last question! I’m gathering together poems for a book for which, for once, I do have a title, Alightings.

Isn’t it curious that there are some words that mean two opposite things? I plan to have a photograph of agitated pigeons on or just above a sidewalk, and it won’t be clear if they are taking off, or landing.

And one more thing: when a new book comes out, it always feels to me as if it’s in the past, even though it is new for others. That said, the pleasure of others is a great pleasure in itself. But, back to the former strand, the work in progress is more fulfilling than the published work.

A: Just that I so enjoy living in America and being a citizen. I’m English by birth, and lived there until I was 30, and then went to work in Turkish universities.

I’ve been in America since 1991 and never miss England. America was the saving and making of me, and I feel gratitude. And the wildlife is a joy. It’s a great happiness to see a groundhog snuffling around at its concerns.